And the guys who run the Emerging Markets Internet & Ecommerce ETF (EMQQ) will pay you $100,000 to prove them wrong.

But if you’re up for the challenge, here’s your chance…

According to the rules, investors must find 20 publicly traded companies that:

And there’s no “cherry picking.” That means you must derive all 20 companies from a rules-based index methodology. (Revenue growth alone cannot be a rule.)

Although we find this challenge intriguing, trying to find this level of growth is hard to do for a single company… let alone 20 companies.

The better money-making opportunity is to follow these smart guys into the internet and e-commerce companies of emerging markets. Here’s why…

The Biggest Growth Opportunity in History

In the past, investors viewed emerging markets mainly as commodities producers and exporters. But that story is changing.

Today, they’re becoming more consumer-oriented. That’s due to the growth of the middle class in these countries…

According to research firm McKinsey & Company, annual consumption in emerging markets will reach $30 trillion by 2025—up from $10 trillion in 2016. The firm calls emerging markets “the biggest growth opportunity in the history of capitalism.”

Three trends are driving this growth…

Of the top 20 countries ranked by population size, just three are developed countries: Germany, Japan, and the United States. The rest are developing nations.

Even if just a small share of emerging market populations moves into the middle class, we’re talking about billions of people. And like their peers in the developed world, they’ll buy homes, cars, and other consumer goods like electronics.

According to the Pew Research Center, smartphone use in the developing world is growing exponentially. For example, usage rates climbed from 21% in 2013 to 37% in 2015. Market research company Statista projects usage to grow over 40% by 2021.

Smartphones will change the way consumers shop, date, play video games, and even hail cabs. For example, one survey found that 76% of smartphone users in developing nations use social networking sites, such as Facebook and Twitter.

Increased smartphone use will be a boon to emerging market e-commerce companies, the same way it’s been a boost to companies like Amazon in the United States.

According to the International Telecommunication Union, only 40% of people in the developing world have internet access. That’s compared to 81% in the developed world. So there’s plenty of room for growth.

As more people in emerging markets turn to smartphones, demand for internet access will naturally skyrocket, too.

How to Play This Trend

With these three powerful tailwinds, it’s no surprise that EMQQ outperformed the S&P 500 until the trade war tensions broke out in mid-2018. (The trade war has dampened sentiment for many foreign stocks. More on that below.) 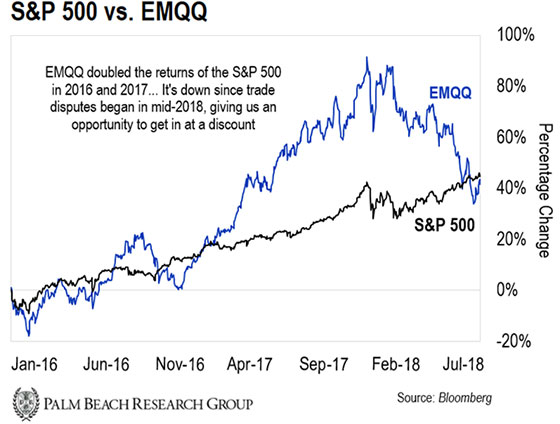 Emerging market platform companies have powered much of that growth. These are companies that allow consumers and producers to connect with each other and exchange goods, services, and information.

(The biggest platforms in the United States are Amazon, Facebook, and Google. They are three of the five biggest U.S. companies by market cap.)

Below is a table of some of the fund’s top holdings. They’re some of the best platform companies in the developing world.

Most of these companies are traded on U.S. exchanges. But the simplest way to add exposure to the growth of e-commerce in emerging markets is through EMQQ.

As mentioned above, the fund has taken a hit due to the trade war… But that just means you can get in at a discount.

Furthermore, regular readers know we think the trade war is overblown. So the fund—which is down about 15% in 2018—should pick up steam as long as trade disputes don’t linger or escalate.

And if you’re up for the $100,000 challenge, click here to contact the fund. Be sure to let us know how it goes right here.

From Neil S.: I’ve been an Infinity member for about four years. PBRG isn’t just your “run of the mill” stock pickers. It offers so many investing strategies to explore. I thank Teeka, though, for his crypto knowledge. I have read other crypto recommendations… and none of them have the insight and connections that he has.

I followed his advice into the world of crypto in 2016. At the time, my retirement was at least 15 years away. However, because of his advice, I retired in February 2018.

I’ve referred several of my friends to PBRG. The ones that subscribed are very pleased they did. As for me, I still get excited anticipating the next recommendation. Get onboard now!

From Roger N.: In November and December 2017, I bought a number of cryptos that Teeka recommended. In January 2018, I saw 200% gains. So now I know from experience what the opportunities are.

I’m waiting for the market to turn positive again to create a very large profit. One of the reasons that I chose to subscribe was because I need to build up my pension capital again in a few years’ time. I’m 60 years old now.

Starting November 14, one piece of technology is poised to go mainstream. And when it does, it’ll send a handful of tech companies soaring…

Silicon Valley insider Jeff Brown says the next few weeks could be one of the best times ever to invest in them. Get a sneak peek at his top pick right here… 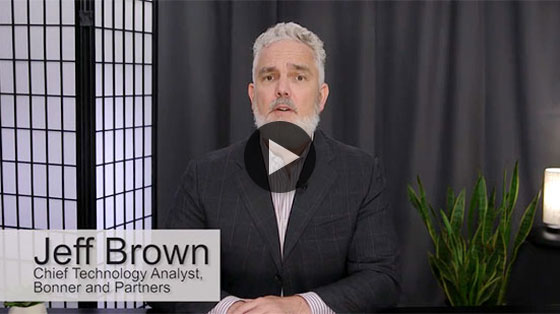