Jeff has decades of experience in the technology industry… And thanks to his direct connection to Silicon Valley’s inner circle, he often has the inside track on big tech news before it hits the mainstream media.

In today’s essay, Jeff shows you why technological advances will make your home internet faster… and what it means for investors.

According to the American Customer Satisfaction Index—a yearly measure of consumer satisfaction for a broad range of U.S. companies—internet service providers (ISPs) are the most disliked companies in America. They were ranked even lower than airlines. And people hate airlines.

In the most recent report, ISPs received an industry rating of 62. That’s the lowest rating across every industry the index monitors… and the lowest overall since its inception. 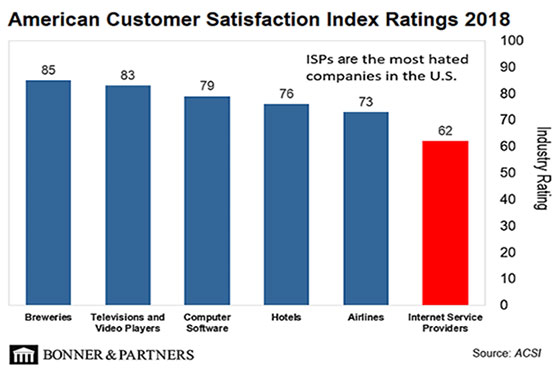 I say this is not so surprising because it isn’t a new trend. ISPs, the companies that provide consumers internet access in their homes, have consistently been ranked the most-hated industry in America.

For anyone who’s had to call their ISP to fix a stalled internet connection (or worse, dispute a mysterious new charge on their bill), this statistic isn’t a surprise. It can be an immensely frustrating process.

But I have good news. Thanks to a new, developing technology, these legacy ISPs like Spectrum (formerly Time Warner Cable) and Comcast (also known as Xfinity) are going to be forced to improve the quality of their customer service and support… or die.

On top of that, the internet in your home will be, on average, at least five times faster.

Why is it that ISPs are so hated?

One of the main reasons is that these companies exist as pseudo-monopolies.

I say “pseudo-monopolies” because while there are several ISPs across the country, in reality, they rarely compete with one another. Their territories rarely overlap, and for most households, consumers really only have one choice for high-speed internet access.

A recent report from the Federal Communications Commission (FCC) found that little more than one-third of the population have more than one ISP that offers speeds of 25 Mbps (the FCC’s minimum speed for broadband internet).

So if you live in the Midwest, you likely have Mediacom.

And on the West Coast? You’re probably an Xfinity by Comcast customer.

What this means is that there’s a lack of competition. These companies have absolutely no incentive to improve their customer service or provide better products. After all, they know their customers won’t leave them.

Really, what are you going to do? Not have an internet connection? It’s simply not an option today.

Thankfully, that won’t be the case for much longer. A new technology has emerged to challenge the incumbent ISPs. And the infrastructure to enable this technology is being built right now in many developed markets.

It will bring badly needed competition to the space, and give consumers a real choice for their at-home internet service.

The companies that will threaten legacy ISPs are wireless network providers like AT&T, Verizon, and the soon-to-be-merged T-Mobile and Sprint. That’s because these companies are currently funding the buildout of these 5G networks in the U.S.

One of the biggest emerging trends this year is fifth-generation (5G) wireless technology.

It’s a trend that I’m deeply connected with, having worked for many years as an executive in the wireless industry with the top wireless network operators around the world.

I’ve already shown my readers how 5G will enable a suite of new technologies: fleets of self-driving cars, holographic telecommunications, and even robotic surgeries performed from thousands of miles away. All these technologies will be made possible thanks to 5G.

But there’s a delay between when the wireless 5G networks will be built out nationwide and the deployment of these new technologies. So for most of us, our first experience with 5G will be through wireless internet services to our homes.

Right now, you likely have a cable modem in your home. It has a bunch of wires sticking in and out of it, and connects to your local cable TV network.

You likely know from personal experience that setting these up can be a hassle. But with a 5G wireless internet router, there would only be one cord to plug in: the power cord…

That’s it. Plug in your 5G router to an electrical outlet, and you’ll be good to go.

And this isn’t far off in the future. Verizon already offers 5G internet connections to customers in Sacramento, Los Angeles, Houston, and Indianapolis. The 5G router looks something like this: 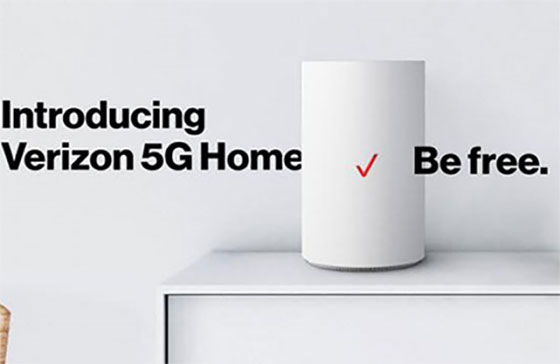 What sort of difference will 5G-powered home internet make?

It will be far faster than anything the ISPs have ever offered—as I mentioned, at least five times faster than the national average today.

With a 5G connection in your home, movies that are hours long will download in a matter of seconds. Online voice and video calls will be crystal clear. Slow-loading web pages will be a thing of the past.

With that kind of service, why would anybody stay with the incumbent ISPs?

Customers will leave these ISPs in favor of 5G-powered home internet services from one of the wireless network companies instead.

And it’s not just Verizon building out these 5G networks.

AT&T is building out its first 5G network in Waco, Texas. It also has a long list of cities it aims to have an early presence in by the end of the year. One of them will likely be Atlanta.

T-Mobile isn’t far behind, either, aiming to have 1.9 million in-home 5G wireless broadband internet customers by 2021. Along with its imminent merger with Sprint, this would put it on track to becoming the fourth-largest ISP in the U.S.

When these 5G networks are ready, don’t be surprised to see more 5G services offered by wireless carriers.

And for investors, there are areas you can look at if you’d like to gain exposure to this early stage consumer application.

One place to start your research is with networking hardware company Cisco Systems (CSCO). Cisco provides many of the internet routers that are required to get online and handle all the data from 5G wireless services. With data usage continuing to climb and 5G routers rolling out in homes across America, network infrastructure from Cisco will be an essential part of the 5G future.

All told, 5G is expected to unleash $12 trillion in wealth over the coming years. It will be the biggest investment opportunity of the next decade.

It will start with faster internet in your home. But then, it will spread to every aspect of our lives. We are just at the early stages of this trend.

P.S. Tomorrow night, I’ll be hosting a free webinar. I’ll share the full details of the 5G network buildout… and show you how this technology is poised to reshape entire industries. Plus, I’ll even share the names of four companies currently on my “5G watchlist.” Save your spot right here.

Readers weigh in on last Friday’s essay, “Brazil Just Elected the ‘Trump of the Tropics’”…

From Russell I.: Awesome. Trump has helped this country tremendously… So hopefully, this man can help Brazil. Anyone is better than a Democrat.

From Wynn R.: The letter from Robert C. is symptomatic of what is happening to our country today (see Friday’s Mailbag). Politicization is pervasive, and it’s beginning to dominate practically every aspect of our society… even the restroom.

As a nation, we seem to be devolving from a rational, tolerant people into rigidly dogmatic, intolerant political tribes. Your reply was very appropriate. There are still areas (including the restroom and investing) where politics have no place.

Another reader has a question for our Wall Street insider, Jason Bodner (see last Thursday’s issue, “Why Our Wall Street Insider Is Still Bullish”)…

From Diamond B.: Great article by Jason. I’m wondering… What can we do to hunt for those bargain stocks that he thinks will be very profitable in the near future?

Nick’s Reply: Stay tuned, Diamond. We’ll have more from Jason soon. Meanwhile, you can continue to send your questions for Jason right here.

If you own a single ounce of gold, you need to see this message before the market opens tomorrow.

Multimillionaire gold speculator Doug Casey says, “This is the one investment you need to hold in addition to physical gold.”

THIS should be mandatory viewing for any Daily reader. 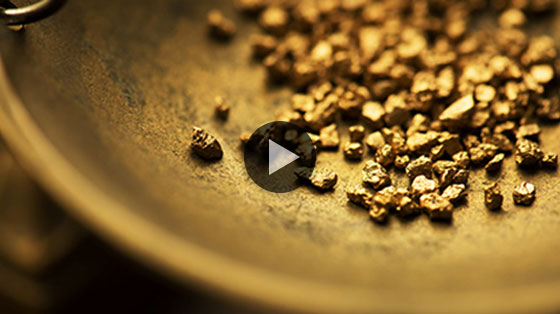