Nick’s Note: The rise of bitcoin is creating profitable niche opportunities for those daring enough to take them. Palm Beach Confidential analyst Greg Wilson has found a couple of these ideas (he’ll share the second tomorrow) that you probably won’t see anywhere else…

Today, I’m going to share with you a new way to make money off bitcoin.

Here’s the thing. The idea is kind of crazy. For 99% of you, it’s not practical at all.

But for the adventurous traveler, it might be a dream come true.

The strategy is called arbitrage.

That’s where you take advantage of different prices in different places.

For example, let’s say you found a rare book on eBay that you could sell to a local bookstore for $150.

Now, if you can do it with bitcoin, you could consider yourself a bitcoin exporter. Today, I’ll show you how you could potentially make up to $50,000 on this strategy.

But first, let me share a story with you so that you understand the opportunity.

A Crisis Leads to Opportunities

When intrepid reporter Frisco d’Anconia finally reached the teller, it was 1:30 in the afternoon.

He had been standing in line since 9:30 in the morning. All to receive a few bucks from a Western Union.

This is not uncommon in Zimbabwe. And it happens across Africa, where 80% of the adult population is unbanked.

Currency instability has been a fact of life in Zimbabwe since the late 1990s. It reached its zenith in November 2008, when inflation peaked at 79.6 billion percent.

In response, Zimbabwe printed a 100-trillion-dollar note. It was worth only 40 cents when it went out of circulation.

Those notes are now collector’s items. 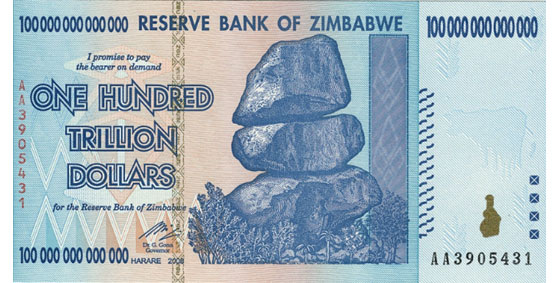 The $100 trillion Zimbabwe note is now a collector’s item

Inflation got so bad that the government ditched the Zimbabwe dollar for the U.S. dollar.

There’s a shortage of U.S. dollars. And that’s causing massive disruption to daily life in Zimbabwe.

Long lines are the norm. Banks limit withdrawals to $100 or even less.

So, it’s no surprise bitcoin has been recently quoted at $12,347 in Zimbabwe. At the time of this writing, that was a 75% premium to worldwide prices.

Back to Frisco. As I mentioned, he’s a reporter. And he writes about bitcoin and cryptocurrencies.

And while waiting in line at the Western Union, he took matters into his own hands.

He helped five people set up their own bitcoin wallets… and sold them each bitcoin to get them started.

As a journalist who travels the world, Frisco could have bought the bitcoin anywhere.

And if he bought in the United States, for example, and then sold it in Zimbabwe, he would now be a bitcoin exporter.

And that got me thinking… Why couldn’t someone else do the same?

As I write, you can buy bitcoin for around $7,045 on major bitcoin exchanges around the world.

But on the Golix exchange (formerly BitcoinFundi) in Zimbabwe, bitcoin is selling for $12,347 per coin right now.

That means for every bitcoin you export, there’s the potential to make $5,302.

And you can get a hotel room in Harare for less than $35 per night.

So, your profits would be more than enough to cover the trip expenses.

But it’s not a bad idea if you want to travel the world.

If you go, please write in and let me know about your experience.

P.S. Last night, my colleague Teeka Tiwari hosted a special cryptocurrency briefing called the “$1 Million Dollar Bitcoin Giveaway.” More than 250,000 people registered in advance to watch. That’s the most we’ve ever had for an event.

We realize that thousands of people who wanted to attend this special event couldn’t. So we’re making a replay available.

Each month, we update our Elite 25 portfolio. We remove stocks that are too expensive and replace them with new stocks that meet our three criteria for elite status.

In October, we gave back some of our outsized gains from September. The Elite 25 was down 2.8% on the month, while the market was up 2.2%.

Like I’ve said, we’re not going to outperform the market every month. Sometimes it takes a little patience for the market to realize the true value of these companies.

The portfolio was dragged down by retail companies posting bad quarterly results. Foot Locker, Sally Beauty Holdings, and Nautilus were all down over 10%.

Starbucks has fallen out of favor with Wall Street. Earnings growth has slowed and the company has closed all its Teavana stores.

We can use this to our favor and buy into Starbucks at low prices.

From Merv N.: Please say when your service is restricted to U.S. investors only. I followed the video instructions on the Palm Beach Confidential website and went through all the trouble of trying to open a Gemini account… only to be told by Gemini that they don’t operate in Australia. Ho hum!

Nick’s Reply: Merv, did you know that we’ve published an International Guide to Buying Bitcoin for our international subscribers? The guide contains a list of where you can buy bitcoin anywhere in the world with the local currency.

Just log into your Confidential account, go to our new and improved “Crypto Corner,” and click on the “Resources” tab. You can download the guide there. You can get instructions on how to buy bitcoin in dozens of local currencies, including the Australian dollar. (The guide is also available to Palm Beach Letter subscribers.)