And America got its first glimpse of the “House of Tomorrow.”

The exhibit was the vision of Chicago architect George Fred Keck. At a time when many people were still living in sparse, wooden homes, Keck created a flowing, open home with “curtain walls of glass.”

The model home also featured some very futuristic pieces of technology. It had a dishwasher, an “iceless” refrigerator, air conditioning, and even a passive form of solar energy to heat water.

The exhibit was a hit. Popular Mechanics wrote, “In comparison with the average house, this structure is as remarkable for the ordinary features it lacks as for the extraordinary ones it possesses.” 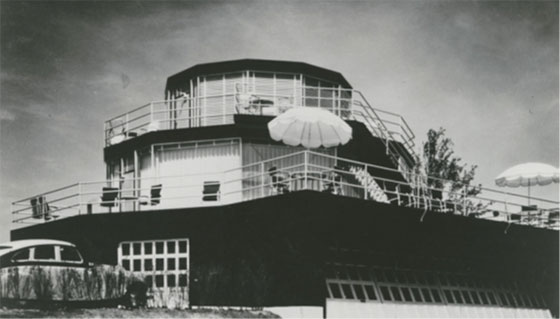 More than a million people paid 10 cents each to take a tour of the House of Tomorrow and see what the dwellings of the future might look like.

Keep in mind, this was during the depths of the Great Depression. The optimistic vision of the future must’ve been remarkable.

Fast-forward nearly 100 years, and we know that many of Keck’s visions came true: glass walls… air conditioning… even solar power. They’re all commonplace in today’s homes.

Today, I believe we’re on the verge of witnessing a second “House of Tomorrow.” And the tech that’ll power these radical transformations? Artificial intelligence (AI).

AI is the most disruptive technology today by far. And for investors who pay attention, it could mean outsized investment returns…

Ask yourself this: How much time do you spend every week making appointments or managing your calendar? If you’re like me, these small tasks add up. They distract you from more productive work.

But that’s all about to change…

In the “House of Tomorrow,” a digital assistant will take care of these tasks on your behalf.

Restaurant reservations… doctor and dentist appointments… ordering flowers for a spouse or gifts for the children and grandchildren… dealing with insurance companies… scheduling oil changes. You name it.

Amazon’s Alexa and Apple’s Siri are early iterations of this technology. But these AIs can only perform simple tasks like playing music or setting alarms. In the near future, the tasks will become far more complex.

For example, Duplex is Google’s bleeding-edge AI that can carry phone conversations just like a human. The technology is incredible. The AI sounds just like a person—including quirky mannerisms like “um” and “mhmm.”

You can watch Google Duplex schedule two different appointments by going here. The first appointment is for a haircut at a local salon. The second is for a restaurant reservation—in which the AI communicated with someone with a heavy accent.

Duplex handled both calls flawlessly. In other words, it’s Siri on steroids…

There’s no other way to say it: It’s so impressive that it’s not a stretch to imagine the widespread use of this technology.

Imagine it’s Mother’s Day. You’ll say, “Google Assistant, please send flowers to my mother on Sunday. She likes roses. The budget is $70.” And the AI will take care of it—just like that.

At writing, anyone can use this technology to schedule appointments in 48 states. And Google expects to roll out support in all 50 states soon. It’s just a matter of complying with local laws and regulations.

Plus, Google just announced its latest AI version will be 10 times faster than the first.

Better yet, the new Google Assistant can run at the “edge” of the network. In other words, it doesn’t have to connect to Google’s network every time it gets a request. It can process requests itself.

And AI isn’t just becoming commonplace in the home. It’s also becoming essential in businesses, too…

According to a November 2018 survey from McKinsey & Company, 47% of surveyed businesses said they began implementing AI into their models. In 2017, that figure was only 20%.

And according to a recent study by MIT’s Sloan Management Review, 85% of companies think AI will offer a competitive advantage.

There will soon come a time when AI won’t just be advantageous to companies—it’ll be a necessity. In the next few years, a company that fails to adopt AI into its business model will be akin to one that doesn’t use the internet today. It’ll become obsolete. 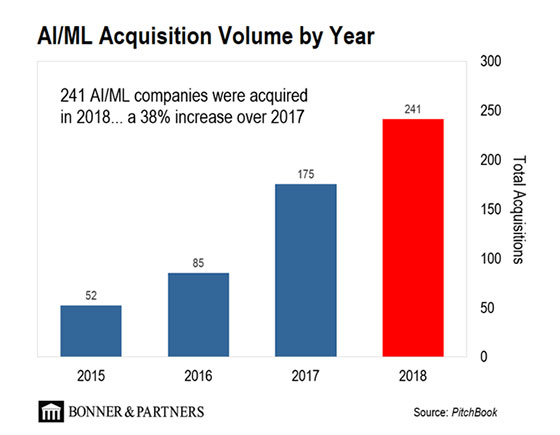 As a relatively new industry, that’s a strong indication of activity. Especially since there just aren’t many large, well-established AI companies around to acquire.

Most of the activity is in smaller, early-stage companies that haven’t reached anywhere near $1 billion-plus valuations yet.

So incumbent tech firms wanting access to AI technology and teams of engineers must go out and acquire these smaller companies.

We’ve reached an inflection point with this tech. And we’re on the cusp of explosive growth.

Few realize it, but in a matter of a few years, AI will be as commonplace as the internet. We’ll look back and wonder how we ever got along without it.

P.S. As I mentioned, I believe we’re at an inflection point of our tech future… In the next few years, technologies like AI, genetic editing, and augmented reality will change our world and lives in ways we can’t imagine.

Of course, investors stand to make a small fortune from them. And I recently shared the details of four tech companies involved in these technologies. I even revealed the name of one of them live, on camera. (Plus, I made four bold predictions about our tech future as well.)

And for a limited time, you can watch a free replay of my special event right here to learn more about them.