I’ve gotten a lot of mail recently from people wondering, “When will altcoins catch up to bitcoin?”

Before I answer that question, I need to talk about bitcoin…

We’ve seen bitcoin go as high as $14,000 this year before dropping to $9,738. Despite the pullback, it’s still up 181% year-to-date—making it among the best-performing assets in the world.

Now, I’ve been saying since April 2019 that the “Crypto Winter” bear market is over. Institutions are coming into the crypto space—and the demand for bitcoin is skyrocketing. This is still the year of Wall Street greed.

So I don’t see bitcoin flopping over and falling apart. In fact, I see it gaining even more strength from its current strength.

And this shouldn’t come as a surprise to you. Everything I’ve said about bitcoin is starting to fall into place. For example, brokerage firms like Fidelity and E-Trade will soon allow people to buy bitcoin with the click of a mouse.

Friends, what we’re seeing now is just the beginning. As you can see below, bitcoin is in a major uptrend… 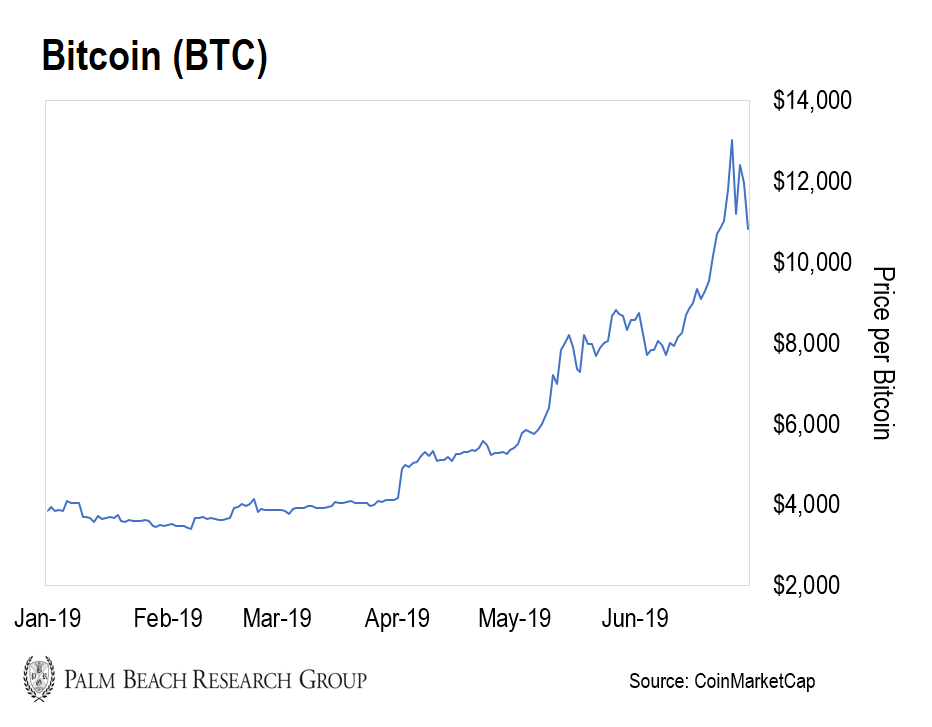 Now, bitcoin doesn’t go up in a straight line; it’s volatile. So trying to predict the next pullback after an 18-month bear market is a dangerous game.

So bitcoin could take a pause near $20,000. But once it clears that level, there’s no overhead resistance. When it decides to run, it doesn’t look back.

And that brings me to the altcoin market…

When Will Altcoins Catch Up?

Bitcoin has outperformed the altcoin market since the start of the year.

So investors fear their other coins will get left in the dust. Some folks have even asked me whether they should sell all their altcoins and go all-in on bitcoin.

It’s a good question. But before you rush out and cash in your alts for bitcoin, I want you to do one thing for me: Take a deep breath.

I want you to know what we’re seeing now is perfectly normal.

Every time crypto emerges from a brutal bear market, bitcoin always rallies first. On average, it outperforms for about six months. After that, the altcoin market catches up.

And in many instances, altcoins even surpass bitcoin—like they did during the 2016 bull run… 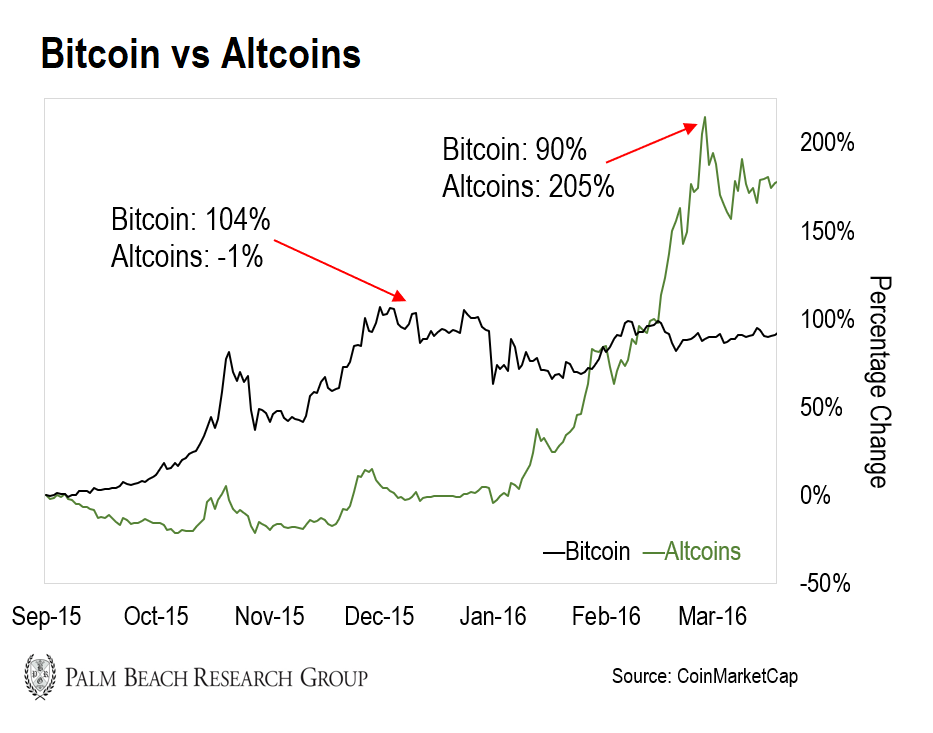 That’s why I counsel patience. This bull market is unfolding exactly as it should—with bitcoin leading the way and altcoins playing catch-up.

Look, institutions want to get into this market. They just don’t have the infrastructure to do so—yet.

But people are building the “on-ramps” and “off-ramps” that’ll allow the big money to easily get in and out of crypto assets. By year-end, institutions will have fully compliant platforms they can use to buy, sell, trade, and store cryptos.

Think about it like this: America didn’t build a highway system overnight.

Early U.S. roadways could handle no more than two cars, some horses, maybe a few bicycles, and pedestrians. The U.S. couldn’t experience a surge in commerce between states until it built the necessary infrastructure.

But you needed permits for that. You had to negotiate with each county to build highways through it. And it took years to do so.

The same is true with bitcoin. It wasn’t initially built for a massive onrush of institutional capital. But people are finally building these roadways.

Names like Fidelity, Gemini, E-Trade, and Coinbase… they’re all building the highways to connect institutional capital to the crypto markets.

Even Facebook is rolling out its “coin” to 2.4 billion people. These are soccer moms and people who aren’t necessarily interested in crypto… But all of a sudden, they’re going to be educated on cryptos by one of the largest companies in the world.

We’re only at the very beginning of this new bull market. And the profits we’ll see from the altcoin market as this money comes into crypto will be unfathomable.

We’ve sat through 18 months of a brutal bear market. The hard part is over. So now’s the time to add new ideas and be patient as this new, emerging bull market takes shape.

Because you haven’t seen anything yet.

P.S. Will you be taking advantage of this buying opportunity in altcoins before they rally higher? Let us know your crypto plans right here.