Nick’s Note: When it comes to smart speculations (investments that can turn tiny grubstakes into life-changing gains), few are better than our friends over at Casey Research.

For many people in Colorado, this was the best thing that ever happened. For others, it was a mistake. And those people will probably never see eye to eye.

Still, there’s one thing almost everyone can agree on: the economic benefits of marijuana legalization.

Marijuana legalization has generated billions of dollars for Colorado’s economy. It has created thousands of jobs. And it’s brought the state much-needed tax revenue.

In fact, the state took in almost $70 million in taxes, licenses, and fees from the marijuana industry in 2014. And that figure has only gone up.

In short, Colorado has shown what can happen when a state legalizes marijuana. So it wasn’t surprising that other states followed suit.

And nine states, plus Washington, D.C., have legalized recreational marijuana.

But this isn’t another marijuana essay.

No… I wrote this essay because Colorado’s on the verge of legalizing another black market. And just like with marijuana, this presents a huge opportunity for investors.

Until recently, sports betting was illegal in every state except Nevada.

That changed in May, when the Supreme Court struck down a 26-year-old federal law that barred single-game gambling in every U.S. state except Nevada.

Now, this doesn’t mean that the Supreme Court legalized sports betting nationwide. Instead, it gave each state the power to license, regulate, and tax sports betting within its borders.

In short, legal sports betting is sweeping the nation just like legal marijuana swept the nation.

And I have good reason to think Colorado will be the next domino to follow.

Stapleton is a Republican gubernatorial candidate. And he’s pushing to legalize sports betting for a simple reason: He wants to tax the industry. Last month, Stapleton told a group of real estate investors…

Sports gambling is coming to Colorado… I think we should assess a tax on people placing a bet and use that to build up our roads and bridges.

Now, I have no idea if Stapleton will win the election. But it may not matter.

Colorado’s state legislature is expected to look at a sports betting bill in early 2019. And that bill is reportedly being “seriously considered.”

That’s why I think Colorado could legalize sports betting within the next year. But it certainly won’t be the last state to do so.

I say this because practically every U.S. state is in dire financial conditions. Just look at the public pension system… It’s a ticking bomb.

Everyone knows this. So don’t be surprised if politicians try to buy themselves time by legalizing and taxing sports betting.

And I mean a lot…

The American Gaming Association estimates that the illegal market for sports betting brings in $150 billion every year. That puts it on par with the global marijuana industry.

But even that might be lowballing the market’s potential. In fact, Bank of America Merrill Lynch says the illegal market for sports betting is worth $200 billion.

Meanwhile, research firm Eilers & Krejcik Gaming estimates that the legal sports betting market in the U.S. was worth around $270 million last year.

That means the legal market for sports betting would become 37 times bigger if legitimate businesses captured just 5% of the underground market.

And many of the companies poised to benefit from this are publicly traded.

In other words, you can profit from the legalization of sports betting by speculating on casino and gambling stocks.

The easiest way to do this is with a fund like the VanEck Vectors Gaming ETF (BJK). This fund invests in 43 casino and gaming stocks. That makes it a relatively safe way to bet on this megatrend.

For even more upside, consider investing in small casino operators. Specifically, focus on operators located in states that recently legalized sports betting… or are likely to do so.

A Federal Communications Commission move could kickstart an infrastructure boom across America. One of these “antennas” could appear within 500 feet of your house. 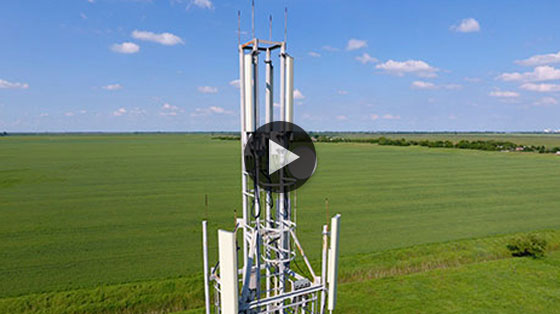