Instead, it bought this: 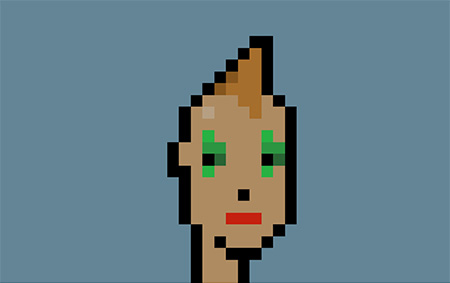 The image above is from an NFT called “CryptoPunk #7610,” and the company paid for it with Ethereum.

NFTs (short for non-fungible tokens) are digital tokens that allow you to trade all types of digital assets… And you can use them in the real and virtual worlds… but more on that in a moment.

We think NFTs will play an important role in the future of retail, social media, entertainment, and commerce…

To help our clients and partners participate, we need a firsthand understanding of the infrastructure requirements for a global brand to purchase, store, and leverage an NFT.

With our CryptoPunk purchase, we’re jumping in feet first.

But while this purchase was a first for Visa, it wasn’t the first time a CryptoPunk has sold for such a large sum… in fact, this past May a set of nine CryptoPunks sold at a Christie’s auction for $16.9 million.

This month, the average CryptoPunk sale has been just shy of $200,000.

And while some readers might find it strange that a company like Visa would pay so much for what’s essentially a digital image… the purchase is huge milestone toward mainstream acceptance of something called “the metaverse.”

Welcome to the Metaverse

Since it’s relatively new, the metaverse is a nebulous concept for most people. But we believe it’ll be the next multitrillion-dollar trend in technology.

If you’re not familiar with the metaverse, the New York Times describes it as “a variety of virtual experiences, environments, and assets that gained momentum during the online-everything shift of the pandemic. Together, these new technologies hint at what the internet will become next.”

The metaverse encompasses all types of virtual worlds many of us already use… video games… eSports… social media… digital collectibles… cryptocurrencies… and NFTs.

But the difference between the metaverse and virtual reality is that the metaverse has direct tie-ins to our “real-world” universe. It’s a modern internet of sorts.

There are even virtual economies built around its programs and games.

One example is Roblox…

My kids use real-world money to buy Roblox’s virtual currency, Robux. (I’ve supplied a few gift cards, so I know.)

They use their Robux to create avatars who interact with places, things, and other avatars. (An avatar is a virtual representation of yourself.)

These avatars can buy and sell real estate and build businesses just like in real life. What’s cool is that if you meet certain requirements… players can cash out their Robux for real dollars.

Roblox has been a big hit. It went public at a valuation of more than $38 billion in March 2021. (That’s bigger than S&P 500 companies like AutoZone, General Mills, and Motorola.)

Then there’s NFT developer Alethea AI… It just raised $16 million in a private sale of tokens to fund its iNFT (short for “intelligent NFT”) projects… NFTs that allow users to embed AI animations, interactions, and other features into their NFTs.

Fashion megabrand Ralph Lauren has begun selling virtual versions of its iconic clothing inside of Zepeto, a South Korean virtual world and social network with over 200 million users.

And international superstar DJ Deadmau5 is working on a metaverse project called Oberhasl1.

According to Gamespot, Oberhasl1 is a social hub inside the world of Core – a game-building tool – “for Deadmau5 fans to come and hang out with their friends, cross-communicate, and just have a good time with various activities.”

I know many of you may have not be familiar with Deadmau5… But he’s a six-time Grammy nominee and one of the most influential music producers in the world.

But this is just the beginning of the metaverse revolution…

Horizon Workrooms will connect people in hybrid-work and remote-work environments. “In the future, working together will be one of the main ways people use the metaverse,” CEO Mark Zuckerberg wrote in a Facebook post.

Zuck also recently said he believes that in the next five years, Facebook will be known as a metaverse company more than a social media company.

We’re only just scratching the surface of what NFTs – and the metaverse – can do.

Look, I know the metaverse sounds like something right out of Ready Player One or the Matrix trilogy. But imagine if you were growing up in the 1960s and saw the communicators used by Captain Kirk and his crew on the TV series Star Trek.

You probably wouldn’t believe they’d be the precursor to the modern-day smartphone. Today, the smartphone industry is valued at near $400 billion.

Unlike the communicators, the metaverse isn’t science fiction… It’s science fact. It’s here and it’s happening now. Visa, Facebook, and Ralph Lauren are proof this trend is taking off.

And you have a chance to get in early…

The Next Trillion-Dollar Trend

Daily editor Teeka Tiwari says it takes two things to make a fortune from the markets:

Find a massive trend in its early stages and position yourself in the right companies to ride that trend.

That’s the definition of a massive trend. And as I’ve pointed out above, we’re still in its very early stages.

Now, many of the companies that will dominate this space are in their startup phases. In fact, we’re so early that some of the dominant players in this space may not have been born yet.

But if you want exposure to this trend, consider Big Tech players like Amazon, Google, Facebook, and Roblox. Companies like this will lay the groundwork for the intersection between virtual and real economies.

And if you want broader exposure, consider the Roundhill Ball Metaverse ETF (META). It holds 50 globally-listed companies – like Tencent, Microsoft, and Roblox – actively involved in the metaverse.

If the metaverse is new to you, that’s a good thing. It’s still off the mainstream radar, so you have a chance to get in before the masses.

And remember, you don’t need to bet a lot to make a lot. This is a rare chance to put a small stake into a trillion-dollar trend and potentially see it turn into massive gains.

P.S. If the current trend continues, the metaverse and NFT market will be worth nearly $1 trillion in just a few years…

And much of that growth will be tied to a technology that Teeka predicts will mint nearly 800,000 new millionaires over that same period.

But the reality is that most Americans have no idea about the opportunity before them… or that they can position themselves to profit for as little as $10.

Click here for the full story on what Teeka predicts will be the biggest shift of wealth and power in modern history… and how you can be a part of it.