If publicly traded companies were an animal, we’d consider them an endangered species.

Over the past two decades, nearly half of the publicly traded companies in the U.S. have vanished. 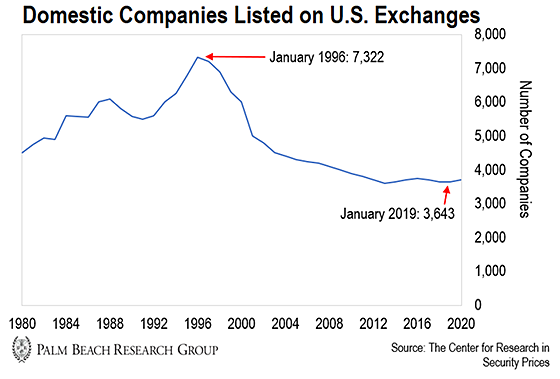 But it’s not just CRSP seeing this…

This trend isn’t set to reverse, either. A few years ago, global consulting firm McKinsey & Company projected 75% of S&P 500 companies will be gone by 2027.

And even with the recent IPO and SPAC boom, there’s still only around 4,463 public companies listed on major exchanges.

Unlike an endangered species, however, U.S. listed companies aren’t on the cusp of extinction. Instead, they’re changing their behavior.

As you can see in the chart below, in 2020 the average company stayed private for 12.5 years – more than three times longer than in 1999. 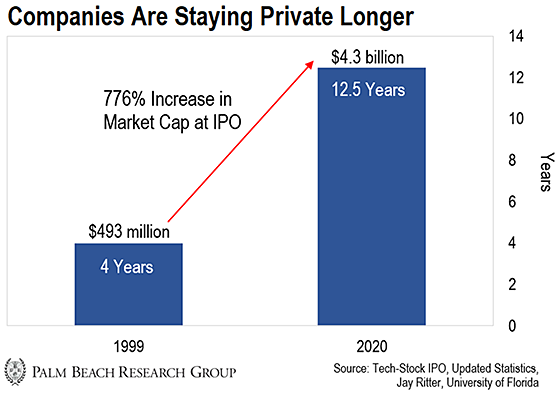 Companies are staying private longer because it’s more profitable for them. And when they eventually go public, they’ll do so at much higher valuations.

As you can see in the chart above, from 1999 to 2020, the average market cap of private companies at the initial public offering (IPO) jumped 776%.

There are fewer public companies to choose from (meaning fewer opportunities to make profits). And buyers pay a lot more for companies when they go public. 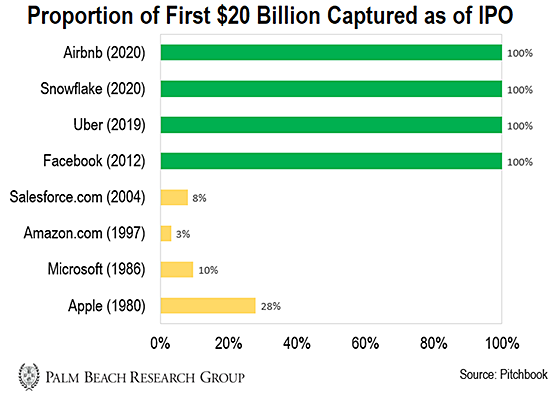 These early investors buy pre-IPO shares for pennies on the dollar… watch as pre-IPO valuations soar… and then cash out when the public money pours in on IPO day.

Basically, early investors are laughing all the way to the bank. They’re making big profits by off-loading their private company shares, with massive valuations, onto unsuspecting public market investors.

And today, it’s happening more often, and much quicker than decades ago.

So, if you really want to build your wealth, you need to consider investing in private markets.

And right now, Daily editor Teeka Tiwari has found what he believes is one of the biggest pre-IPO opportunities he’s seen in a while.

And the best part? You don’t have to be a venture capital (VC) firm, hedge fund, or millionaire to invest in it.

But to make life-changing gains in today’s public markets, you need to buy companies like Facebook, Uber, and Slack before they go public.

These are called pre-IPO deals. And they can make crypto-like gains when these companies IPO.

But finding the best deals isn’t easy. And not every pre-IPO will return a substantial profit on IPO day like Facebook, Snowflake, and Doordash.

It requires hundreds of man-hours… a team of analysts… and a network of insiders who can connect you with the best deals in the world.

And Teeka’s checked off all of those boxes with his latest pre-IPO discovery.

That’s why on Wednesday, October 6, at 8 p.m. ET, he’s holding an all-hands-on-deck emergency briefing for his next pre-IPO deal.

The man behind this deal is one of the most successful VCs of our generation. Insiders compare him to Elon Musk and Richard Branson. And 11 deals alone have built his billion-dollar fortune.

Now, you can take part in his 12th deal – before its planned IPO on the New York Stock Exchange.

Here’s why this deal is so urgent…

Teeka’s last pre-IPO recommendation at an event like this filled up in less than 12 hours. And it’s possible this deal could fill up even faster. That’s why he’s holding this urgent buy alert on deal No. 12.

The smart money has bought up eight figures’ worth of shares. And could take out the rest of the deal at any moment.

This deal is available on a first-come, first-serve basis. And considering Teeka’s last pre-IPO recommendation was taken out in less than 12 hours, it’s critical you attend on Wednesday, October 6.

The trend is clear. The number of listed companies isn’t what it used to be. And those that remain are older industries and slower-growing companies. Put simply, you need to look outside the public markets for opportunities that can really move the needle on your wealth.

Private markets are now the playground for the rich and connected. These are where the innovative and high-growth companies are found.

So, if you want to make life-changing money in the markets, private placements are the way to go. And Teeka has found a backdoor way where you can participate alongside the rich and famous.