Treasuries are on a “suicide mission.”

That’s what Jeffrey Gundlach told investors on a recent webcast.

Gundlach is a man we follow closely here at PBRG headquarters. His peers call him the “Bond King” because of his prescient calls…

Over the past eight years, Gundlach’s Total Return Bond Fund has beaten its benchmark, the Bloomberg Barclays U.S. Aggregate Index, by 92%.

During the webcast, Gundlach said a combination of rising interest rates and growing government deficits have created a “dangerous cocktail” for Treasuries.

At writing, the Federal Reserve’s 10-year benchmark rate is 2.89%. Gundlach says that if it goes over 6%, bond investors will take a beating.

Before we get to how you can protect yourself from this ticking time bomb, let me give you a little background.

The Extermination Is Coming

As you can see in the chart below—despite pulling back a little over the past month—the rate on the 10-year Treasury yield is in an uptrend. 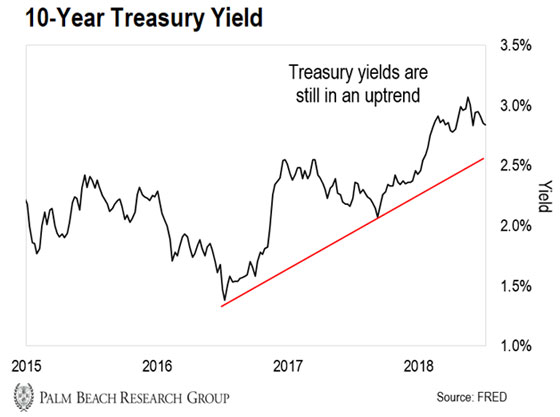 Holders of 10-year Treasuries have gotten smoked. Over that span, the iShares Barclay’s 7-10 Year Treasury Bond ETF (IEF) is down 10.2%.

Keep in mind… the 10-year yield is the “risk-free” rate. That’s because U.S. bonds are supposed to be the safest securities in the world.

The rout could just be getting started, too.

If yields rise to 6% as Gundlach predicts, these “safe” securities will tumble another 23%.

PBRG guru Teeka Tiwari calls this Income Extermination. That’s when rising interest rates crush the bond market. It’s something he’s been warning you about for months…

Income Investors Have Been Warned

Most investors buy bonds to generate income from interest payments. For instance, retirees use the payments for everyday expenses.

But now’s the time to start protecting yourself from Income Extermination. There are two steps you should take immediately.

One way to combat rising interest rates is to buy short-term bonds. (See the May 14 Daily, “Why I Decided to Lend the U.S. Government Money.”)

You won’t generate a lot of income from short-term bonds—the four-week Treasury note currently yields 1.9%. That means you’ll make $1,900 on every $100,000 you invest.

But that’s still 24 times more than what you’d get by putting your money in a bank savings account, which yields about 0.08% on average, according to the Federal Deposit Insurance Corporation (FDIC). And it’s much better than losing money by holding long-term bonds.

CEFs are an investment structure with shares traded on the open market. They’re similar to exchange-traded funds (ETFs). But there’s one main difference: CEFs do not issue shares daily. That means CEFs can trade on the market at prices different than the value of their assets, called the net asset value (NAV).

When a CEF trades for less than its NAV, you can buy it at a discount. This means you could buy, for example, $1 worth of assets for 90 cents.

If you want to avoid the threat of Income Extermination, remove the “dangerous cocktail” of long-term bonds from your portfolio… and add safer options like short-term bonds or quality CEFs.

P.S. Teeka has seven CEFs in the Palm Beach Letter portfolio that yield between 5.2% and 10.2%. They’ll help provide the income you need while protecting the value of your nest egg.

In today’s mailbag, feedback for Teeka and Glenn’s exclusive crypto event continues to pour in…

From Bill Z.: I attended the remarkable online presentation provided by Teeka Tiwari and Glenn Beck; what a timely opportunity they provided, both insightful and very well researched. Good show, gents! As such, I will try to find a means by which to join this opportunity in 2018, as I believe it will be not only asymmetrically advantageous, but enjoyable as well.

From Rick A.: Great show! I believe the opportunity is as great as described.

From Greg L.: Thanks for a very informative webinar with Teeka and Glenn last night, which I watched from 2 a.m. to 4 a.m. in South Africa. I am looking at entering the crypto market for the very first time and this helped reignite my intent to do so. After initially looking at the markets seriously from December 2017, at which point all cryptocurrencies seemed to take a serious nosedive, I am glad I didn’t rush in at that point in time.

Once again, thanks for a great event and I look forward to joining your client base in the near future.

If you missed out on last week’s historic event, don’t worry. It’s not too late to take advantage of Teeka’s special offer: two full years of Palm Beach Confidential at a fraction of the normal cost.

To learn how you can best position yourself for the next crypto bull run, watch Teeka’s brand-new video presentation right here. But act fast—it won’t be online much longer…

America is on the verge of a breakdown.

We’ve had unrest in this country many times before… but this is different. Your wealth, freedom, and even your safety may all be at risk.

You don’t have to be a victim. Read on here to learn how to protect yourself, and thrive, in what’s to come. 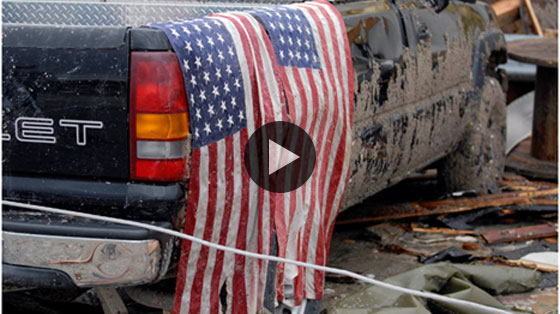