As usual, Trump took to Twitter to defend himself. He warned Democrats that the markets would tank if he’s impeached:

And he has a point—at least, so far.

No matter what you think of Trump, Wall Street doesn’t like political uncertainty. And it’s showing up in the CBOE Volatility Index (VIX)—the market’s so-called “fear gauge.”

Soon after Pelosi’s announcement, the VIX spiked from just below 15.9 to over 18.5 in just a few days—a major move for the index… 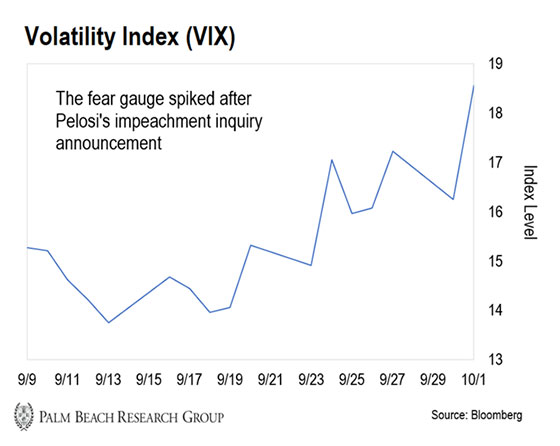 Part of the spike came on Tuesday, after the Institute for Supply Management released a report showing U.S. manufacturing activity has slumped to its lowest level since June 2009.

When rare events and bad economic news combine like this, markets transition into “safety mode.” But if you’ve followed the big money as long as I have, you know where it’ll likely hide out during these uncertain times.

You see, I designed my own system to track what big institutions are buying and selling. And today, I’ll share where the big money is hiding out now, and more importantly, where it’s headed next…

Where the Big Money Is Hiding

But I walked away from it all and used my experience to develop my own “unbeatable” stock-picking system. I spent half a dozen years and hundreds of thousands of dollars to make sure it’s highly accurate, comprehensive, and effective.

But it doesn’t just pick stocks. It can spot macro trends as well…

It not only predicted the sell-off in February 2018 and the rally we saw at the start of this year… but even President Trump’s epic political upset in the 2016 election, too.

Following the political drama last week, we saw plenty of red in the growth-heavy tech sector. And 82% of the sell signals were software names.

On the flip side, big buying is ticking up in utilities. Investors generally view the sector as defensive because it offers stability and strong yields. 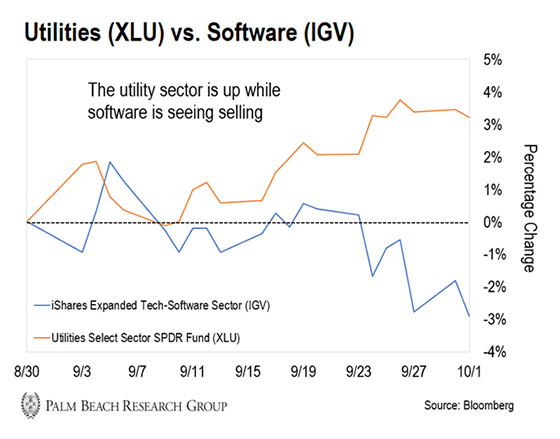 As you can see in the chart above, investors are fleeing growth in tech for safety in utilities.

But I didn’t build my system only to tell you where big institutions are piling in now. I designed it to help you profit from where they’re headed next…

Right now, the big money is merely throwing out the babies with the bathwater over volatility.

You see, there are 267 software-specific companies in the tech industry. And I did some digging to see how they’re doing. Overall, the subsector is crushing it:

So I expect the big money to return to software names and tech in general in the coming weeks and months. Here’s why…

Big institutions account for 70% of daily trading volume. And they can’t charge fees just to sit in cash. They have to put money into stocks.

So once this volatility passes, they’ll rotate into the tech sector again. It’s just performing too well. And with prices pulling back, there are some good deals on high-quality stocks.

Remember, despite the impeachment talks and economic fears, U.S. equities are the most attractive destination for investor capital.

Europe is as messy as UK Prime Minister Boris Johnson’s hair… Latin America is as volatile as Trump’s tweets… And China’s growth is contracting.

Plus, with falling interest rates, U.S. equities have better after-tax returns than other securities, like “safe-haven” bonds.

So don’t worry about any short-term choppiness. Volatility rains on all stocks—good and bad.

That’s why we want to own the best of the best.

P.S. Last night, I showed thousands of people how my system can make them more money—with more certainty—than almost any other investment you may have tried in your life.

It’s the same system that pinpointed the No. 1 stock on the S&P 500 almost every year for the past three decades (including the past six years in a row). If you’d invested $10,000 in each of those six stocks, you could be sitting on $163,031 today.

And to prove that it works in real-time, I used it to identify the No. 1 stocks in the five hottest market sectors today (cannabis, crypto, tech, gold and 5G)—live on camera.

Sound too good to be true? See it for yourself right here…