Just look at this scary headline from Cointelegraph on November 14, 2017: 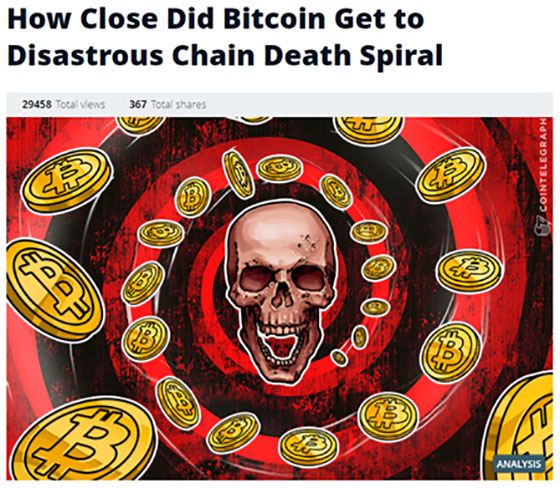 If you were in crypto around that time, you probably thought bitcoin was going down the drain. But a month later, bitcoin was at $20,000.

Friends, this is the madness of the crypto market. If you’re new here, welcome! This asset will go up 30–40% on no news… and drop 30–40% on no news, too. You’ll also see people panic on price drops, just like they are now.

So today, I’ll tell you what’s behind this recent drop—and more importantly, why it has absolutely no bearing on the long-term trajectory of prices…

Since September 2019, we’ve seen bitcoin drop from over $10,000 to under $8,000—a more than 20% decline. A confluence of events has dented investor sentiment, which has led to lower prices.

So what’s got everyone so fearful? Well, let’s start with the hash rate…

It measures the number of “mining” resources dedicated to the bitcoin network. Last week, it dropped 31% over a 24-hour period.

But guess what? Back when the death spiral headline appeared, bitcoin’s hash rate dropped 36% in a 24-hour period, too.

For reasons too technical to get into, the way the hash rate is measured can result in massive swings over short periods. However, it’s far less volatile when smoothed out over time.

Just remember this: Four weeks after the hash rate dropped 36% back in 2017, bitcoin ran up to a new all-time high. So hash rates don’t predict future prices. But that won’t stop media outlets from jumping on the “death of bitcoin” bandwagon.

Another thing folks are worrying about is the lack of volume on Bakkt, a subsidiary of the company that owns the New York Stock Exchange.

Bakkt is a bitcoin trading platform for institutional investors. What makes it special is that it’s physically settling futures contracts with bitcoin rather than with cash. That’s never happened before. And it’s incredibly bullish.

As volumes ramp up on Bakkt, it’ll remove bitcoin from the marketplace (and hold it in custody). That makes remaining bitcoin more valuable.

The exchange launched on September 23. Since then, people have asked me, “Well, why isn’t it running billions of dollars in trades now?”

Look, it takes time for institutional money to start flowing into a new asset. But as I’ve said before, we’re already seeing some of the smartest money on the planet making big bets that crypto is here to stay.

These reasons aren’t legitimate long-term hurdles, but they’ve caused some damage to bitcoin’s price. So we’ll see some weakness over the short term. Don’t be shocked if bitcoin temporarily drops to the $7,000–7,500 level.

Don’t Let This Volatility Get to You

Look, we’ve seen this all before. Bitcoin has been declared “dead” at least 377 times since its creation. Yet despite the naysayers, Wall Street is still headed into this asset class.

Let me be clear: Over the short term, crypto prices will come down because bitcoin broke key support levels.

So remember, volatility cuts both ways. That’s why we want to be in this market. It gives us the chance to take small stakes and magnify them dramatically.

If you’re freaking out, it means you might’ve put a bit too much into some of your positions.

Finally, take a long breath and just relax. (I just found out recently that it’s more calming to have longer exhales than inhales.) Otherwise, you’ll just drive yourself bonkers.

Don’t get too caught up in day-to-day moves. Let time do the heavy lifting. And when you see these crazy headlines, just laugh at them.

After the market starts running and gunning again, there’ll be a whole new slate of them. But instead of showing skulls, they’ll show happy faces.

P.S. Despite its recent pullback, bitcoin is still up 127% in 2019, making it one of the world’s best-performing asset classes. And the sell-off in the overall market is giving us attractive entry prices on some of the best crypto projects out there.

So now’s the time to get in, especially with a rare event coming around the corner that will push bitcoin to new highs. It’s called the “halving” and it’ll cause the entire market to explode in value.

To take advantage of this event, I’ve found five tiny cryptos (some trading for as little as a few cents) that could soar so high, so rapidly… they could potentially help you turn $500 into $5 million in as little as 300 days. It’s exactly what could’ve happened the last time bitcoin’s halving occurred four years ago.