Many people think Saudi Arabia has the world’s largest reserves (kudos if you’re not one of them).

It has the third largest.

The leader is the United States (Venezuela comes in second). Yes, Americans have more oil reserves than anyone else on the planet.

It may come as a surprise to you. But if you want proof, take a look at the chart below. It shows the amount of oil reserves by country. 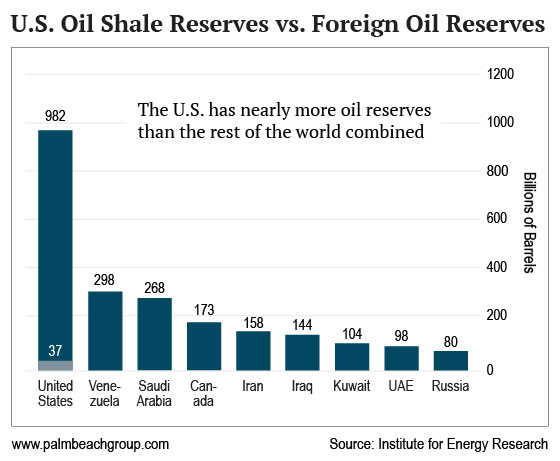 As you can see, U.S. reserves far exceed those of every other major oil producer. In fact, the United States has nearly more oil reserves than the rest of the world combined. (The vast majority is in shale; the tiny sliver of 37 billion barrels is U.S. crude oil reserves.)

In yesterday’s Daily, I told you oil prices are on the rise. And that’s bullish for oil producers.

One way to play this trend is with traditional oil companies like ExxonMobil.

But today, I’m going to show you another way to play higher oil prices. It involves a type of U.S. oil driller that quietly controls over half of the world’s oil supply.

As I mentioned above, the U.S. has the largest oil reserves in the world. But there’s a catch… Most of those reserves are shale oil locked in rocks deep beneath the earth’s surface.

Shale oil comes from shale rock fragments. It’s different than the crude oil most people are familiar with.

Fracking uses high-pressured water to fracture (or frack) shale rocks deep in the earth. The process releases the oil embedded in the rocks.

The process is much more expensive than drilling for crude oil. But when oil prices rise, fracking becomes very profitable.

Over the past two or three years, fracking outfits have struggled. That’s because oil prices have been too low for them to make a profit.

But with oil prices on the rise, shale production is profitable for just about everyone.

For most shale oil wells to be profitable, the price of oil needs to be about $50 per barrel. Today, the price is around $60.

If oil prices stay above $50, fracking will be profitable. That’s why we’re seeing an increase in shale oil drilling. As you can see below, U.S. shale oil production is at all-time highs. 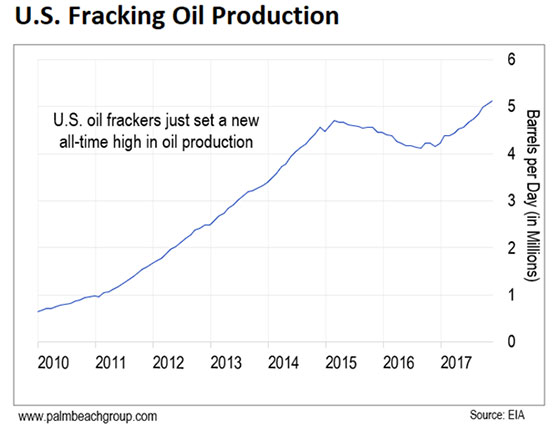 Although the U.S. has the largest oil reserves in the world, it’s still cheaper to produce oil in countries like Saudi Arabia and Kuwait.

In the Middle East, they can just poke a stick in the ground and suck up oil through it. Fracking is much more expensive.

If oil goes back to being cheap again, shale oil won’t be profitable… And shale oil companies will shut down their wells.

But as I told you yesterday, Saudi Arabia wants oil prices to go higher. The country plans to launch an initial public offering (IPO) for its crown jewel, Saudi Aramco. And higher oil prices will make the company more attractive to investors.

I believe this will create a floor in oil prices and keep them higher for at least another year.

And when you understand that, you’ll see great profits are ahead for the shale oil industry.

Frackers will drill as fast as possible to take advantage of high prices. This will allow them to pump out an insane amount of profits… which will be great for shareholders of these companies.

If you’re looking to take advantage of this trend, the easiest way to gain exposure to fracking companies is with the VanEck Vectors Unconventional Oil & Gas ETF (FRAK). It holds a basket of fracking companies.

The recent market pullback has pushed FRAK down over 20%. That’s good news, though. It means you can get in at a cheaper price.

To understand why, look at today’s chart. You can see that gold’s been trading sideways since 2013. That’s an extremely long consolidation period.

In that time, gold’s been getting ready for its next move. Now, that move could be to the downside or the upside. Only time will tell… But all signs point to gold ripping higher.

After all, gold’s up 9% since the start of 2017. It’s now bumping against major resistance at around $1,350. If it breaks above that, gold could be off to the races. 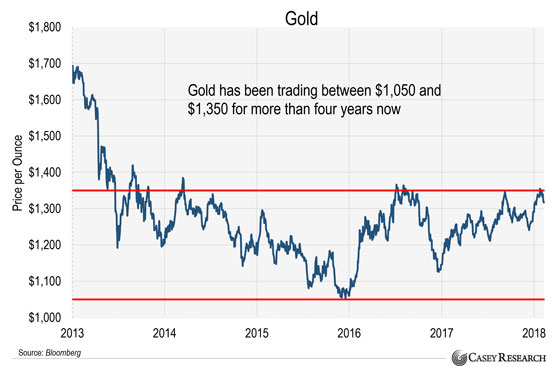 This is a massive opportunity for speculators. And that’s because a big move by gold could trigger a “rip your face off” rally in gold stocks.

So, consider speculating on gold stocks. Also, remember that mining stocks are speculative, so treat them as such.

Nick’s Note:  Owning gold and speculating on gold stocks are also great ways to prepare and profit from a market crash. But they’re not the only ways…

Next week, we’ll be publishing a special evening series in the Daily with more strategies on how to protect yourself during a crash. Stay tuned.

From Derrin B.: Could you organize a feedback system for emails so we know whether they were received, read, or even welcomed? I don’t know if you think what we send you is valuable intel or just eye-rolling boring.

Nick’s Reply: Rest assured, Derrin. We read all customer feedback. If you want to write to us, send us your thoughts right here… (You may even see them printed in the next Daily.)

This rare technique generates thousands per week without touching stocks, bonds, or cryptos. The most surprising part? It’s very, very easy to do. See why some are calling this the “most effective money-making technique” they’ve ever seen.

Get all the details right here… 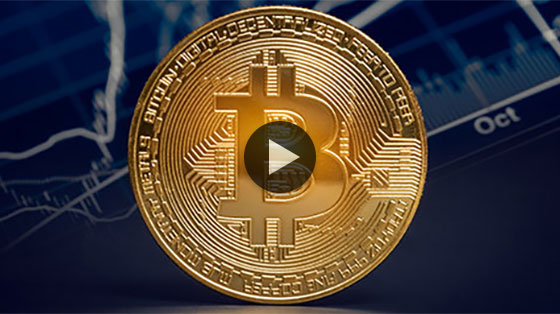