Eric is a good friend of Casey Research… The Oxford Club’s Macro Strategist… and one of the best traders in the country.

In fact, he won last year’s Portfolios with Purpose contest.

This stock-picking competition pits some of the world’s best investors against one another. The investor with the highest return over 12 months receives a cash prize that they can donate to the charity of their choice.

Last year, Eric’s portfolio returned 150%. That was far better than anyone else in his category. It was also enough to beat the likes of David Einhorn, Kyle Bass, and Mark Yusko.

These are billionaires and some of the most successful investors on the planet. And Eric crushed them all.

Here’s a picture of him collecting his prize money, which was donated to the Roberto Clemente Health Clinic in Nicaragua. 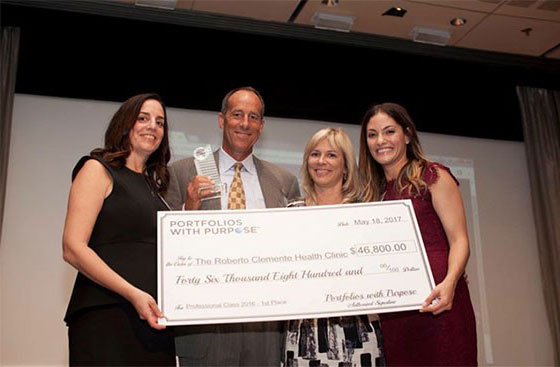 Eric poses with his prize winnings

So I couldn’t wait to hear him speak at the Sprott Natural Resource Symposium in Vancouver.

When his time came, he didn’t disappoint.

His speech was educational and entertaining. Best of all, he revealed one of the biggest investing opportunities of the next decade.

Most investors know about this megatrend. But few are playing it right.

They’re buying “junk” instead of the right “stuff.”

I’ll explain what Eric means by this in a second. I’ll also tell you about the red-hot stock Eric says you should sell right now… and the beaten-down stock he says you should buy.

But you should first understand why I’m in Vancouver.

I turned in my house key. And I hit the road.

I did this for a couple of reasons.

First, because traveling helps you understand the world better. And second, because I want to discover (and share with you) opportunities that I’ll never find sitting at a desk in Florida.

I came here to learn more about the booming legal marijuana market, Canada’s property market, and, of course, the natural resource markets.

And there’s no better place to do this than at the Sprott Natural Resource Symposium. Every year, it attracts some of the world’s top investors and brightest mining executives.

Over the last few days, I’ve had the pleasure to hear brilliant presentations from people like David Stockman, Ross Beaty, and Steve Sjuggerud.

That’s because he discussed a trend that should be on every investor’s radar.

Electric vehicles don’t have an internal combustion engine. They run on electricity instead of gasoline.

A decade ago, this market barely existed. There were just a few hundred electric cars in the world.

Today, there are more than 750,000 electric vehicles. That’s 538% more than there were just five years ago.

That’s a staggering growth rate. But don’t worry if you missed out on the first wave of this boom.

Not only that, research firm Sanford C. Bernstein projects almost all new cars made in 2035 will be electric.

This is why so many people have invested in Tesla (TSLA), the world’s largest electric car maker.

Just look at this chart below. Tesla’s up 87% since last November. 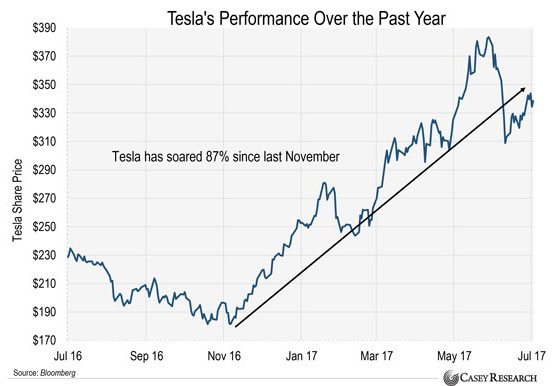 Tesla may seem like the obvious way to play the electric car revolution. But don’t be fooled.

After all, Tesla pioneered the electric car market. It’s run by Elon Musk, a true genius. And its stock is soaring.

But that’s just window dressing. When you peel back the curtain, Tesla is a deeply troubled company.

It loses money on every car it sells. It’s drowning in debt. And its valuation is totally irrational.

At this point, there’s no way the company can live up to its lofty valuation.

In other words, investors aren’t buying a great company in Tesla. They’re buying hopes and dreams.

It’s also why he told investors at the Sprott conference to sell Tesla.

The good news is that Eric has an even better way to profit off the electric car revolution: buy Glencore.

Glencore is one of the world’s biggest mining companies.

It produces and trades more than 90 commodities. And it has active operations in Africa, Asia, Australia, North America, South America, and throughout Europe.

Now, you might be wondering what a miner could possibly have to do with electric cars.

Simple. It sells the “stuff” Tesla and other car companies need to make electric cars.

You see, electric cars require far more copper, cobalt, and zinc than traditional cars. And that demand is only going to keep soaring.

In fact, Eric explained that annual copper supply will have to double by 2035 if most new cars are electric by then.

This would require the industry to bring a mine the size of Chile’s Escondida into production every year from now. Escondida is the biggest copper deposit ever discovered.

Eric told the investors at the Sprott conference, point blank, that this isn’t going to happen.

That means that the price of copper must rise.

This is clearly good news for Glencore, one of the world’s biggest copper miners.

But that’s not the only thing Eric likes about the company.

It makes billions of dollars.

It’s also not trading at record highs like Tesla. Instead, it’s trading at a 49% discount to its former high.

This is a massive opportunity.

And yet most investors won’t take advantage of it. They think you can only profit off the electric car boom by owning Tesla or another carmaker.

But the real opportunity is in beaten-down miners like Glencore.

I encourage you to sell Tesla and buy Glencore like Eric recommends.

This simple trade could hand you triple-digit gains in the years ahead while saving you from huge losses.

Several key industrial commodities are already starting to take off.

These are huge moves for such short periods. They tell us that the next great commodity bull market has likely begun.

So be sure to put this trade on soon, if you’re interested.

I also encourage you to check out Eric’s advisory Fry’s Pinnacle Portfolio. As you’ll see, Glencore isn’t the only stock poised to deliver enormous gains in the months ahead.

It’s all part of Eric’s powerful strategy that’s helped outperform Wall Street’s living legends. And for the first time ever, he has agreed to share his secret, one-of-a-kind system with you.

And he’s guaranteeing that anyone who follows his strategy will have the chance to earn 10 times the market’s return over the next 12 months.