As I walked out of my hotel room and onto the sidewalks, the smell hit me like a punch to the face…

I’d flown into Los Angeles late the night before on a scouting mission. It’s part of the massive project Palm Beach Daily editor Teeka Tiwari and I have been working on for months now.

And it didn’t take long for my recon to bear fruit. But first, let me back up a bit…

As Big T mentioned on Monday, we’ve been hard at work diving deep into the legal cannabis space.

From Colombian mountain peaks to Canadian skyscrapers, our fact-finding missions became adventures in their own right.

But there’s one thing we knew from the outset: We had to get to California—pronto.

You see, the Golden State passed the Adult Use of Marijuana Act in 2016, legalizing recreational cannabis in the state.

And as the largest state by population (39.6 million residents), we wanted to see the action on the ground firsthand. So Big T sent me from my perch in Atlanta all the way to Los Angeles.

Over 2,000 miles and a few cups of coffee later, I was ready to explore the city’s cannabis profile—and meet with a handful of promising legal cannabis firms.

And that’s when the overwhelming smell of cannabis hit me…

The smell was ever-present while I spent most of my first day walking around the city.

Now, although it’s still “unlawful” to use cannabis in public places in California, people smoked freely on sidewalks and benches. The cops simply ignored them.

Even as recently as five years ago, the LAPD would’ve cuffed anyone smoking pot. And they’d face serious charges.

So you can see just how far along cannabis has come in a short period—from social pariah to near-acceptance. 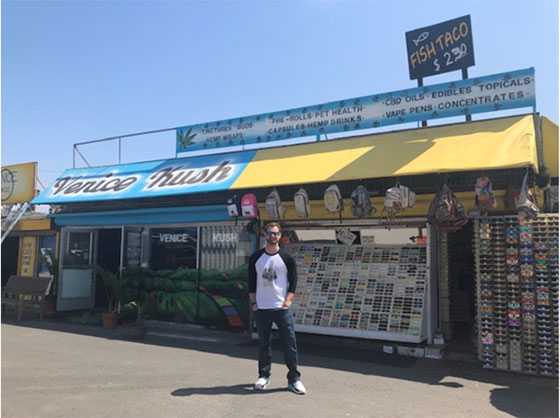 One of the cannabis stores I visited in California

But our game isn’t the recreational marijuana market. After all, marijuana is still illegal at the federal level.

Instead, we’re focusing on the legal cannabis market. (And in a moment, I’ll tell you the four traits we look for before investing in cannabis companies.)

The Promise of Profits

Instead, hemp contains cannabidiol, or CBD. Clinical studies show CBD has many medical benefits, including treating childhood epilepsy and reducing pain and inflammation. But it does it all without making you feel stoned.

In fact, Brightfield Group even forecasts CBD sales to explode from $591 million in 2019 to $22 billion in just three years.

So the focus of my California trip was on the exploding CBD market—not the recreational pot market.

But it’s not all sunshine and rainbows…

You see, with any new, rapidly growing industry, there are investment risks. These range from bad actors launching companies and taking investors’ money… to simple inexperience causing companies to flame out and fail.

So we developed our own proprietary screening model to single out the best-in-breed firms. And we’ve used it to analyze hundreds of companies over the past few months…

Four Traits to Look For

There are hundreds—and counting—of cannabis companies in the market today. So it’s important to separate the wheat from the chaff…

To do so, we look for four traits: our “POTS” system. If you’re considering investing in this space, you’ll want to write them down…

You can use this POTS system to screen any of the 400-plus legal cannabis companies that come across your radar.

P.S. Like I said, there are many companies in the legal cannabis space. And Teeka and I have found a way to make life-changing gains by getting in on the ground floor of this lucrative market.

Now, we can’t reveal too much about it since it’s a limited venture. (In fact, that’s why I was in California.) You see, it’s a “sweetheart deal” in a market previously reserved for the wealthy. But we’ve uncovered a loophole allowing ordinary investors access.

And you can get all the details by attending Teeka’s free Pocket Change Millionaire Summit. It airs at 8 p.m. ET on Wednesday, June 26. You can automatically sign up by clicking here.

As a bonus, Teeka will share details about five small-cap stocks for 2019–2020 that made it through our other proprietary filtering system. Just click here to reserve your spot.