On May 9, California became the first state to require new homes to install solar panels.

The California Energy Commission passed the regulation as part of the state’s 2019 update of energy efficiency standards. The mandate will start on January 1, 2020.

It will apply to most single-family homes as well as multi-family residential buildings up to three stories… including condos and apartment complexes.

At the Daily, we don’t like the government telling us what to do or buy. So we’re not fans of this legislation.

But you’re not reading this to hear our political views… You’re reading it to make money. And the U.S. solar industry is about to make a lot of money for investors.

Timing Is Right for Solar

Regular readers know that we like the solar industry. In October 2017, we told you solar was the fastest-growing energy source in the United States.

We also said that solar is getting cheaper every year, and we’re currently seeing that play out.

According to financial research firm Lazard, the cost of generating electricity from solar continues to decline. In fact, it now costs about the same (in terms of megawatts per hour) to run a solar power plant as it does to run a coal power plant.

I also said that analysts expect the solar industry to grow over 12% per year. But with California’s new solar mandate, we could see that number increase.

If all those new homes add panels, that would be about a 430% increase. (SunPower Corporation… estimates the new law will increase California’s solar market, both residential and commercial, by at least 50% in 2020.)

How to Take Advantage of Solar’s Rise

If you want to gain some exposure to this trend, consider the Guggenheim Solar ETF (TAN). TAN holds a broad basket of solar companies. 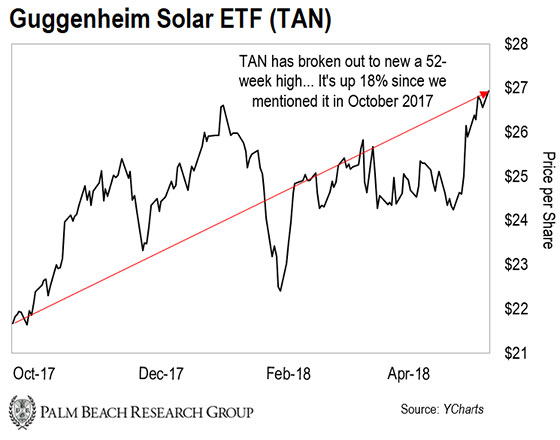 As you can see in the chart, TAN recently broke out to a new 52-week high. To market technicians, this is bullish price action.

I feel confident that we’ll continue to see higher prices. Analysts are just starting to factor in additional growth… and increase their price targets for these companies.

It’s not too late to add some solar exposure to your portfolio.

P.S. As I said earlier, we’re not fans of this mandate. We think it’ll create massive distortions in the electricity market… But there is an investment that will capitalize off this distortion. Tomorrow, I’ll show you how to play it.

On March 27, when investors were panicking about the market sell-off, I told you to buy the “market leaders.”

These are companies that dominate their industries. I told you their shares would hold up well during the downturn.

One market leader I recommended was SolarEdge (SEDG). It makes power converters for solar panels.

As you can see, if you bought SEDG on March 27, you’d have made a 24% gain over the past two months. 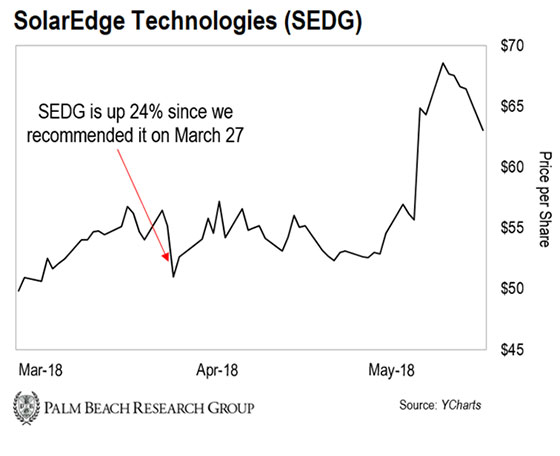 SEDG is a speculative play on the solar energy trend. Remember, don’t bet the farm on any one company. And always know when you’re going to exit a position.

See this field below?

Some are calling it Silicon Valley’s “Field of Fortune.” That’s because it holds a revolutionary plant that cranks out a record-breaking $1.1 million per acre. 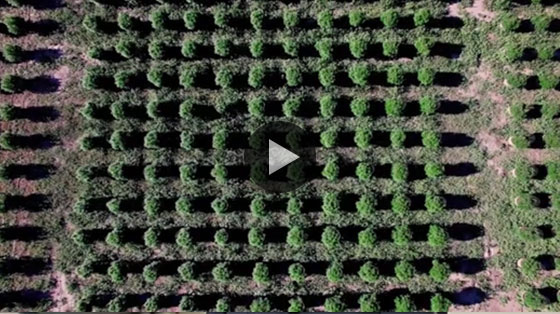