In April 2019, crypto market sentiment was still in a pit of despair…

Bitcoin had dropped more than 65% from its all-time high the previous year, while the overall crypto market was down about 70%. It was a bloodbath.

Skeptics were out in droves predicting the death of all things crypto… but here at PBRG, we saw signs of life. After 15 months of lower lows, bitcoin was trying to break out of its downtrend. And what started getting us bullish again was a stream of good news…

Major financial firms like Fidelity were setting up crypto services. And Facebook and JPMorgan Chase had announced plans to launch their own internal digital tokens.

The biggest players on Wall Street and Silicon Valley were coming into crypto, and this meant higher prices. It was simple math. But what really got us bullish was how the entire market was ignoring the good news.

Whenever the market ignores good news about a beat-up asset class, it’s a sure sign prices are set for takeoff. It’s only a matter of time before investor perception catches up with reality – and sends asset prices higher.

That’s why on April 3, 2019, Daily editor Teeka Tiwari issued an update to subscribers of his elite Palm Beach Confidential crypto service. Big T told them it was the time to double down on some of our open crypto positions.

And more recently, we saw PayPal announce plans to allow bitcoin funding across its platform. The payments giant operates in 202 markets and has over 346 million active users… an exponential increase in bitcoin’s reach.

The king of crypto popped roughly 8% in the days after the announcement − reaching an annual high of $13,000.

The point is, we’ve seen bitcoin pronounced “dead” before, only to see it come back stronger… a clear sign that the underlying market for bitcoin is getting larger and larger.

Now, crypto isn’t the only market where positive news and market sentiment diverge…

Like crypto, legal cannabis is wildly volatile. And also like crypto, it has many tailwinds that will drive prices higher in the coming months and years.

A Megatrend Is Forming

Regulatory uncertainty has always plagued the cannabis space. But that’s also created the opportunity in front of us. And we’ve seen an uptick in eased restrictions, deeper research, and more explicit guidelines.

Here’s what the map of cannabis legalization in the U.S. looks like now: 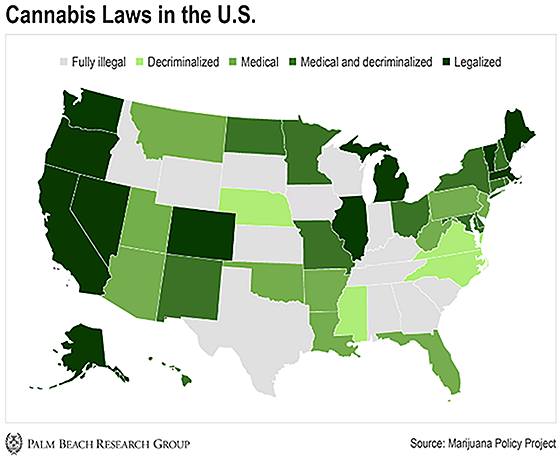 Colorado and Washington were the first states to legalize adult use in 2012. This meant the legal U.S. market started small, with just 12.1 million people. But today, roughly 300 million people have access to some form of legal cannabis.

Each month, more states and jurisdictions are opening their markets. And there’s a major catalyst and some important bullish developments that we need to bring to your attention.

And when a state legalizes cannabis, it creates pressure on neighboring states to do the same. Otherwise, they risk missing out on the tax revenue their neighbor will gobble up.

The most important thing is to keep your eyes on the bigger picture… separate fact from sentiment… and take advantage of the momentum building in the sector.

In tomorrow’s Palm Beach Daily, I’ll dive into what’s going on under the surface of this megatrend… And share an easy way to benefit from the torrent of good news and progress in legal cannabis.

P.S. For more than a year, Teeka and I have traveled the globe looking for early-stage opportunities in the legal cannabis space… And right now, we see three that could position you in the coming cannabis megatrend before the market catches on.