If you can’t beat them, you might as well join them (at least for now)…

At the Daily, we’re no friends of central bankers.

Regular readers know we’ve been leading the charge against the War on Cash. And we’ve been arch opponents of their negative interest rate schemes.

But we’re fans of helping you make money… even if it means going into enemy territory.

In our ceaseless monitoring of central banks’ policies, we’ve noticed a seven-year trend they’ve tried to keep quiet from the public.

For those who follow this trend, there’s potentially a money-making opportunity…

What Central Bankers Are Trying to Hide

For the past seven years, central banks have silently been net buyers of gold. And it’s a trend I expect to continue.

There are three reasons why I think this will happen:

I’ll go over all three…

One of a central bank’s primary jobs is to set national interest rates.

As we’ve noted in the past, central banks have been lowering interest rates to record lows in a misguided effort to spur economic activity.

In some countries, like Japan and Switzerland, rates have even gone negative. Today, there’s $9.6 trillion worth of global bonds with negative rates.

In the past, they could invest in bonds and make a return. Today, because of negative interest rates, they have to pay just to get their money back.

You don’t earn interest on gold holdings. But you don’t have to pay negative rates on them, either. So that makes it less costly for central bankers to hold gold.

Reason No. 2: Diversification of Assets

The second reason central banks will continue to buy gold is diversification.

Central banks print new money to buy securities. (The Bank of Japan is a notorious example. It’s not only buying up government bonds… but stocks and real estate, too.)

Their buying sprees inflate asset prices. But, eventually, they’ll have to sell their assets. The concern is that when they do, asset prices will fall.

So central banks are turning to gold to diversify their portfolios.

According to the World Gold Council, a change in the prices of other financial assets do not correlate with a change in gold prices.

In other words, if stocks or bonds go down, gold will not. That acts as a hedge in a central bank’s portfolios.

Reason No. 3: Hedge Against the U.S. Dollar

The U.S. dollar currently makes up 64% of global currency reserves.

As my colleague Nick Rokke wrote last week, gold is inversely correlated to the U.S. dollar. If the dollar is strong, gold is weak, and vice versa.

That makes gold an effective hedge against a weakening dollar.

This Trend Will Be Long-Lasting

The three policies I mentioned above have spurred central banks to go on a gold-buying spree over the past seven years.

Just take a look at the chart below. 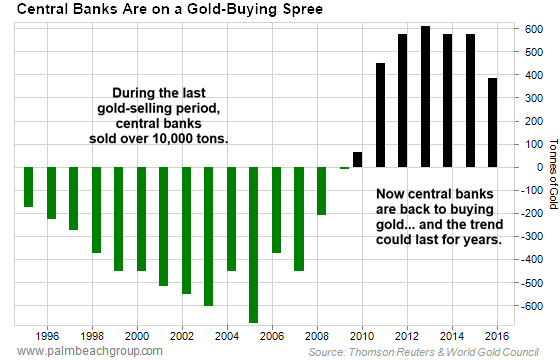 I expect this trend to continue…

In the fourth quarter of 2016, the World Gold Council surveyed the world’s central banks about their gold holdings.

The survey found that 56% of central banks intend to increase their gold reserves over the next three years… while 11% plan to maintain current reserve levels.

The survey is strong evidence that central banks believe the global demand for gold will strengthen. And that will drive up prices.

The last time official gold holdings peaked was in 1965.

Today, world foreign currency reserves are about $11 trillion. Currently, 12% of those reserves are backed by gold.

If central banks tried to reach the 65% level again, they would need to add 140,000 tonnes of gold to their reserves.

That’s a lot of gold… nearly 75% of the above-ground gold stock.

Frankly, I don’t think central banks could get their hands on that much gold.

Instead, I believe the percentage of reserves backed by gold will rise another way: through higher gold prices.

Either way, I see higher gold prices in the future.

That’s why, like the central banks, you should add some gold to your portfolio.

If you’re considering getting in on this gold trend, you can look into a gold exchange-traded fund or buy gold bullion.

Palm Beach Letter subscribers can read our No. 1 way to own gold right here.

One way to really leverage this gold trend is through gold penny stocks. Recently, legendary gold speculator Doug Casey put $1 million into them.

Doug’s made 86,900% using his “Casey Method” for investing in gold penny stocks. And you could make five times your money this year using the same method… 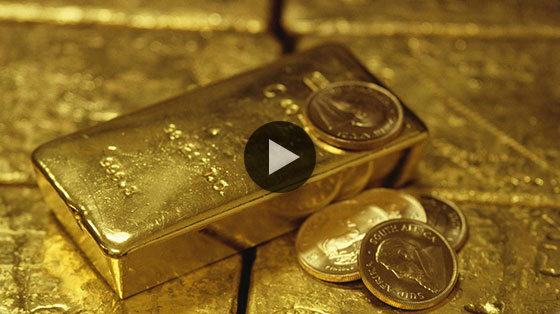