It’s the law of uninterrupted compounding.

Compounding is a simple investment strategy in which you put your money in an investment that pays interest. At the end of the year, you take the interest you earned and reinvest it with your original stake.

Now, your interest earns a return, as well.

The next year, you’ll get a bigger interest payment. Then, you’ll reinvest that payment, and so on…

It’s a key lesson I learned from my friend and PBRG co-founder Tom Dyson.

If you’re not familiar with Tom, he was co-editor for The Palm Beach Letter along with PBRG guru Teeka Tiwari. Like Teeka, Tom doesn’t shy away from bold, off-the-grid ideas he believes can build your wealth.

(I consider Teeka and Tom two of the top investing minds in our industry. Yet, you’ll seldom find these titans on tape together. So I dug up a couple of rare conversations between them out of the PBRG archives to share with you. Click here to watch them.)

Tom once told me a snowball is the best analogy for compounding:

As you roll the ball through the snow, the surface area gets bigger. The more surface area on the snowball, the more snow it picks up. The snowball gains mass slowly at first… but pretty soon, you can’t move it because it’s so huge. Gradually, the interest you earn grows, and your reinvestments increase. And the longer you allow your money to compound uninterrupted, the more it grows.

Today, I’ll show you the power of compounding to build your wealth, and why it’s a mistake to interrupt it.

Tom taught me the key to compounding is to let it work over many years.

Just look at the chart below… It shows the value of an account growing at 10% per year over 60 years. We call this the “hockey stick” chart, because the money grows slowly for several decades, then really picks up speed after about 40 years. 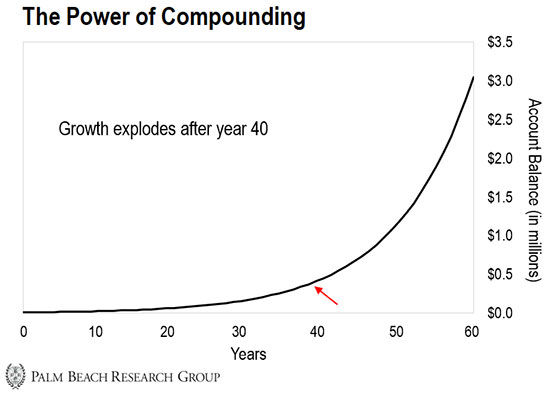 Now, the compounding process works only if you don’t interrupt it. That means you can’t pull money out of the account along the way.

The chart below shows what happens if you make an early withdrawal and pull $150,000 out of your account in year 40.

As you can see, first, the balance in your account drops. That’s the red line you see dipping below the black line.

Look what it does to your wealth…

As you can see, one small withdrawal causes your wealth to plummet. 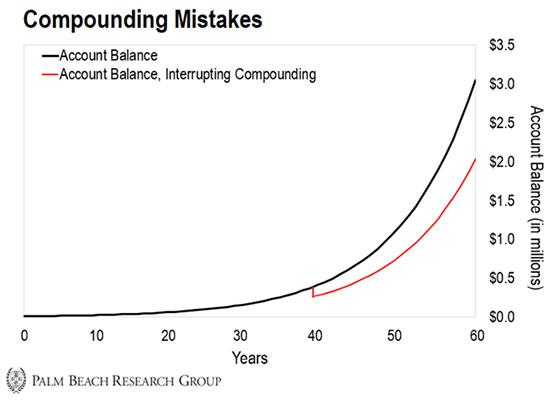 Thirty-, 40-, and 50-year periods are long. They’re hard for most people to fathom. But we use these time frames to illustrate one important point:

Tom says interrupting the compounding process – by liquidating part or all of your funds – is the single biggest destroyer of wealth.

As he points out, these interruptions are not always easy to spot:

For example, a 20% decline in the stock market interrupts the compounding process in your 401(k) account. That’s because your account balance dropped by 20%. And you have less money producing interest.

Or, you could cash out part of your 401(k) or IRA to buy a new car or house or to give a gift. That interrupts compounding as well.

Or, consider your child’s college fund. You start putting money into it when your child is born. It compounds and grows tax-free in a Coverdell account or 529 plan.

But when your child reaches college age, you liquidate the account to pay for tuition expenses. You’ve interrupted the compounding process after only 18 years.

Bottom line: To benefit from the snowball effect, don’t interrupt your compounding.

If you want to determine how much your money can grow using the power of compound interest, try the Investor.gov compound interest calculator. It’s a free tool you can use to plan your financial future. I suggest you bookmark it.

P.S. Now, leaving your money alone and letting it compound can produce great wealth. But there’s one downside to this: Interest rates are at historic lows.

But here’s the good news… He’s found a way for you to take back control of your own financial future – without putting your current financial position at risk.

It’s a system that can help you take $12,000 per month in extra cash off the table – often in only a few days. So you can take your original stake off the table… and simply roll your profits into each new investment, so you’re essentially playing with “house money.”

It’s a completely new way to compound. And Teeka has all the details right here…