The Fukushima Daiichi Nuclear Power Plant is on Japan’s northeast coastline. Japan is one of about 40 countries along the Ring of Fire.

The Ring of Fire is a major basin of the Pacific Ocean. It has numerous earthquakes and volcanic eruptions every year.

Like most nuclear reactors, Fukushima had safeguards to prevent a meltdown in case of an accident… Or a natural disaster like an earthquake.

A magnitude 9.1 earthquake shattered the Earth’s crust 45 miles off the shore of Japan. The quake triggered a tsunami with waves reaching heights of up to 133 feet.

The plant had sensors to detect tsunamis. The sensors worked… And the plant’s nuclear reactors automatically shut down as planned.

But the plant’s managers missed something… They didn’t expect a large tsunami would wipe out the emergency generators used to cool the reactors.

Three of the plant’s six emergency generators overheated. The meltdowns caused explosions that released radioactive material into the air.

It was the worst nuclear disaster since Chernobyl in 1986.

Here’s why we’re telling you about Fukushima: That crisis in 2011 presents a huge opportunity for us today…

How to Profit From “Overstretched” Markets

If you stretch a rubber band a little, the recoil will be gentle…

But if you stretch the band to its limit, the snap back to normal will be violent and quick (and possibly sting your hand).

Asset prices work similarly. The further prices are stretched from their norm, the more violent the return.

People generally see the rubber band effect in action when overpriced assets quickly snap back to their mean, losing lots of money for investors who bought at the top.

But there are times when underpriced assets snap back violently, too. And major gains can be had for investors who bought at or near the bottom.

One of the best times to find assets overstretched to the bottom is after a crisis. And today, we’re seeing an opportunity shaping up in the commodities space…

Prepare for a Snap Back in This Commodity

Uranium is one of the most stretched markets in the world.

We’ve crunched the numbers. And when you buy an industry after a 90% decline, on average you can expect to double your money over the next three years.

But the opportunity in uranium might be even bigger… Just take a look at the chart below. 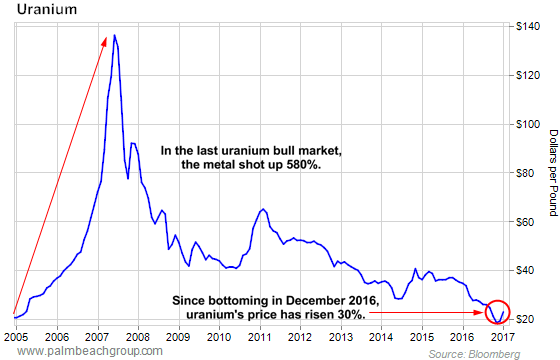 If this run-up is similar to the last bull market, uranium could go up another 444% from here.

One way to play this trend is via the Global X Uranium ETF (URA). Right now, URA is up about 40% from its December lows. That’s a large move. This ETF is now very volatile.

You could take a small position now just to gain some exposure, then if it pulls back a little you can increase the position.

If the uranium bull market is anything like the last one, we’ll see URA double… and then double again.