According to a report from Crypto.com, there were 221 million worldwide crypto users at the end of June… an increase of roughly 20 million people from the month before.

Here at the Daily, we’ve been writing about crypto mass adoption since 2017… and we’ve told our readers to ignore short-term “death of bitcoin” narratives and negative sentiment…

And we’ve reminded you that the best thing you can do right now is ignore any day-to-day volatility and view price dips as buying opportunities.

If you had just focused on headlines and the stories coming out of mainstream finance, you’d probably have no idea just how far crypto adoption has come… or how much room it can still grow from here.

That’s because headlines like “Bitcoin Is Inefficient and Wastes Energy,” or “China Bans Crypto,” aren’t as scary when you consider that the number of worldwide users has increased 240% to 221 million in about a year.

But it’s a song we’ve heard before, and one we’ll hear about whatever comes along after bitcoin and crypto are as common as credit cards or cash… that’s because people fear change.

And when that change is a technology that can disrupt established industries and economic systems… that fear grows even stronger.

To get some perspective, we can look at the adoption of the internet…

Back in 1995, the internet was just getting started… and its worldwide user base was less than 40 million.

Despite innovations like email and online chat, many saw the technology as a short-lived fad. Here’s a headline from Newsweek at the time… 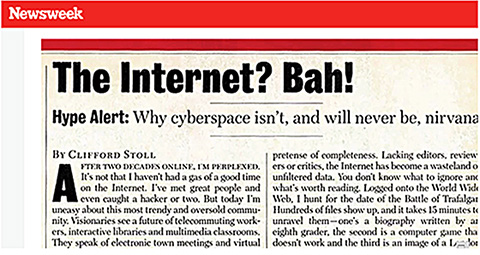 Nearly three decades later, most of us would be hard-pressed to go a day without any kind of online connectivity.

And not because we don’t want to… it’s just that engrained in our lives. Nearly everything we do requires an online connection.

Even much of the information we need to do simple in-person tasks like get a haircut or go to the bank requires some level of online connectivity.

Think about it… when was the last time you opened a physical phonebook to look up a phone number? Or opened a print newspaper to check things like sports scores or movie times?

In that nearly 30 years of technological progress and saturation, the internet’s user base has grown to about 5.2 billion worldwide users… and it took about four years to go from 40 million users in 1995 to 200 million by mid-1999.

Crypto made that same jump in users in a little over a year… and at its current pace, we could see as much as 1.4 billion total worldwide users in another 12-months’ time…

And that number assumes we don’t see the rate of growth continue to increase like we have over the last few months.

That’s hardly what I’d call “the death of crypto.”

There’s No Turning Back

Meanwhile, the groundwork is being laid for massive adoption.

There is no turning back.

Despite the slew of negative headlines and day-to-day price volatility, the number of worldwide crypto users is expanding faster than ever before…

And even faster than the peak growth of the internet.

Again, this crypto-adoption explosion is just the beginning… The current number of crypto users is only a fraction of the nearly 5.2 billion global internet users today.

We believe it’s only a matter of time before nearly everyone with a smartphone also has some form of crypto access or exposure… whether it’s owning crypto, a crypto app, an ETF, or crypto-related options at their local bank.

The crypto adoption floodgates are open… and it’s not too late to position yourself and ride the coming tsunami.

If you don’t yet own some crypto as part of your well-diversified portfolio, consider a small 1–2% position in bitcoin or Ethereum today.

After that, plan to hold for the long term, ignore any day-to-day volatility, and look at temporary dips in price as a buying opportunity.

Because just like the growth of the internet in the late 1990s… crypto adoption is taking off, and there’s no turning back from here.

P.S. As more investors are swept up in the crypto tsunami, even some of the smallest cryptos will see massive returns…

“Tech Royalties” are one way to capture those returns… and you’ll even earn more of the underlying crypto without spending more than your initial investment.

To learn more about how Tech Royalties can level up your portfolio… and earn “free” crypto while you profit… click here.