If you’re like me, you worry when your car’s check engine light turns red.

In my car, a yellow check engine light indicates a minor problem that can probably wait; I’ll have my mechanic look into it during the next scheduled tune-up.

But a red check engine light means I need to find a safe place to stop—and get towed to my mechanic immediately.

Well, the stock market has a similar “check engine light”…

And in today’s essay, I’ll tell you what color it’s flashing—and more importantly, what you should do about it…

After spending almost two decades on Wall Street, I created a proprietary system that scans nearly 5,500 stocks every day to look for those that institutions are likely buying.

It’s powered by 80 separate algorithms—and it even uses the same code Google operates on. Plus, it’s proven accurate over the years for pinpointing market tops and bottoms…

For instance, my system predicted the top in February 2018 and the bottom in December 2018.

But it can do more than just identify the best stocks the smart money is piling into. It also looks at the ratio of buying to selling in the market…

Now, without getting into all the details, when the ratio is above 80%, the market is overbought. And when it’s under 25%, the market’s oversold. 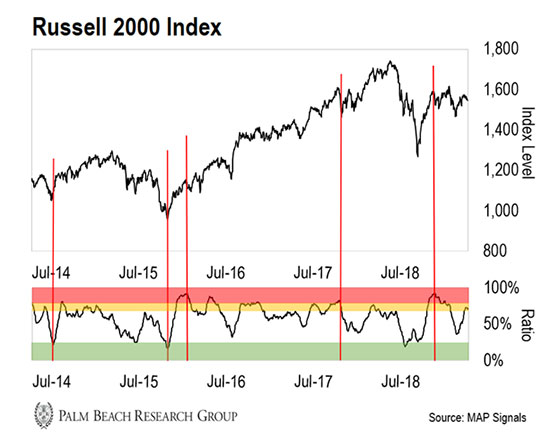 As you can see, when the ratio goes green (oversold), the market generally rallies shortly after. And when it goes red (overbought), the market usually pulls back.

Currently, the ratio is in the yellow range. That means the market is overheating, but hasn’t reached overbought levels yet.

My system’s ratio is saying it’s time to be vigilant. So we need to have a short-term game plan ready in case the market enters overbought territory and pulls back.

You see, the market will continue its uptrend—even if it briefly resets in the coming weeks as I expect it to. As I’ve explained before, with many professional investors on vacation, summer is a volatile season for stocks.

In fact, August has been the worst-performing month for the S&P 500 since 1994. The index loses an average of 0.6% during August each year.

Right now, the smart money is taking a pause from buying. That’ll likely lead to a pullback. But when buying restarts, it’ll hand us new opportunities.

In the meantime, I’m using these overheated conditions to take profits on trades I don’t intend to be in for the long-haul.

But I’m not touching my core holdings or long-term positions. As I mentioned above, history shows the market will resume its march higher after any resets.

So if you haven’t already, trim some risk and raise some cash. You’ll have your dry powder and buy tickets ready for great stocks selling at discounts in the coming weeks.

P.S. Years ago, my former firm helped create the fastest high-speed trading system in Wall Street history. But my private system takes it one step further. In just 20 minutes, it allows me to spot America’s fastest-growing stocks up to 30 days before they soar.

It’s the same system I used to help my subscribers capture triple-digit winners like The Trade Desk and Paycom in under nine months this year. It’s like trading on steroids—and you can get a rare peek under the hood of my system right here…