Imagine you had a time machine…

You go back to the early 1960s and sign musical acts like the Rolling Stones or the Beatles while they’re still playing in seedy dive bars in front of a handful of people.

A few years later, they’re playing in sold-out stadiums in front of thousands of people. And their albums are going multi-platinum.

How much would you make per year just from holding the rights to their music?

We can’t put an exact figure on it.

But we do know this…

The Beatles’ music catalog is so lucrative, legendary pop star Michael Jackson once paid $47 million for it just to get a cut of their massive royalties.

Well, maybe the time machine part is… But the idea of signing the next big act and generating a lifetime worth of wealth from their royalties isn’t.

Ahmir “Questlove” Thompson is a member of the legendary hip-hop band the Roots. Today, they’re the in-house band for The Tonight Show Starring Jimmy Fallon.

If you haven’t heard of Questlove or the Roots, don’t worry. This isn’t about rap music.

However, you will be interested in what Questlove recently said about NFTs. More on that in a moment.

First, if you’re not familiar with “NFT,” it’s short for non-fungible tokens.

They’re a subsector of cryptocurrencies. And they’re part of the huge “metaverse” trend we’ve been following in the Daily since August.

In short, NFTs are digital tokens that allow you to trade all types of assets. The tokens also prove the authenticity and ownership of the assets.

And many of them have been exploding in value…

One example is the CryptoPunk craze. 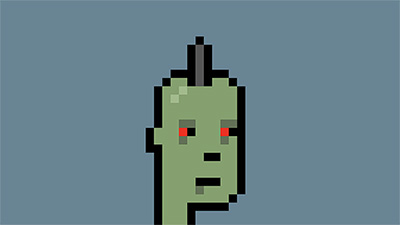 So what does this have to do with Questlove?

Like many people, he couldn’t understand the concept of NFTs when he first heard about them… Here’s a bit from his interview last week with Yahoo Finance:

When I first heard of digital art being monetized, sold and becoming big business it was head scratching.

But revolutions usually start with a lot of head scratching in the beginning – then they just become the norm.

Although he couldn’t wrap his head around NFTs at first… Questlove now believes, “ten years from now, the idea of tangible art might be a thing of the past.” (Emphasis added.)

But it may happen sooner than that…

The 33 winning bidders received up to 11 bonus song NFTs from the album. And each token is redeemable for the physical vinyl, signed by 3LAU.

Look, we understand if you think it sounds crazy for people to pay over $350,000 to own a “digital” album… especially when it’s easier than ever to stream or share music online.

But is it any crazier than someone paying $25.4 million to buy a shredded painting by the artist Banksy?

Or as “crazy” as when convicted “Pharma Bro” Martin Shkreli paid $2 million for the only copy of the Wu-Tang Clan’s Once Upon a Time in Shaolin?

(Just last month, the FBI auctioned off the album for $4 million to pay off a judgment against Shkreli.)

So Questlove has a point… traditional, “tangible” art as we know it is quickly evolving for a digital metaverse world.

Look, the collectibles market has always been a playground for the rich and famous. But now, NFTs and fractional investments give the little guy a chance to get in on the party.

Just remember that NFTs are highly speculative… By definition, each is one-of-a-kind. So do your research, and don’t invest money you can’t afford to lose.

But if you’re not fully sold on NFTs yet… you can still take part without buying a CryptoPunk or a million-dollar Wu-Tang Clan album.

There’s another type of token that’ll allow you to earn income from the underlying technology behind NFTs.

Instead of owning rights to the art or music – you’ll own “rights” to the technology.

Another Way to Profit From NFTs

Few investors know of them… and even fewer understand their massive potential.

They give you access to the explosive upside of crypto… and allow you to earn more crypto on top of your initial investment.

They’re a way for blockchain projects to drive the adoption of their technology… and allow early investors to participate and cash in on the project’s success.

So they’re a perfect way to play the NFT trend without buying speculative digital art.

Right now, we have readers making over 1,200% per year in one Tech Royalty based on their original investment… and that’s in addition to six others yielding more than 100%.

But the best is yet to come…

Teeka says a huge catalyst on the horizon will bring Tech Royalties into the mainstream… and it’s going to happen very soon.

Thanks to a radical code change, this catalyst is on the verge of launching Tech Royalties to the stratosphere.

Teeka calls it the “Second Phase.”

It’s programmed to happen just once… and Teeka believes it can help you start to unlock 10 lifetimes’ worth of S&P 500 gains over the next 365 days.

So to prepare our readers for the Second Phase, Teeka is holding a free “Tech Royalties 2.0: The Second Phase” livestream tomorrow at 8 p.m. ET.

He’ll share his No. 1 Tech Royalty to buy now, plus a special bonus for event VIPs (see the P.S. below).

On top of that, he’ll release details on six Tech Royalties you can use to start building 10 lifetimes of wealth over the next 365 days.

So, click here to reserve your spot tomorrow night at 8 p.m. ET…

P.S. In addition to revealing his No. 1 Tech Royalty tomorrow night, Teeka’s also going to release premium research on this crypto – for free – to event VIPs…

But full disclosure: This valuable research is password-protected, and the password will only be given out during the event.