Editor’s Note: In today’s Daily, master trader Jeff Clark tells the story of a client’s perfectly executed trade that ended up going horribly wrong… and gives three lessons he learned from that mistake.

The stock market has entered “the worst six months of the year.”

The S&P 500 makes its best gains between November 1 and April 30. The period between May 1 and October 31 tends to be negative.

The exact historical figures vary depending on who you ask. But there’s a good reason the Wall Street cliché machine advises to “sell in May and go away.” Stocks don’t do very well this time of year. And most of the major stock market disruptions of my lifetime occurred during this six-month window.

Smart investors should take some time off. Enjoy the fruits of the “Trump rally.” Cash in your 13% gain on the S&P 500 since last Halloween and enjoy the summer. We’ll see you back in the action in time for Thanksgiving.

But… if you want to make some money while the rest of the world is losing it, then stick around. Smarter investors could have the best six months ever.

Think about this for a moment…

Over the past 20 years, the Volatility Index (VIX)—a measure of the price investors are willing to pay to insure their portfolios against a significant market decline—has traded between a low of about 10 to a high of about 80.

Recently, the VIX closed at 11—one of the lowest readings in the past 20 years. This happened at a time when the S&P 500 closed near an all-time high.

So with the broad stock market trading at its highest level ever, insurance is about as cheap as it has been in the past 20 years.

In other words, as we enter the worst six months of the year, put options—bets that the stock market will fall—are as cheap as they’ve been in two decades.

This is a remarkable opportunity to profit as stock prices decline. Speculators can risk relatively small amounts of capital and achieve HUGE returns if stock prices fall.

But there are a few tricks to profiting on the downside…

How to Profit as Stocks Fall

Over the long term, stocks go up.

Don’t argue about it. That’s just how it is. The stock market moves higher over time.

So short sellers—those folks who profit as stock prices fall—face an uphill battle.

Of course, there are situations where short sellers will ultimately profit even if the broad stock market moves higher.

For example, companies that commit fraud, take on insane amounts of leverage, or overhype a fad business almost always eventually crash and burn. But opportunities to short the stock in these firms are few and far between.

For the most part, traders who are looking to short sell are going to trade on momentum. They’re going to look for overbought situations that look ready to reverse.

And they’re not going to stress out about losing 100% on a trade because they kept their position size small enough to digest the loss.

How This Great Trade Went South

Let me tell you a story about the absolute best and worst put option trade I’ve ever seen.

The trader made the most money I’ve ever seen on one put option trade, then he gave it all back…

In September 1987, I was running the trading desk for a small regional brokerage firm. We had a handful of big-name clients, folks who appeared regularly on the Financial News Network (the precursor to CNBC).

One of these clients was a value-oriented newsletter writer. His investment style was ultra-conservative and ultra-prudent.

So in September 1987, when this client bought a large number of put options on the S&P 100 (OEX), I took note. It was the first option position this client had ever purchased. He was buying these put options to hedge his managed-money portfolios against a sudden crash in the stock market.

When the stock market crashed on October 19, 1987, the put options this client purchased rallied enough to completely offset the decline in his stock portfolios. It was, in my opinion, the most perfect hedge anyone executed prior to the crash.

But it turned out to be a disaster for his accounts.

You see, the money manager never sold the options.

Despite the market crashing, despite the VIX jumping above 100, despite the options he purchased trading for 20 times the amount he paid, he wanted to maintain the hedge. He wanted to keep his insurance in case stocks dropped even more.

When his options expired in November, even though the broad stock market was almost 25% lower than where it was when he bought the puts, his put options expired worthless.

Stocks hadn’t rallied much off the October crash bottom. The S&P 500 was maybe 5% higher.

The stocks this advisor held in his managed accounts were still suffering from the crash. And he never collected from the insurance he bought to protect his clients from the crash.

His clients suffered from the decline in the market, and they suffered from paying the option premium that was supposed to protect them from a crash.

So what appeared to be a brilliant move in September 1987 turned out to be an expensive mistake by late November. His clients suffered from a decline in their stock holdings, and they also suffered as the OEX put options expired worthless.

The lesson here is simple…

When you’re betting on a broad stock market decline, you need to buy cheap put options AND you need to be willing to cash out of the trade when it moves in your direction—even if you think the move will go farther.

In my experience—which goes back more than three decades—if you want to profit on the short side of trading stocks, you need to get three things right…

Editor’s Note: Tomorrow, Jeff will open up early-bird registration for his upcoming presentation. During the webinar, he’ll reveal a trading strategy that he’s been developing for over five years.

It has to do with timing trades around “profit windows” that open at certain times each year. When these windows open, you have the chance to make very large (and fast) gains.

In the past year, Jeff tested this strategy on 35 trades using his own money… and his success rate was 90.2%.

Jeff says it’s the biggest breakthrough he’s made in his entire career. So be sure to stay tuned to the Daily for more information on this free event.

Bitcoin is powering ahead of major world currencies.

Today’s chart looks at how bitcoin has performed relative to the dollar so far this year.

And it tracks that against the performance of the British pound, the euro, and the yen relative to the dollar. 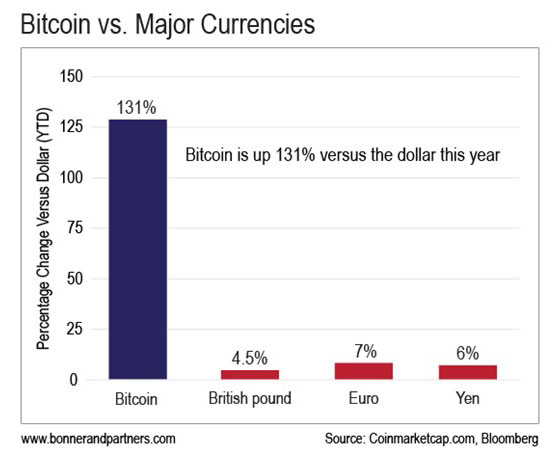