January is typically a strong month for the economy. That’s when many people get their year-end bonuses and put them to work in the market.

In fact, for some investors, January is a barometer for the entire year.

The last 36 times January had positive gains, 30 of those years ended with the overall market higher… That means 83% of the time, January is a good indicator for the rest of the year.

But if you’re betting on earnings growth to continue this year, you may be setting yourself up to fail.

Wall Street analysts like to play a shady little game of “bait and switch” with ordinary investors by using overly optimistic earnings numbers.

And if you get duped by them, your portfolio could be worse off at the end of the year.

I’ll show you how this game is played in a moment. But first, let me show you why January’s optimism might peter out before the year is over…

We Are in the Midst of a “Profits Recession” 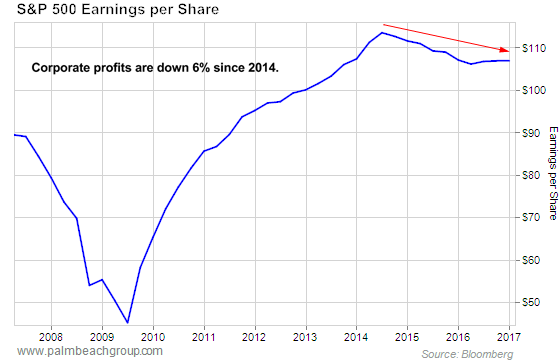 The last time profits turned down was in 2007. Much like today, the market defied gravity and kept going higher…

But when the market ran out of steam, it crashed 50%.

Investors have bid up companies because they’re expecting future growth. And right now, expectations are high.

A jump that big is unrealistic.

You see, profits generally don’t rise that much in one year unless they were preceded by a huge economic crash. But we’re still in the midst of one of the longest bull runs in history.

If you don’t dig for these “fixed” numbers in company earnings statements, your portfolio might be a mark for one of Wall Street’s most dangerous games…

Wall Street analysts like to promise one thing. But many times, they deliver something else entirely. It’s a shady little game of “bait and switch.”

The game allows for analysts to make higher valuations in the present… but then gives companies an easier target to “beat” their earnings estimates later on.

Analysts start the year with a relatively high earnings estimate. But as the year progresses, they slowly lower it.

Take Apple for example. It’s the largest company in the S&P 500.

At the start of 2016, analysts predicted the company would earn $9.85 per share. But as the year progressed, it became clear that iPhone sales were slumping and Apple’s profits would suffer because of it.

That’s $1.59 per share less than analysts forecast at the beginning of the year. So they were off by 16%.

But if you review Apple’s earnings releases from 2016, you’d see that they “beat” earnings in three out of the four quarters. Those adjusted earnings beats helped Apple’s stock gain on the year.

For instance, at the beginning of 2016, Apple’s third-quarter earnings estimate was $2 per share. But by the time earnings came around in July, the target had been lowered 30% to $1.39 per share.

The adjusted earnings allowed Apple to clear the lower hurdle… and show a beat with earnings of $1.42 per share.

And that’s how the game is played.

Analysts do this with almost every company they follow. So when you hear that a company beat its estimates, be wary.

As we show you above, the signs are pointing to a profits recession. If that’s the case, you should take any overly optimistic projections with a grain of salt.

We’re keeping our eye on actual and projected earnings… And we’ll let you know how earnings season really turned out.

Gold appears to be carving out a bottom…

After topping out in the summer of 2016, gold fell 17% by December. But as you can see in the chart below, the pattern is changing. 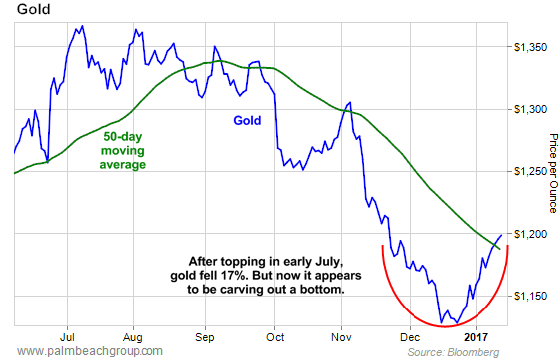 Now that gold has broken above its 50-day moving average, it should find some support.

If gold prices can hold the 50-day average over the next few days, the new price target will be $1,275… a 6% rise from here. If not, look for gold to fall back to its December lows.

Illinois Pension in Death Spiral: Illinois hasn’t had a balanced budget since 2001. That problem will only worsen as the nearly $170 billion in unfunded promises made to state worker retirements come due. Pension costs alone now consume 25% of the state’s entire general fund budget.

Illinois is just one example of a ticking time bomb that could blow a $7 trillion hole in America’s retirement savings. If you’re looking for ways to protect yourself, check out our special issue on America’s pension crisis in January’s Palm Beach Letter. In it, PBL editor Teeka Tiwari shares several safe-haven investments to protect your savings from the upcoming government-led money grab.

A Miracle Cure for Blindness: Researchers at the University of Pennsylvania are working on some promising gene therapies to cure inherited blindness. They say the new methods could eventually help repair or replace eyes damaged by genetic defects.

We’ve been all over this new trend in Palm Beach Confidential. And if you’re a PBC subscriber, you’ll want to read December’s issue. Our pick in this space is up 21% since we recommended it. But you need to act fast… It’s getting close to its buy-up-to price.

The End of Obamacare?: President-elect Donald Trump has pledged to repeal Obamacare and replace it shortly thereafter. Longtime PBRG friend Bill Bonner says you can get things like that done in the business world. But in the world of the Deep State, it won’t happen. That’s because America’s health care system is a cash cow for a substantial and growing part of the elite.

From Heather W.: Loved Teeka’s January 11 Confidential update about the Consumer Electronics Show (CES). I also love the fact that Teeka gives subscribers multiple options for consuming his content. I typically use the audio option, as it allows me to multitask.

I was listening to this update while cooking dinner, and every time you mentioned Alexa, my Alexa would light up and then apologize for not understanding the question. I got her for Christmas and am having a blast with it. I see tons of potential in this space.

Keep up the great work!

Editor’s Reply: We’re glad you enjoyed the update, Heather. Big T tells us he’s doing a deep dive into the research he gathered from his trip to CES in Las Vegas. So you can look forward to him sharing more exciting updates.

(If you’re not a Confidential subscriber, you can hear a shorter summary of the top trends Teeka spotted at CES in this 3-Minute Market Minder.)

ARE YOU OUR NEXT MILLIONAIRE NEWSLETTER WRITER?

We’re looking for a smart analyst to help write a newsletter and share big ideas with the world. If you’ve ever wanted to make a living reading, thinking, and writing, we’d love to hear from you.

The compensation will depend on your level of experience. Know this… Dozens of analysts in The Agora (our group) who write newsletters earn up to $500,000 annually. Over the years, the company has made millionaires of more than 30 employees.

Our friends over at Casey Research have an important warning… They say in 2017, we’ll be well into the trailing edge of the gigantic economic hurricane that we entered in 2007.

No matter what President Trump does to try and stimulate the economy in the days ahead… this giant financial hurricane cannot be stopped. If you don’t want to be blindsided by this storm, click here or the image below to learn how you can protect yourself (and potentially profit from the crisis)… 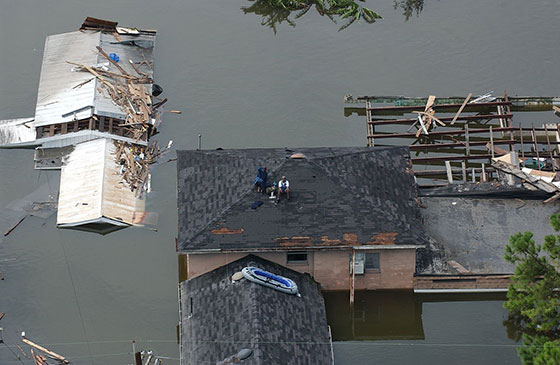