Exuberant investors scooped up the trendy stock, and shares closed at $78.29 that day. But sentiment soon reversed. And now, shares are trading around $60—about a 23% drop in less than two months: 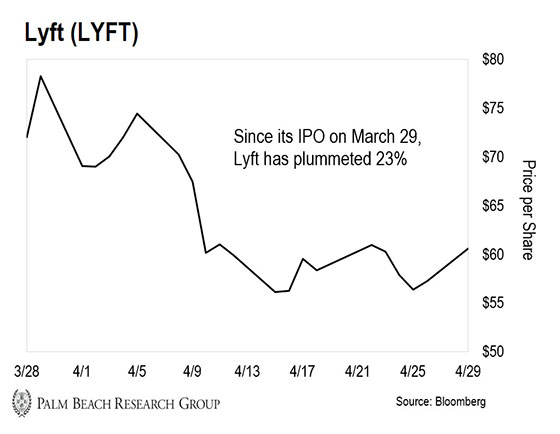 Here’s why I’m telling you about Lyft…

According to research firm Renaissance Capital, over 220 private companies plan to go public in 2019. That would make this year’s IPO market the largest ever.

Many of these companies are household names—including Uber, Airbnb, and Pinterest. Wall Street calls these popular IPOs “hot issues.”

Now, we don’t know whether Lyft will be a great investment. It could turn into a 10-bagger or more one day.

But what we do know is: Buying “hot issue” companies like Lyft right out of the gate (when they debut) can burn a hole in your portfolio.

So in today’s essay, I’ll tell you how long you should wait before taking a stake in them…

In it, they mainly recommend safe, income-producing assets like dividend-paying stocks that fit into our overall wealth-building strategy. And they also look for off-Wall Street ideas like cryptocurrencies, collectibles, and tax lien certificates.

Now, Grant has worked in various roles in the investment industry for almost two decades. After spending three years as an investment editor at Weiss Research, he’s returned to The Palm Beach Letter—where he was an analyst from 2013 to 2015.

And when it comes to investing safely, Grant is an expert. So I asked him about the risks of investing in hot issues. Here’s what he said about buying them:

Unless you’re an accredited investor—meaning, you make over $200,000 a year or have a net worth over $2 million—you’re mostly out of luck. So you’ll have to wait until the stock goes public. Plus, you can experience a lot of volatility by buying right away.

At PBRG, we try to find safe, consistent ways to grow your income. And investing in IPOs is neither.

Now, a few of this year’s IPOs have done okay so far. But as a general rule, I’d avoid them. And if you do like the companies, wait for their lock-up periods to expire before investing in them… They’ll have much less volatile rises after that.

You see, when a company is private, a small number of insiders can buy shares early. These insiders include company executives, employees, and venture capitalists. But they’re bound by this lock-up period when the company goes public.

So how long does it last?

It Pays to Wait

Most lock-up periods last about 180 days (six months) after the IPO date.

The market knows that once this time frame expires, insiders will sell a significant number of their shares.

Since they’ve been holding their shares for usually five to 10 years, the IPO is the first chance for them to take some money off the table.

Take Facebook, for example. The social media giant bottomed four months after its IPO. And even if you’d waited the full six months, you would’ve still gotten in at 45% below the IPO price… Twilio is another example. (The company makes communications platforms used by companies like Airbnb, Lyft, and Uber.) It was one of the hottest IPOs in 2016.

Like Facebook, Twilio initially took off. But if you waited for the lock-up period to expire, you could’ve gotten in at a discount to its IPO price… Of course, not all IPOs follow the same pattern as Facebook and Twilio. But one thing holds true: If you wait, you’ll almost always have the chance to buy a hot-issue stock at a cheaper price.

So ignore the hype. Unless you’re an insider (and chances are, you aren’t), you’ll likely end up overpaying for shares when a company goes public.

As Grant advises, wait for the lock-up period to expire. You’ll see better prices in six months—even on the best-performing IPOs.

P.S. As Grant pointed out, unless you’re an accredited investor or insider, you’re unlikely to make big gains from hot issues. The ugly truth is: Regular investors are blackballed from these amazing investing opportunities.

But in the March 2019 issue of The Palm Beach Letter, Teeka and Grant uncovered a way to invest alongside the world’s best venture capital (VC) firms, largest institutions, corporate tycoons, and billionaires.

It’s a little-known fund that’s cheaper, safer, more transparent, and more liquid than what VC funds even offer to the uber-wealthy. Plus, they believe it can return between 15% and 25% per year over the next decade.

And if you’re not yet a PBL subscriber, you can learn how to get your risk-free subscription for just $49 right here.

Reader commentary continues on President Trump’s goal to make the U.S. the leader in 5G technology…

From Daryl M.: Firstly, thanks for your insightful daily essays. You’re usually on the money.

However, I’m totally disgusted with your support of the worldwide rollout of the very sinister 5G technology. It’s terrible. The microwaves emitted by 5G will give every person and animal cancer… And it also will kill trees and insects.

Governments are lying in order to use 5G networks as the final piece in their silent weapons systems against the human population.

I thought President Trump was good—until he started supporting this 5G terror. Any president who’s truly for the people wouldn’t support this population cull-weapon. Please be a part of the fight to save humanity.

From Eric R.: Of the presidents I’ve had in my lifetime, President Trump is the best of the best. He says what he believes and doesn’t talk all sugar-icing like the previous ones. He’s an intelligent personality.

From Thomas H.: Please continue to send me your articles as often as you like. I enjoy reading all the up-to-date information.

From Leonard E.: I want to thank Teeka for all the information he sends. Have a blessed day!

There’s a key metal on the verge of a huge rally—but you’re not hearing about in the mainstream media.

You see, a radical new technology is about to take down the world’s leader of electric vehicles. And it’ll send this metal soaring in the process.

Not only that, it’ll flood one tiny, specific stock with a massive windfall starting any day now. To get all the details on how to profit, just go right here.