A 74% expectation of recession…

That’s the bad news from the National Association for Business Economics (NABE).

Last week, the NABE conducted a survey of 226 professional economists. And nearly three out of four see a U.S. recession coming by the end of 2021.

But count me among the contrarians.

Today, I’ll tell you why these economists are wrong—and more importantly, why you should be ready to bargain-hunt for great U.S. stocks…

The NABE survey cited several warning signs of a looming recession. The two most ominous: the ongoing U.S.-China trade war and the recent yield curve inversion.

Now, the smart money knows the trade war won’t be an issue in the long run.

As I’ve said before, President Trump is an old-school negotiator using hard-nosed tactics. But no matter what he says, we still need to trade with China to “make America great again.”

The U.S. is a consumption nation. We produce and export little, but import and consume a lot. That won’t change. Even if we could stop trading with China, we’d be importing cheap goods from other Asian or African countries within a year or two.

Nevertheless, I believe he’ll get a deal done. It’s in both countries’ best interests.

And let’s move on to the other red flag: the dreaded yield curve inversion.

Last week, the yield curve inverted for the first time since 2005—which preceded the 2008 Great Recession.

But there’s usually a 12–18 month lag between yield curve inversions and recessions. And frankly, this time is different.

Take the 2008 Great Recession, for example…

It rode a leveraged debt bomb. Speculators bought real estate on the assumption of never-falling home prices. Big banks bundled mortgages together and sold them as AAA-rated bonds to pension funds and endowments.

So when loan defaults soared above expectations, the housing market collapsed. The whole economy went up in flames. But that isn’t the case today.

As you can see in the chart below, housing starts have been steadily climbing since 2008… 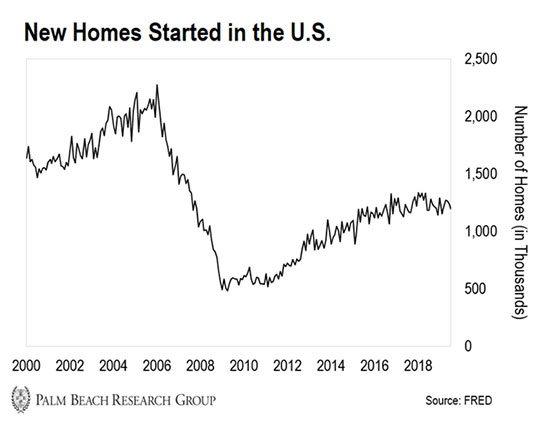 And here’s something else the Debbie Downers won’t tell you: Even if a recession does hit, market peaks generally follow 18–24 months after. 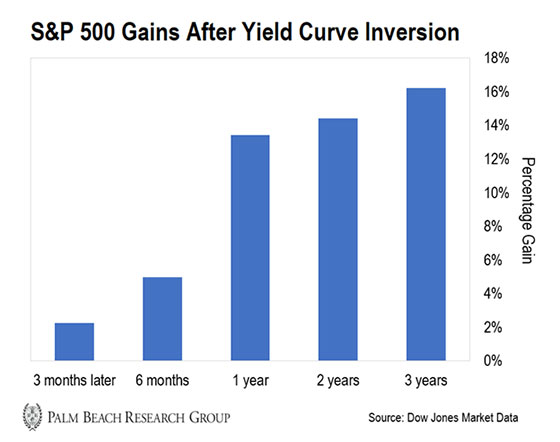 So even after an inversion, you want to be in U.S. equities in the long term.

The Safest Place in an Unsafe World

The selling and volatility we’re seeing is the combination of two factors: normal August volatility and knee-jerk reactions by investors. And neither of them means a recession is ahead. Wall Street notoriously shoots first and asks questions later.

And even if you think otherwise, the U.S. economy is still the strongest in the world. Consider this:

By comparison, the U.S. looks great.

Second-quarter earnings is wrapping up with fantastic numbers. About 75% of S&P 500 companies beat earnings and 57% beat sales estimates. Profit margins are increasing, too.

Plus, U.S. equities look more attractive than other securities, including “safe-haven” bonds.

Dividends are taxed at 23.8% (the maximum long-term capital gains rate). And bond income is taxed at the 40.8% maximum federal rate for ordinary income. This makes your after-tax return on stocks 57% more than on bonds…

So U.S. equities are the most attractive destination for investor capital right now.

And domestic small-cap names with low international exposure will benefit the most. They’ll weather the trade war better than multinationals.

These types of companies tend to be the big winners. And remember, always do your homework before making any investment.

Don’t let pessimistic economists scare you out of the market. Instead, use this fear to your advantage.

P.S. Economists don’t drive the markets—big institutions do. They can swallow up to 5% of any publicly owned company in America, from the tiniest microcap to a behemoth.

That’s why I created a system to predict their buying activity 24 hours to 10 days in advance. Years ago, my former firm helped create the fastest high-speed trading system in Wall Street history. So I know what to look for.

I’ve even used it to help my subscribers capture triple-digit winners like The Trade Desk and Paycom in under nine months this year. And now, you can get a rare peek under the hood of my system—and see what it’s saying next—right here…