Forest fires are some of the worst natural disasters on the planet.

Each year, they destroy hundreds of billions of dollars’ worth of property… And cause thousands of large-scale casualties.

But despite the terrible toll forest fires can take on society… they actually make our forests healthier.

Fires consume the weaker trees and the undergrowth. The stronger, more stable trees that survive have less competition for water, more nutrients, and greater room to grow.

The result? They thrive.

So, why am I talking about forest fires?

Because right now, we’re seeing one rip through the private markets… where companies raise funds before offering public shares on the NYSE or Nasdaq (called an initial public offering, or “IPO”).

According to McKinsey & Company, the private equity market has over $5 trillion in assets under management… and until recent regulatory changes, 99% of Americans couldn’t access this pool of capital.

That’s why I call it the “hidden” market…

Before those changes, it was walled off from the average investor. But the extreme weakness in the broader public market has ignited a forest fire of sorts in private funding.

We’ve seen a massive decrease in IPOs coming to market this year… After record-high levels of IPO activity in 2021, we’ve seen a significant slowdown so far in 2022.

IPOs have raised about $65 billion so far… Down about 70% from $219 billion in the same period last year, according to data compiled by Bloomberg.

That puts the global IPO market on track for the lowest quarterly proceeds since the onset of the coronavirus pandemic in 2020. 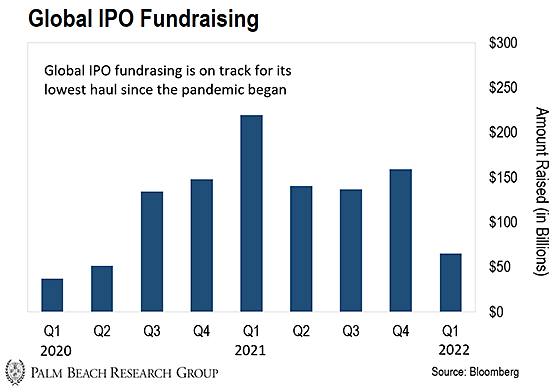 Now, no one is popping champagne over a $65 billion drop in funding. But while this slowdown may look bleak to some, I see it as a moneymaking opportunity…

Like a forest fire that clears the underbrush… market weakness clears out low-quality private deals.

When you’re in a raging bull market like we were for much of 2021, pretty much any private deal will get funded because of FOMO (fear of missing out).

So every deal is raising money… Even the really bad ones. That’s why we saw a record number of IPOs last year.

But private deals start to dry up in a down market like we’re experiencing now.

You can’t pitch bad deals anymore. There’s just no appetite for them.

This clears out the rubbish, offering exposure to higher quality deals.

The best of these high-quality ideas are what I call “pre-unicorns.” Or companies valued at less than $1 billion.

No other market event creates more overnight millionaires than the right pre-unicorn going public. For example:

If you want to accelerate your wealth journey from decades to as little as 24 hours… you need to invest in private companies like Google, Facebook, and Twitter before they become unicorns.

And with so many bad companies getting cleared out, the chances of finding these pre-unicorns are better than ever.

Nine out of 10 startups fail… And even the best VCs have 100% losses with these investments.

So only invest what you can afford to lose. No amount of vetting can eliminate the risk associated with pre-IPO companies, even if they’re a pre-unicorn.

To find your own private deals, you can search a crowdfunding platform like Republic.

It’s one of the top equity crowdfunding firms in the space, with a 19% market share… And it’s easy to set up and fund an account.

Just be sure to spread your bets across different individual investments to reduce your risk and create the best chance of hitting a big winner.

With all the volatility we’re seeing in the public markets, now’s a great time to get exposure to the best private companies and pre-unicorn deals.

P.S. Before the regulatory changes I mentioned above, you simply couldn’t buy tech giants like Apple, Uber, and Tesla before they went public.

A chance to finally close the gap between the life you live and the life you want… by collecting 5, 10, or even 30 years of gains with just one pre-IPO deal.

And over the last six years, my 281% average annual returns have outperformed even the world’s greatest investors…

Click here to learn how you can start investing in pre-IPOs right now… and join the thousands of subscribers already cashing in on the world’s best private companies.