In yesterday’s Daily, we told you one of the best shortcuts to picking great stocks is to follow the best investors.

And it’s easy to do. Just look at the quarterly 13F filing.

[All funds that have more than $100 million under management need to file a quarterly 13F report with the U.S. Securities and Exchange Commission (SEC). It requires large funds to disclose the stocks they own 45 days after every calendar quarter.]

In the 13F filing, you can see what the big boys are doing. And if you like what you see, you can follow along.

We do. And it helps us accomplish our mission at the Daily: to beat the market and help make our readers richer every day.

So What Are We Seeing?

The latest round of 13F filings shows that hedge funds added more financials (banks and insurance companies) to their portfolios than any other sector.

The last time this happened was the second half of 2012. This was just after the sector had bottomed and started a three-year 90% run higher.

One guru buying up financials is investor extraordinaire Daniel Loeb.

In the last quarter, he more than doubled his allocation to financials. It was a very smart move.

We’ve told you before that deregulation and lower taxes should be a tailwind for financials. But he’s buying financials for another reason, too…

When interest rates rise, so do “net interest margins.”

A net interest margin is the difference between the rates banks charge customers for loans… and how much they pay in interest on deposits. The wider the margin (sometimes called the “spread”), the more profits for the banks.

[For instance, if a bank charges customers 5% on loans but pays customers 1% interest on their savings accounts, the “spread” is 4%.]

Net interest margins usually increase along with interest rates. Here’s why that is important today…

And if that happens, it will signal the Fed is finally abandoning the zero-interest-rate policy of the last seven years.

Loeb isn’t the only one holding on to financials.

We follow the 13F filings of 32 funds. Right now, these funds have 25% of their capital in financial stocks. That’s almost double the weighting of financial stocks in the overall market. 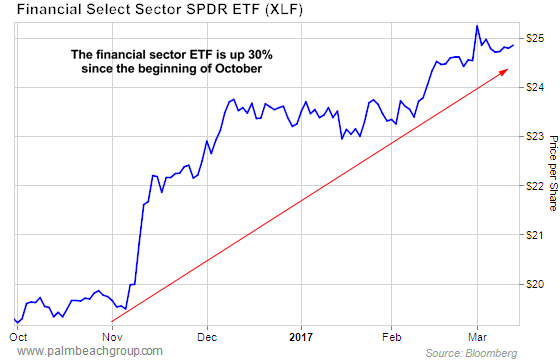 As a whole, the brightest investors in the world own far more financials than any other sector.

Seeing funds load up on a sector is a good omen.

Continue holding on to your financials. If you’ve missed out so far on this rally, you can buy a small portion right now. 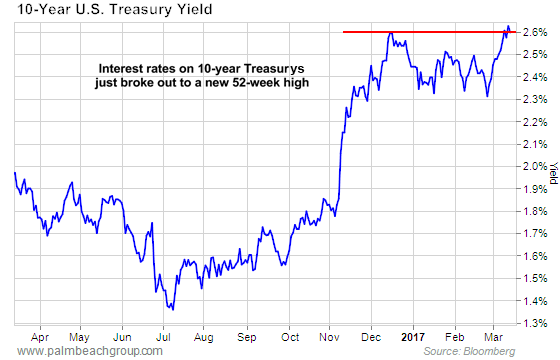 If the 10-year yield can hold this breakout and stay above 2.6%, look for rates to shoot up toward 3% in the next few months.

And if that happens, you’ll be glad you own financials.

Pension Crisis Hits New Jersey: Public pensions continue to falter across the country. The latest example comes from New Jersey where state pensions are underfunded by $50 billion… a staggering number for a retirement plan that’s been set up to cover roughly 780,000 current and retired government workers. Gov. Chris Christie wants to lower the expected rate of return from 7.9% to 7.65%. That may seem subtle, but it shows that pensions for too long have been using unrealistic expected returns to keep themselves afloat.

We’ve published a special report about how government pension plans fiddle with numbers to make them look solvent… when they’re actually going bankrupt. It’s a must-read for all pension plan members. Palm Beach Letter subscribers can access it right here.

Bitcoin Reaches Parity With Gold: After being the top-performing currency for the last two years, bitcoin has hit another milestone. The price of bitcoin is now on par with an ounce of gold. Today, gold trades around $1,205 per ounce. Bitcoin trades at $1,257. Check out this must-see infographic to see how bitcoin’s meteoric rise pushed this new cryptocurrency past the price of one of the world’s oldest assets.

In Bad Company: There are only two companies left with top-notch AAA credit ratings: Microsoft and Johnson & Johnson. The software firm and consumer goods giant are the only private, non-financial companies left with AAA credit ratings awarded by Standard & Poor’s. This furthers our thesis that you should be very selective in choosing your stocks. If you need help picking them, our Elite 25 is a good place to start.

From Brad S.: I am following your Elite 25 list of stocks. Thank you for continuing to make updates. I’m able to review your picks on Yahoo Finance (for ratios) and TD Ameritrade. I look forward to future articles on the Elite 25.

If you’re over age 50, and you’re still haunted by the ghosts of 2008… our friends over at Stansberry Research have some news for you: Your suspicions are correct…

We’re smack in the middle of the greatest stock market bubble in history. And when it bursts—it will devastate millions of investors.

Right now, we’re on the verge of a massive panic. But not the kind of panic most people expect. Click on the video below to learn more… 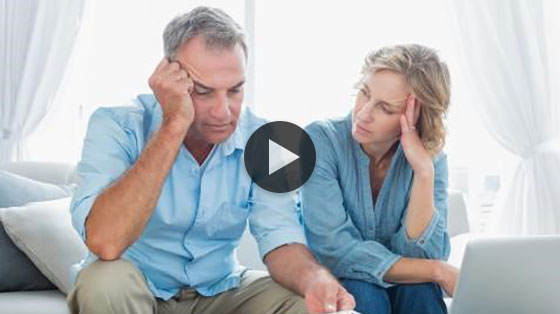