It was a technological marvel…

The year was 1954, and the first color TV had just launched.

People stared in awe as they saw their favorite shows come to life like never before. It was a seminal moment in technology… and it was a complete dud.

In fact, color TV might have been the worst technology launch in history. It took 25 years before it caught on.

As a result, early investors got crushed.

Everyone agreed that color TV was awesome, but no one could afford it. Sets were just too darn expensive.

Color TV technology was amazing, but the price put it outside average Americans’ reach.

But as the technology developed, something happened… The price started to drop. By 1975, manufacturing costs had dropped low enough that TV makers could sell a color TV for just $300 ($1,338 in today’s money).

Once that happened, color TV adoption took off. By the early 1980s, 80% of all TVs sold were in color.

It’s a simple relationship… and very lucrative if you know how to play it.

I call this the mass adoption point (MAP) ratio.

The MAP ratio kicks in when prices get low enough to start driving mass adoption. As I mentioned above, it took color TV 25 years.

It launched three years ago but has failed to gain any traction. Just like color TVs, it’s an amazing technology, but it’s been priced too high.

All of that is about to change…

I’ll tell you what it is in a moment… But first, let me explain how the MAP ratio works.

As more people buy it, the price drops even further, which entices a new stream of customers. This virtuous cycle of lower and lower costs is what drives mass adoption of a new technology.

Check out the chart below… It shows the market adoption of color TVs. 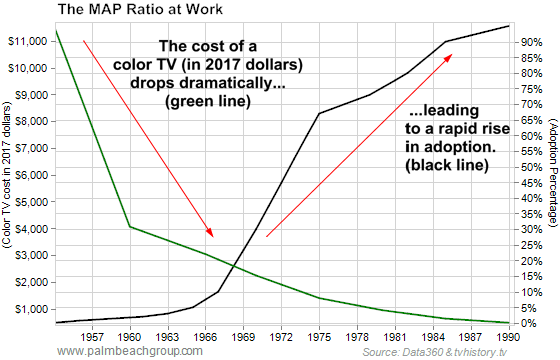 As you can see, as prices went down, mass adoption took off.

Over the years, the MAP ratio has shown up again and again. Each time it’s kicked in, it’s made a whole new crop of investors rich. As the MAP ratio kicks in, share prices soar.

This has happened with other technologies such as computers, cellphones, and personal music players (like the iPod).

Check out the chart below. It shows how much a $10,000 investment would have grown during each MAP cycle in Dell, Nokia, and Apple. 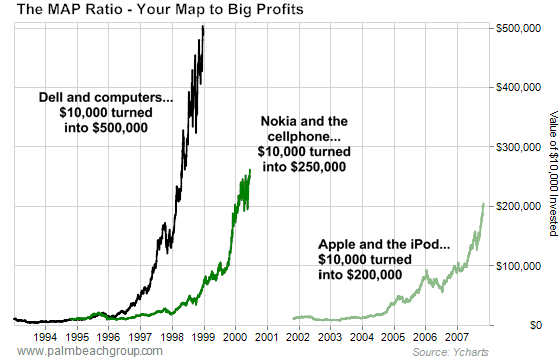 As prices started to drop, consumer adoption rates exploded higher… along with the stock prices.

Making money off the MAP ratio is easy. All you have to do is wait for the hardware prices to drop. Once they do, adoption rates soar through the roof… and so do the share prices.

Well, I’ve waited three years, and the time has finally come to hitch our wagon to this next big tech trend…

The Next Breakout Tech Trend

The technology that’s about to take off is called virtual reality (VR).

VR technology tricks your eyes and your brain into believing you’re in a virtual 3D world.

Just like color TVs, virtual reality headsets and the gear needed to operate them have just been too expensive. Currently, it costs over $2,000 to buy VR hardware.

VR will never go mainstream with a price tag that high… and that’s why I’ve stayed away from it.

Remember the lesson of the color TV?

Virtual reality has just been too expensive… but that’s about to change. A brand-new MAP cycle is set to begin… and that’s why we’re getting into virtual reality now…

As I told you, I’ve been waiting three years for the right time to get into the VR space.

Here’s what has me so confident: A new version of virtual reality called “mixed reality” is going to spur mass adoption by lowering prices.

[“Mixed reality” seamlessly blends virtual images into the real world. An example of this tech is the smash-hit game Pokémon Go. In the game, Pokémon (short for pocket monsters) are projected into the real world, and players try to capture them.]

Leading the charge is Microsoft…

Later this year, it will launch a $500 mixed reality headset called HoloLens. It’s 75% cheaper than today’s $2,000 virtual reality setups. This move by Microsoft will attract millions of new consumers.

It’s just like what happened with color TVs in 1975. As soon as the price dropped, mass adoption took off.

Microsoft’s aggressive pricing is sure to pressure other manufacturers to lower their prices as well. By the end of the year, we may crack the $199 price point, and that will unleash another wave of consumer buying.

Microsoft has bigger plans than just the HoloLens.

The company will be releasing its Windows 10 Creators Update in the spring of 2017. It will feature a set of mixed reality tools for developers to use.

Mergers and acquisitions research firm Digi-Capital expects the sales of these devices to go from zero to $90 billion in just three years.

To put that in perspective, it took 10 years for smartphones to hit $90 billion in global revenue.

That’s not a typo. This technology is expected to grow faster than the smartphone market did.

Microsoft isn’t the only tech giant getting on the bandwagon. Amazon, Apple, Facebook, and Google are all aboard, too. Each is working on its own version of mixed reality technology.

If you own any of these companies, we recommend hanging on to them. This new MAP cycle will take all of them much higher.

If you’re a PBL subscriber, you can check out our latest pick in this space in the February issue right here.

CHART OF THE DAY

Much like gold, the cryptocurrency is becoming a popular way to avoid the War on Cash.

As governments continue to print money, institute capital controls, and seek ways to ban cash… bitcoin has served as a chaos hedge for those who want to preserve their wealth. 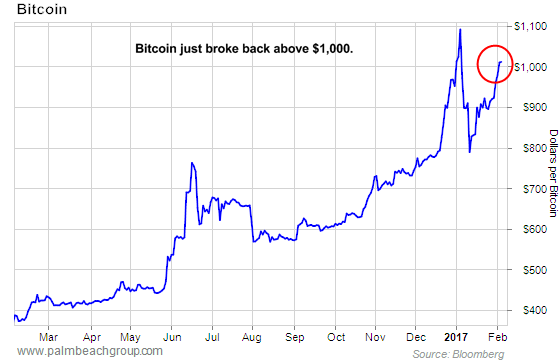 Right now, it looks like any pullback would be a buying opportunity for more bitcoins.

The other way to look at the “rubber band effect” is to note that the rapid return occurs only if you let go of the object. If you hang on and continue to stretch the band, it may break, leaving you unencumbered right where you are and free to progress further.

Life successes are about freeing oneself from dangerous encumbrances. (As long as you can find your way back if where you are is not where you should be.)

Dr. Q has been involved in some of the biggest mining discoveries ever… including a 24-million-ounce gold deposit in Northern Ontario…

Now, Dr. Q has discovered a similar massive gold deposit in Western Canada, called “Red Gold.” It’s 17 times richer than the average gold mine. Get the details of this major discovery right here…