It’s a common phrase. But how accurate is it, really?

Yesterday, I showed you why it might not be the best strategy if you’re looking to maximize your gains in the markets.

I also promised to do a deep dive on four indicators that can help you navigate the market’s ups and downs. And that should be in every investor’s toolbox.

So let’s take a look…

Four Indicators for Every Investor’s Toolbox

One of my favorites is called the Buffett Indicator.

It looks at the GDP and compares it against the stock market’s total value. You can see it in the chart below.

As the chart above indicates the historical average is at 121%. And right now, we’re sitting at roughly 150%.

So, is that good or bad?

If we turn to famed investor Warren Buffett himself, he says that anything above 200% and we’re playing with fire.

We’re way below this mark right now (though simultaneously being above the historical average).

To me, the current 155% reading says that the stock market is neither too cheap nor expensive. In other words, it’s fairly valued right now.

My second favorite way to tell if the stock market is undervalued or overvalued is something called the cyclically adjusted price to earnings ratio, or CAPE. You might also know it as the Shiller P/E ratio.

It’s based on the more common price-to-earnings (P/E) ratio.

The P/E ratio is one the most important financial ratios out there. It’s quoted on your brokerage firm’s webpage or on major financial news websites.

To get the P/E ratio for a stock, you divide the price of the stock by the company’s earnings per share.

What is different about CAPE, though, is that it looks at the last 10-year average of those numbers.

As you can see in the next chart, the CAPE number sits at around 29 right now. 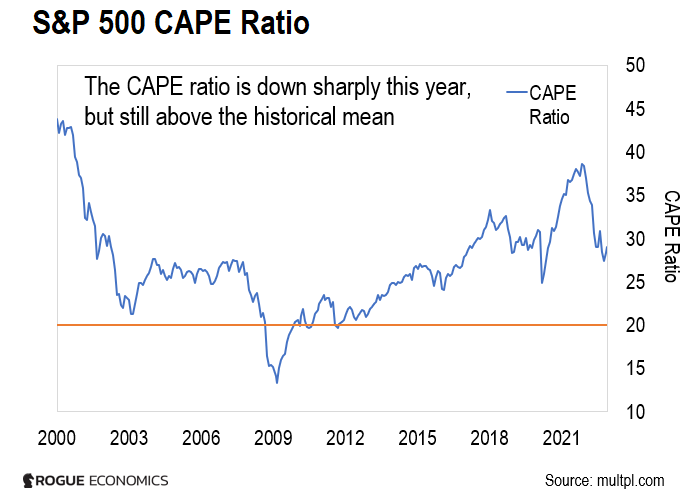 The third way I use to help me decide if the stock market is cheap or expensive is by looking at something called Margin Debt.

The idea behind it is this: The more people take on loans to invest money they don’t have… the more expensive (and hence riskier) the stock market is. 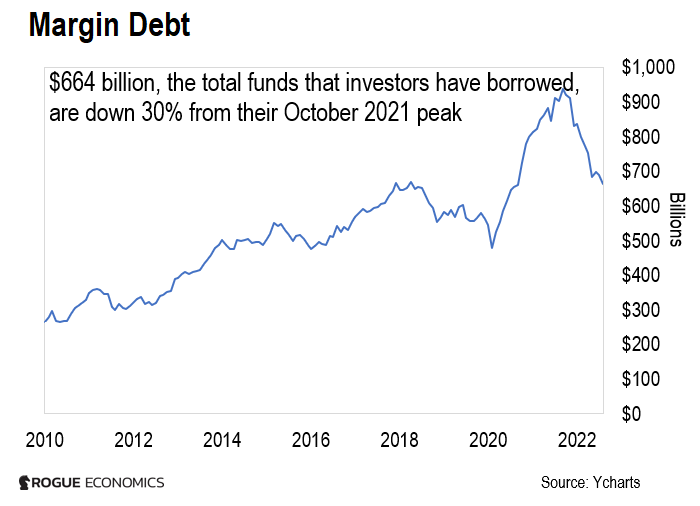 As you can see from the chart above, margin debt is currently sitting at the $664 billion level.

In other words, people aren’t really taking out loans to invest in the stock market right now.

Our fourth and final metric is something called the S&P 500 Reversion Model.

Now, the name itself makes it sound like it’s the most complicated one. It’s really not, though.

All it does is show us how far the market is from its historical trend line.

The further away it gets from that average (orange line) the more expensive the stock market is. And vice versa. 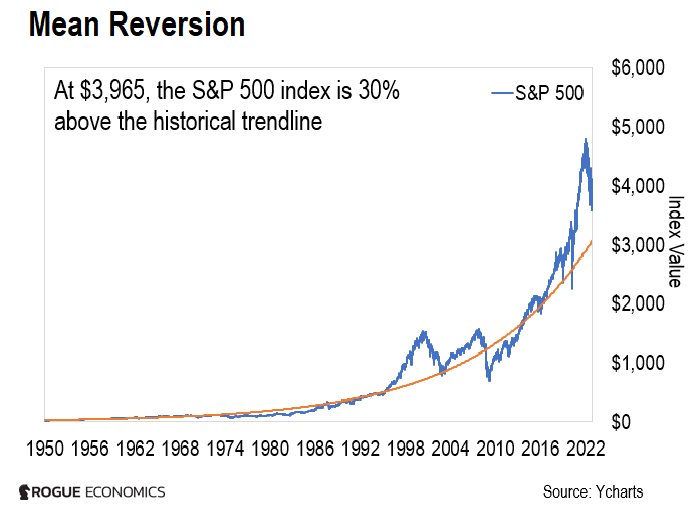 The current reading shows that the S&P 500 is 30% above its historical mean. So, the market is still relatively overvalued based on this metric.

What This Means for Your Money

So, we got a positive reading on two out of four metrics above. This means that this still isn’t the time to dive in headfirst. What can you do?

To start, consider investing smaller amounts over a longer period of time.

We recommend investing a fixed amount of money on a regular basis, typically monthly or bi-weekly. This is what we call “legging in,” or “dollar-cost averaging.”

You can also buy more when the stock market is cheap and less when it’s expensive. The tools I shared with you above can help you there.

Just don’t beat yourself up if you can’t time the tops and bottoms perfectly. No one can.

Ultimately, it comes down to another useful mantra: “Time in the markets is more important than timing the markets.”

That’s because the longer you stay invested in the market, the more you increase the odds of making money from it. That’s regardless of what the Fed does in the short term.

As long as you stay in the markets for at least five years, you can boost your chances of making money to 80%.

One way to take advantage of that is with the Vanguard S&P 500 ETF (VOO).

This exchange-traded fund (ETF) tracks the S&P 500 Index. It allows investors to gain broad exposure to the U.S. stock market.

It’s a straightforward investment you can access in a regular brokerage account. The fund doesn’t try to outperform the index. Instead, it aims to replicate its performance as closely as possible.

And if investing in stock indexes isn’t your cup of tea, you may want to check out some long-term investment opportunities along the lines of our five distortion profit themes.

Those themes are New Energy, Infrastructure, Transformative Technology, Meta-Reality, and New Money. For a quick recap on those, you can read my earlier essay, where I outline my thesis behind each of these.

Happy investing, and I’ll be in touch again soon.

P.S. At my Distortion Report advisory, I look for the best-in-class companies across our five distortion profit sectors. And right now, I’ve got my eye firmly on the New Energy sector.

See, everybody is positioning themselves to profit from the coming revolution in how the world creates, consumes, and stores energy. $755 billion flowed into one particular energy shift this year. And Forbes predicts that number will surge to $130 trillion.

You probably won’t hear about it from the mainstream media. Elon Musk is changing Tesla’s entire business model to capitalize on this energy revolution. But you won’t hear about that on the news, either.

To find out all about it – and a way you can get in on the action – just watch this presentation I recorded recently.