The financial world was facing ruin…

Citigroup lost $30 billion. Insurance giant AIG lost $100 billion. Things got so bad, the U.S. government had to take over the company.

According to CNN, more than 734 banks needed some type of taxpayer bailout.

But one financial company didn’t miss a beat. In fact, profits remained stable throughout the entire crisis.

That company is Jack Henry & Associates.

You may be unfamiliar with Jack Henry.

It’s not a major bank like Wells Fargo or Bank of America. And it’s not a big Wall Street firm like JPMorgan Chase or Goldman Sachs.

Yet it’s one of the most successful companies in the world.

Nearly every small and mid-sized bank uses its services.

As long as people bank online or transfer money electronically, Jack Henry will be in business. It doesn’t matter what else happens.

Jack Henry is what we call a “pick-and-shovel company.” These types of companies make the “tools” necessary to conduct business in a specific industry.

If you want exposure to an industry or to play a hot new trend, pick-and-shovel companies are a safe route to go.

In today’s Daily, we’ll share with you a fast-growing tech trend that we like… and four pick-and-shovel companies that will benefit from it…

How to Make Money in a Gold Rush—Without Finding Gold

During the 19th-century California gold rush, enterprising entrepreneurs figured out a simple to way to get rich—whether any gold was found or not.

Instead of becoming miners themselves, they sold picks and shovels.

So it didn’t matter which miners struck it rich or came away empty-handed. As long as people mined for gold, the pick-and-shovel guys made money.

One of the hottest trends today is social media. But as we told you in yesterday’s Daily, trying to pick a winner in this space is like playing the lottery.

Instead, we’ll find the next Jack Henry-type company in the social media space. These are the companies that make the “tools” necessary for social media to work.

To work a gold mine, you need at least two things: picks and shovels.

To operate a company in the social media space, you need the modern equivalent of picks and shovels: microchips and routers.

Microchips are the tiny processors found in your computer and smartphone. Routers direct communications traffic on the internet.

Computers and smartphones are the hardware of social media. You can’t chat, text, or send messages online without them. But all electronic devices need microchips to work.

An early leader in the microchip space was Intel (INTC). Its chips were in nearly every computer made. It didn’t matter which computer you bought; Intel was “inside.”

Smartphones also use microchips. And a major supplier in this space is Qualcomm (QCOM). It makes chips for Apple’s ubiquitous iPhones.

A newer arrival to the market is Skyworks Solutions (SWKS). It makes chips for mobile devices, including connected cars.

The other necessary technology for social media is the internet.

The internet is a global network of computers. These computers are linked by electronic, wireless, and optical technologies.

This vast virtual infrastructure is connected by routers. And the major player in this area is Cisco Systems (CSCO).

At one time, Cisco had a near-monopoly on routers. It doesn’t matter who your internet service provider (ISP) is… If they want to connect you to the internet, they go through Cisco’s routers.

Social media uses technology (hardware like mobile devices, smartphones, and computers) to create interactive platforms that connect groups. Individuals and groups use these devices to associate via the internet.

According to digital marketing firm Smart Insights, there are more registered social media users (8.04 billion) than people (7.4 billion) on the planet. And this space continues to grow. From 2016–17, social media use increased by 21%.

But here’s the thing… There are hundreds of social media companies out there.

But we do know this: No matter which of these companies emerge as winners or losers, they’ll need their versions of picks and shovels to operate.

So if you want a safer way to play the social media trend, go with the companies that make the chips for the devices and routers for the networks.

Some good places to start would be Intel, Qualcomm, Skyworks, and Cisco.

Compared to stocks, gold is trading on the “bargain counter.”

That’s the message of today’s chart, which tracks the price of gold relative to the index level of the Dow. 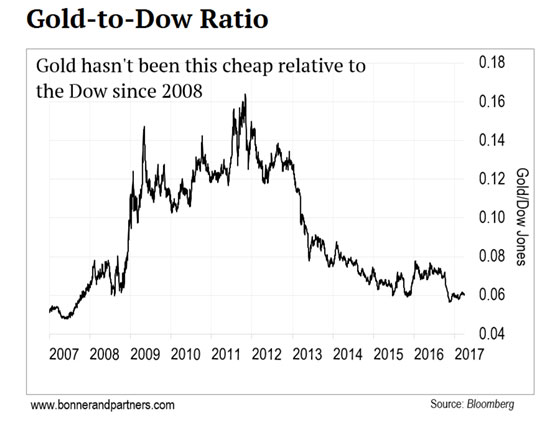 Since then, the ratio has been falling – meaning gold has been getting cheaper relative to the Dow.

It’s left gold at its cheapest level relative to the Dow since 2008.

On a cold, dark night not long ago, this 68-year-old rancher’s pregnant daughter and her husband were prisoners in their own home… as an enraged mob tore through the streets of their neighborhood.

Doors were kicked in. Stores were looted. Buildings were set on fire.

Today, this rancher (also a founder of an underground news and research network) is releasing some unsettling facts about the recent wave of unrest we’ve been seeing in America.

Click here to see his message and reserve a copy of his guide. 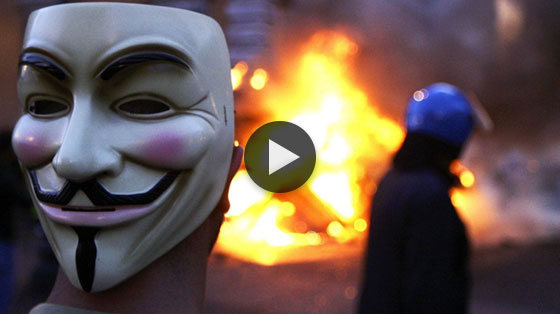