The gold sector is on the verge of generating its first sell signal since 2016.

Gold stocks have had an amazing run higher over the past few months. The sector has been much stronger than I anticipated. And the current rally has lasted much longer than I thought it would.

But the gold sector remains vulnerable to a sharp and swift pullback. And even though my mom isn’t talking to me these days because I talked her out of buying gold stocks last month, my advice to her would still be the same today…

You’ll have a better opportunity to buy gold stocks at lower prices in the weeks and months ahead. One of my favorite gold-stock timing indicators is on the verge of a sell signal. 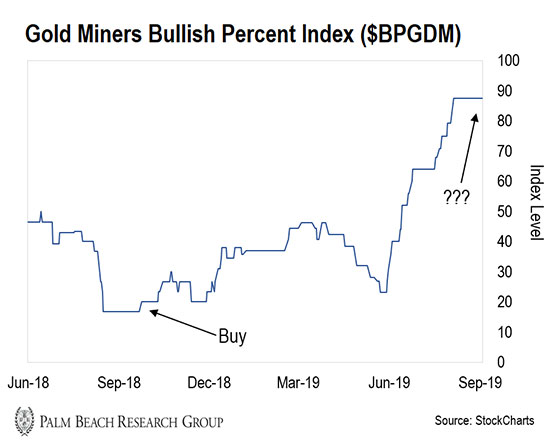 Typically, a sector is extremely overbought when its bullish percent index rallies above 80. It’s extremely oversold when it drops below 20. Trading signals get triggered when the index reaches extreme levels and then reverses.

For example, last September, $BPGDM turned higher from a deeply oversold reading of 13. That action triggered a “buy” signal. At the time, the VanEck Vectors Gold Miners Fund (GDX) was trading for a little less than $19 per share. On Tuesday, GDX closed around $30.50.

It took a while to get going, but that turned out to be one heck of a buy signal.

The $BPGDM is trading above 87. That indicates an extremely overbought condition.

It hasn’t turned lower. So we don’t yet have a “sell” signal. But the gold sector is clearly overbought. And with GDX trading nearly 50% higher than where it started the year, now is probably not a good time to be buying into the sector.

The last time we got a $BPGDM sell signal was back in August 2016. That happens to be the last time the Commercial Trader net-short interest was over 330,000 contracts. That was also the last time GDX was trading above $30 per share.

Now, I’m not saying we’re headed for the same sort of decline this time around. I’m just suggesting that right now is probably not the best time to be putting new money to work in the gold sector. We’ll likely have a better chance to do so in the months ahead.

P.S. The way things are going in the U.S. economy right now, gold could eventually hit $5,000 an ounce. Some folks even predict $10,000 an ounce. But one thing’s for certain: Like anything else in the market, it won’t be a smooth ride. There’ll be a lot of very large dips and bumps along the way.

So I’m finally stepping forward to share my gold trading technique after 38 years. In June alone, you could’ve made a 269% gain in 26 days on my gold recommendations.

And to find out how you could potentially double and triple your money—without ever touching any conventional investment—check out my special presentation right here.

From Chris C.: I want to know when Teeka thinks the “Second Boom” in cryptos will happen. Cryptos look very weak right now. And in some ways, it looks like it’ll take many years for the market to get back to its highs (if they ever do).

Chaka’s Reply:  Thanks for your question, Chris. On September 18, Teeka will reveal a little-known crypto phenomenon that he believes will boost the entire market in the coming months.

Now, Teeka continues to travel abroad to meet his network of insiders as he completes his research on this event. But once he’s finished, he’ll go live and tell the world what this phenomenon is.

You can register here for Teeka’s free event right here. And when you reserve your spot, you’ll even learn how to get the name of his new No. 1 crypto pick.

Gold is one of the best long-term investments in the world right now.

If you’re like most people, you may have already bought gold stocks… bullion… or some other gold investment. If so, you’ll probably do quite well.

But in this video, I’m going to share a much different way to make money on gold. Gains of up to 5 or 10 times MORE…

…in a fraction of the time…

…no matter what happens to the price of gold along the way. 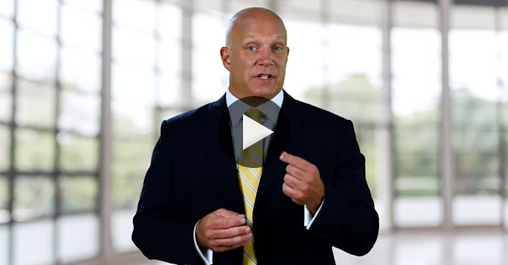 This editorial email containing advertisements was sent to %%emailaddr%% because you subscribed to this service. To stop receiving these emails, click here.

Palm Beach Research Group welcomes your feedback and questions. But please note: The law prohibits us from giving personalized advice.