Nick’s Note: At the Daily, we’re fans of gold… One of our favorite ways to get exposure to gold is through gold mining companies. Below, colleague Jeff Clark tells us why he thinks gold stocks are going higher over the next couple weeks…

The gold stock rally is hanging on by a thread.

But—and this is the important thing—it is still hanging on.

We still have about two weeks left in the seasonally strong period for gold stocks. That period started in mid-December and it runs until mid-February.

The gold sector has done an admirable job of sneaking higher over the past six weeks.

But the rally has been stalling of late.

So, it might be worthwhile to take another look at the sector and see if anything has changed. Here’s an updated look at the chart of the VanEck Vectors Gold Miners ETF (the thin-blue line is the 9-day exponential moving average—EMA)… 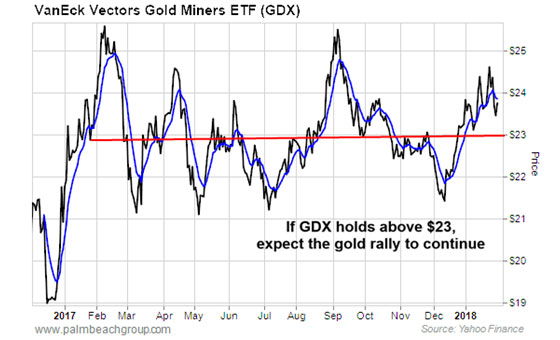 GDX bottomed in mid-December 2017, just like it did in 2016. Then it rallied sharply heading into January, just like in 2016. GDX then spent most of January grinding slowly higher and forming a pattern of higher highs and higher lows on the chart. It ended the month on a low note, closing just below its 9-day EMA—just like it did last year.

If the current gold stock rally continues to play out like the rally last year, then the next two weeks could be explosive for gold stocks.

GDX rallied nearly 8% in early February last year. A similar move this time around would have GDX trading as high as $25.50 by Valentine’s Day.

There are no guarantees, of course. Just because GDX is currently playing out the same script as it did this time last year doesn’t mean it will continue to do so.

But as long as GDX can hold above January’s low of $23 per share (on a closing basis), I like the odds.

If GDX closes below $23, then the pattern is broken. And the gold stock rally will probably be over. For now, though, the gold sector still looks good for the next two weeks.

P.S. If you’d like to receive my free daily market insights in the Market Minute, click here and I’ll automatically add you to my list. You’ll also receive a link to my “Guide to Options Trading” just for signing up. This free report will teach you how to trade options the right way… and dramatically boost your overall returns.

In his January 31 update, Palm Beach Confidential editor Teeka Tiwari asked his subscribers how they “disconnect” from volatility in the crypto space (subscribers can watch the video right here). The response was overwhelming…

From Nelson W.: I’ve been accumulating and holding bitcoin for longer than I care to admit. For nearly all of 2017, I obsessed almost every hour about the market.

These last few large pullbacks have taught me to not obsess over volatility. And yes, I’ll do as Teeka advised and make time for truly joyful things more often.

My most joyous moments are: hugging my identical twin girls and going surfing.

From Arthur Z.: Teeka asked what’s our favorite way of disconnecting from the markets… Easy: sensible asset allocation, position-sizing… and lots of travel!

I got into cryptocurrencies in November 2017, and put $15,000 into bitcoin (under 1% of my net worth, thankfully). Then I put about $500 in every recommended position that has come under its buy price. I think I’m up about 2x despite the doom and gloom.

From Doug V.: Well, it’s just a thrill a minute with this stuff, isn’t it?

Actually, I slept quite well last night. How? I’ve taken many early harvests (“skimmed cream off the top”). And best of all, I’ve seen enough of cryptos to know that they could double in a week, and I sincerely believe they will.

From Jordan R.: As a professional acrobat, I disconnect from the volatility by hitting Muscle Beach in L.A. and performing circus acts with friends.

From Dale M.: I fish the Klamath River to disconnect from the crypto markets. I believe it may be impossible to think about anything other than the possibility of catching a beautiful rainbow trout while bouncing a brown rooster tail down the river.

I admit I think about cryptos a lot since it has become “life-changing” for me. But when I’m down in the canyon, it all goes away… and I always come back to reality refreshed.

From Albert G.: I weather the cryptocurrency volatility by ignoring the noise and waiting for my next Palm Beach Confidential update. Thank you for allowing me to keep the proper perspective.

From Dennis P.: Big T, as an investor of 40 years, the crypto market volatility does not faze me. I’m in it with you for the long haul. By adhering to your “Let the Game Come to You!” philosophy, I’ve used the pullbacks to buy on the dips. I’ve been able to get into nearly all the long-term and short-term plays. I’m also disciplined in not exceeding the buy-up-to prices.

From Jerry W.: You tell me what to buy, at what price, and when to sell. That’s all I need to know.

Cryptos are speculations. It can be the ride of your life if you can just turn off your computer until Teeka tells you to turn it on again.

If you CAN’T STAND THE HEAT, GET OUT OF THE KITCHEN!

Love what you do, Big T… and respect your commitment to helping me with my retirement.

If you want to tell Teeka your story, click here…

On February 8 at 8 p.m. ET, the Legends of Finance Summit will have its World Premiere.

The story behind that name is simple—because renowned contrarian Bill Bonner will join legendary speculator Doug Casey for their first-ever online Summit.

They will reveal the entire story behind Bill Bonner’s audacious “Trade of the Century.”

That’s why this premiere is the biggest—and most anticipated—in the history of our research firm. Space is filling up… So reserve your free seat today… 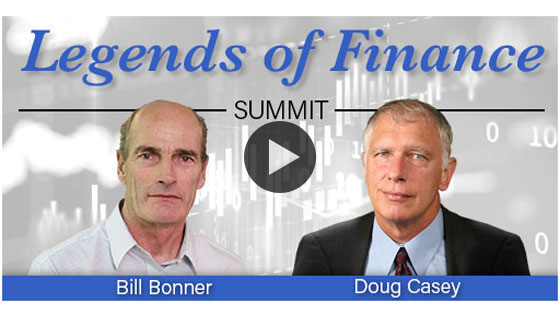