In July 2019, I told my Daily readers that gold was headed for a breakout…

Under a specific condition, gold transforms from a stodgy performance killer to a rocket ship of fabulous wealth creation.

I’m telling you about this today because last week, the exact condition that preceded gold’s 12%, 14%, and 24% runs triggered again.

At the time, gold was trading around $1,400… So if you’d just bought gold then and held it, you’d be up nearly 40%. Today, I’m going to tell you why I think there could be much more upside ahead for gold.

Now, most of you know I’m no gold bug.

Sure, as a hedge against the world’s fiat system collapsing, gold makes sense. That’s why we recommend holding up to a 5% allocation of precious metals.

If the world really does go to hell in a handbasket, that 5% allocation could end up becoming more valuable than the other 95% of your investment assets.

That’s the power of gold during a crisis. But outside of a societal meltdown, does it still make sense to own gold?

The answer is yes – but only under certain conditions like I outlined in July 2019.

And the same conditions I saw then are lining up again. And they will push gold to record highs…

The Countdown on Gold’s Rally Has Started

In July 2019, I said this trigger that would ignite the next gold rally has to do with something called “negative real rates.”

The real rate is the interest rate return you receive on the 10-year government bond minus the current inflation rate. And in August 2019, real rates dipped into negative territory.

Now, why are negative rates good for gold? It has to do with something called “opportunity cost.”

Gold pays no interest. So if you buy gold instead of bonds, you forgo the interest you would’ve received on the bonds.

It causes institutions and even central banks to make changes in the mix of assets they hold. They start overweighting gold in their respective portfolios.

This rotation of capital can spark massive moves higher in gold prices. Which explains why we’ve seen central bank gold-buying at a 50-year high… and why we’ve seen investing luminaries such as Paul Tudor Jones, David Einhorn, and George Soros all get long gold.

As you can see in the chart below, while real rates have declined (green line), gold prices (black line) have zoomed higher. 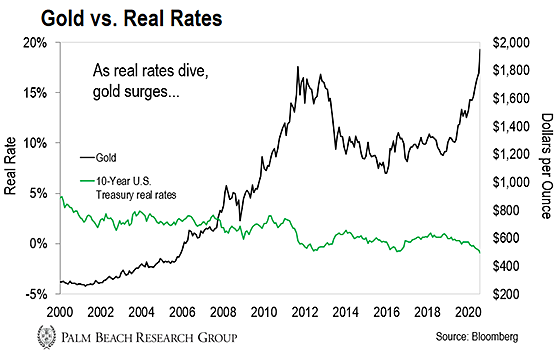 Now, real rates have been bouncing between negative and flat. But recently, real rates went to -0.92. This sharp move down in real rates means gold prices will rocket higher.

Here’s why we think that’s about to happen…

The unprecedented collapse of the global economy due to this coronavirus pandemic calls for an unprecedented solution. Which is why the whole world is embarking on a money-printing odyssey no one has ever seen before.

According to global research firm Capital Economics, the Fed’s balance sheet alone could swell to as much as $10 trillion over the next few months. And other central banks are spending trillions to help their economies, too.

This massive infusion of “printed” money will create inflation. If interest rates don’t rise as inflation rises, real rates will go negative again. There’s no way around it.

And faced with losing 1–2% per year holding government bonds… pension funds, central banks, and professional investors of every ilk will go full-tilt into gold.

Under this scenario, gold could easily trade at $2,500 per ounce. And this price action will ignite a gold stock rally unlike anything we’ve seen since the early 2000s.

In fact, I believe we could see gold run even higher this time. Based on my research, gold could reach $15,000 from today’s prices, if real rates continue to fall.

So how do we play it?

In fact, my three favorite gold stock ideas are up an average of nearly 80% since I recommended them on April 2 in my flagship Palm Beach Letter service. Meanwhile, gold is up 20% over that span.

(Paid-up subscribers can read the issue here. If you’re not a subscriber, you can learn more here.)

These are stocks I would’ve bought for myself. But my publisher’s policy prevents me from owning stocks I recommend to you.

And based on how high I believe these ideas can go, I calculate I’m giving up about $3 million in potential profits by not buying them.

So instead of buying my three favorite gold stocks, I’ve made the decision to buy SPDR Gold Shares (GLD) for my own account. I think I’ll at least double my money over the next 18 months.

P.S. Gold isn’t the only asset I believe will soar as real rates go negative. I also believe it will be a huge tailwind for crypto assets like bitcoin.

But unlike gold, bitcoin’s underlying blockchain technology is much more than a hedge against inflation. It’s poised to disrupt multiple industries, from finance to national security.

In fact, I’m calling blockchain tech my No. 1 investment of the decade.