For the past week, I’ve been preparing you for a supply shock like none we’ve ever seen before…

A shock that’s creating a limited opportunity for those who know how to connect the dots and set themselves up early for life-changing gains.

The chip shortage we’re seeing right now… The housing shortage… The new car shortage. None of these saw their supply cut by more than 35%.

Now, we’re about to witness something much bigger in the crypto market. A nearly 100% supply cut.

Today, I’ll tell you about this supply shock… what it means to you… and explain a new source of demand that will reduce the number of new bitcoin coming to market to zero…

These two catalysts will combine to create what I call the “Final Halving.”

There will never be more than 21 million bitcoin in existence. That issuance is strictly regulated by computer code.

The U.S. Federal Reserve can print as many dollars as it likes, and mining and fracking can produce more gold and oil… but the number of bitcoin will never exceed 21 million.

This pre-set scarcity (along with bitcoin’s security features) is why the crypto has wildly outpaced other investments over the past decade.

Smart people realize it’s one of the best ways to protect – and actually increase – their purchasing power in the face of rampant money-printing and rising inflation.

But bitcoin’s code contains another feature that’s both anti-inflationary and deflationary… So over time, fewer and fewer new bitcoin will be minted.

This deflationary feature in bitcoin’s code is called a “halving.” That’s when the supply of new bitcoin is cut in half, once every four years.

There are still 29 more halvings left before new bitcoin will cease being produced.

The real “Final Halving” is coming in 2022. And it’s going to make these scheduled halvings irrelevant.

Since bitcoin’s inception, it’s been plagued with negative connotations to the drug market, gunrunning, and money laundering.

That made it taboo for the gatekeepers of traditional finance to touch.

Think about it. For years, the mainstream hated bitcoin. They labeled it a scam. The last thing a big, respectable bank wanted to do was loan money to bitcoin miners.

So, if you were a bitcoin miner and didn’t have access to traditional sources of capital… you were forced to sell your bitcoin to fund operations.

But today, just about every big bank is getting into crypto. Morgan Stanley, Goldman Sachs, JPMorgan… you name it.

That means the miners can raise all the money they need through the capital markets (equity or debt).

When I saw this, I realized we’d entered a new phase in this market. Miners will start tapping the public markets for capital. And they’ll never have to sell bitcoin again.

You can see it clearly on this chart. 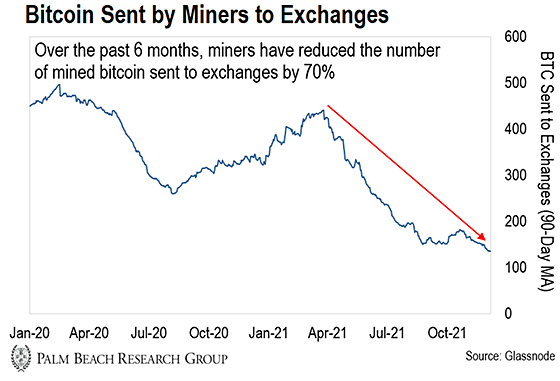 Over the second half of the year, miners have rapidly reduced the number of mined bitcoin they’re transferring to exchanges. Previously, mining companies would make these transfers to sell mined bitcoin.

But it’s clear they’re not making these moves at the same levels anymore. That figure has gone down by 70% over the past six months.

Miners are currently transferring around 150 bitcoin per day…

So over 83% of the bitcoin miners earn every day is being kept off exchanges and unavailable for anyone – any investor, institution, or fund – to purchase.

Soon, there will be no more new bitcoin available to the public. This is why I call these “secret” halvings. Nobody’s factored bitcoin hoarding into their models.

Based on the latest hoarding data, we forecast the miners alone to cause a 98.2% drop in new bitcoin hitting the market per day by next year.

That brings the newly available bitcoin from 900 each day all the way down to 16.

But to be a true Final Halving, we need to see a 100% drop. What about the remaining 16? That brings me to the second part of this explosive setup…

Remember, halvings have two sides – a supply side and a demand side.

And we’re about to see an unprecedented demand shock from another area no one is talking about: Credit cards.

This is a huge source of demand no one is accounting for in their bitcoin price models… Demand that will eat up the remaining bitcoin supply like nothing before.

Let’s be ultra-conservative and say just 1% of credit card transactions involve a 2% bitcoin reward. Based on these estimates, you’re looking at up to 276 bitcoin in new demand per day by next year.

Now can you see why all future halvings are obsolete?

If the credit cards keep up their rapid adoption, our numbers show they could eat up the remaining supply in as little as two months…

That’s why I call this the Final Halving.

Because we’re talking about an unprecedented surge in demand coming together with an extreme supply shock to deliver more than a century’s worth of halvings at once.

Friends, please don’t wait. You need to get ahead of this Final Halving before it unfolds. Before Wall Street analysts wrap their heads around this demand and the coming 98.2% supply shock.

Forget computer chips. Forget soaring housing costs. This will be unlike anything you or I have ever seen before.

We’re talking about more than a century’s worth of halvings in less than one year. And when bitcoin eventually hits $500,000, we’ll be able to trace it back to the Final Halving.

You should absolutely buy some bitcoin today… But if that’s all you buy, you’re potentially leaving millions of dollars on the table. The reason is very simple…

Whenever there’s a supply crunch, it sends large assets (like bitcoin) surging… But it sends smaller related assets even higher.

That’s why earlier this week, I pulled back the curtain on six small ideas tied to bitcoin’s Final Halving.

I gave the whole story on this once-in-a-lifetime event… and discussed six tiny tokens that will slingshot higher from this catalyst.

So, while bitcoin could rise 10x from here, these tokens could soar an order of magnitude higher. It’s almost like having 50-1 leverage.

That’s how high these investments could rise.

That’s why I’m pounding the table and coming to you today to get in on my six picks before the Final Halving triggers in 2022.

Forget what you think you know about halving events. 2021 could be the last year anyone is ever able to buy a newly minted bitcoin because come 2022 the miners will keep them all to themselves.

The time to act is now, before the rest of the world wakes up to bitcoin’s Final Halving.