After 30 years of farming, David Radenberg had a decision to make…

“Do I go work at Walmart as a greeter or as a parts man at the mechanic shop?”

Radenberg has sowed wheat on his family’s 2,400-acre farm in Claflin, Kansas, for three decades. This year’s crop could be his last.

You see, grain prices are low. And those low prices may force David to sell the family farm.

Today, there’s a record amount of excess grains on the market. In fact, there’s so much grain, some farmers have no place to store it.

Iowa farmer Karl Fox said storage bins at his property are so full that he piles excess corn on the ground and covers it with a tarp.

Per the U.S. Department of Agriculture (USDA), global inventory of corn, wheat, rice, and soybeans combined will hit a record 740 million tons going into the next harvest…

The oversupply of grains is pushing down prices… And falling prices are forcing small family farmers like Radenberg and Fox out of the market.

For most investors, this may seem like a bad time to buy grains. But at the Daily, we’re not most investors. When the herd goes one way, we go the other…

You see, the oversupply of grains is nearing its peak.

As the glut shakes out family farmers, supply will eventually tighten. That will lead to an undersupplied grains market. I think that will happen before the end of next year.

Prices push higher when there is an undersupply of grains. It’s a cycle that repeats time after time…

The last two times grain stockpiles were so large, the index that tracks grains spiked 80% and 118%—just over a year later.

Over the past 15 years, the grains market has been oversupplied three times. Each time that’s happened, producers left the market and supply quickly shrank.

That sent prices up…

To find the tipping point in the grain supply chain, I like to look at the grain “stocks-to-use” (S/U) ratio and the Bloomberg Grains Subindex.

The grain S/U ratio is a measure of supply and demand. It’s a complicated mathematical formula, so I won’t delve into details.

When the grain S/U ratio (black line) is above 20 and starts to turn down, grain prices generally rise (the blue line). You can see that in the chart below… 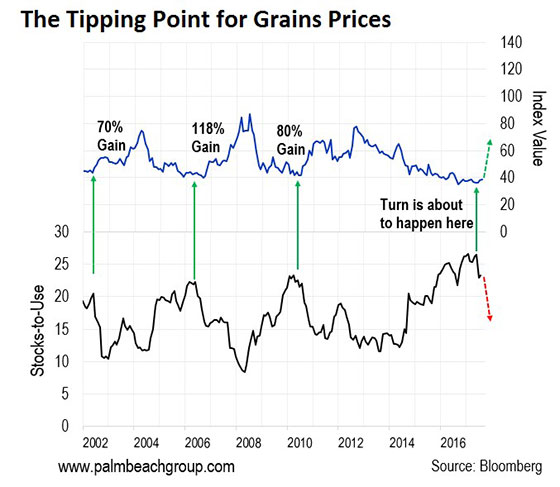 As you can see in the chart, the ratio is about to turn again…

Today, we’re seeing the most oversupplied grains markets in over 20 years. But this is about to change…

Farmers like Radenberg are leaving the market… and as they leave, supply will shrink.

It’s happened three times since 2000. Each time, prices soared. And I expect it to happen again over the next year.

This is a perfect example of a busted market getting ready to turn around.

There are several ways to play this trend. You can start by researching wheat-focused exchange-traded funds (ETFs), seed companies, or fertilizer companies.

P.S. The grain market is about to move from oversupplied to undersupplied… But that’s not the only reason prices are going up. On Monday, I’ll show you why demand is going up, too…

Historic Legislation: On July 21, Delaware Gov. John Carney Jr. signed into law a bill that makes it legal for companies incorporated in that state to use the blockchain for stock trading and recordkeeping. Advocates of the law say it’s “historic.” That’s because it allows issuance, redemption, and trading on the distributed ledger. This is the latest example of the blockchain moving from “theory” to “practice.”

Government Blessing: Meanwhile, on July 24, the U.S. Commodity Futures Trading Commission (CFTC) gave further approval to the LedgerX bitcoin trading platform. With approval, the company is now the first to be allowed to trade bitcoin derivatives like options. The blessing from the CFTC will open the bitcoin marketplace to institutional-level investors like hedge funds. Teeka Tiwari discussed this in his latest Palm Beach Confidential update. Subscribers can watch the video here.

Cryptocurrencies Catching on in Africa: Per cryptocurrency-tracking website Coin.dance, bitcoin use is surging in Nigeria and Tanzania. Bitcoin trading in Nigeria hit a record high of $3 million in July. And in Tanzania, trading has skyrocketed to over 83 billion Tanzanian shillings. That’s up from between 10,000 and 20,000 shillings in previous months. This suggests that Africa is embracing bitcoin as a useful form of currency.

Our friends over at Agora Financial have just released a BRAND-NEW investment strategy designed to make you more than 10x your money… with regular stocks… in UNDER 24 hours. Click here or the image below to see their free presentation. 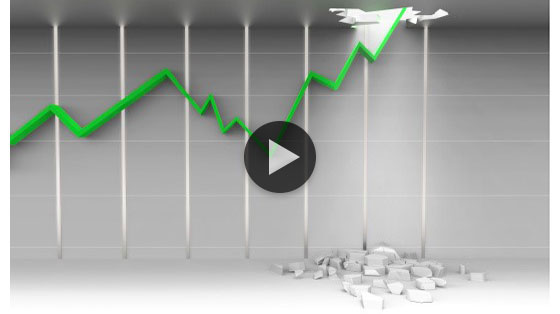