Editor’s Note: Gold shot up 5% in January, its biggest gain since June 2016. Is this a rally or just a head fake? Longtime Daily readers know whenever we want to “deep dive” into gold, we turn to our friends at Casey Research. No other research group knows more about successful natural resources speculation…

What would you say if I told you of an investment strategy that more than doubled your money within two years, 94% of the time?

I’m about to tell you something that’s rather obvious. The phenomenon is well known.

Despite that, I never did the math before. To my knowledge, no one has ever bothered, but that’s no excuse.

So, while I knew it was a factor—I’ve even made recommendations to profit from it—I didn’t realize just how powerful this approach is at generating maximum gains for minimum risk.

Albert Einstein was famous for urging us to question everything. He once said, “I have no special talents. I am only passionately curious.”

The strategy I’m about to describe has been “hiding in plain sight.” Doug Casey told me about it when I first started working for Casey Research. But I never asked: “What’s the average gain?”

Below is a chart showing share price gains of a junior resource stock as the company makes a discovery, slumps into the “boring engineering phase,” and then ramps up to production. 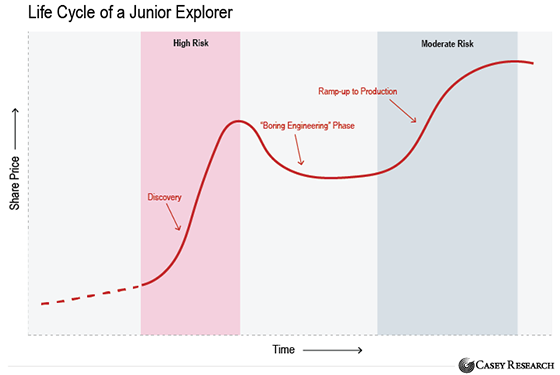 When we created this cartoon, I asked the artist to draw it like this, with the biggest gains during the discovery period.

That’s what I was taught, and it’s true: The biggest, most rapid gains usually result from a big discovery. This is the stuff 10-baggers, and even 100-baggers, are made of.

What I never asked before was how big the average gain was for companies that come out of the phase of engineering studies and start building their mines.

The rising line in that grey area to the right side of the chart labeled “Moderate Risk”—that’s just an “artist’s conception.” It’s not based on any math. If anything, I’m ashamed to say, it was based on my preconceptions.

I mean, I knew it was good. I’ve made many recommendations in International Speculator because a company was going to build a mine.

While the increase in share price as a company approaches production might not be as large as during a discovery, it’s more reliable. But frankly, I had no idea how good it can be.

Not until I finally asked the question last month, and saw initial results that shocked me.

Casey researchers Laurynas Vegys and Konstantin Ogurchenkov scoured public records for junior gold companies that have tried to go from exploration to production since 2001. Of the 49 companies we found, 46 succeeded in building their mines.

The average gain these companies yielded between announcing their decisions to build and pouring their first bars of gold was 133%. This includes companies that built their mines while the price of gold was falling.

Sure, 133% gains aren’t in the same league as 10-baggers—but the odds of a randomly selected explorer delivering 10-bagger results are less than 1%.

There are thousands of mining companies out there, with more coming and going every year. The random odds of picking a 10-bagger among them might even be less than 0.01%.

But the random odds of more than doubling your money on a gold explorer as it turns into a producer are more than 94%.

So, we can say that the potential gains from a random bet on a gold mine being built are about 10 times less than betting on a discovery—but the odds are 100 times better. Probably several hundred times better.

Best of all, we can optimize this.

We don’t make random selections in International Speculator, but even with the best of people, methods, and intentions, no one can reliably predict a discovery.

No one. Not me. Not Doug Casey. Not even our “Explorers’ League” honorees. Their odds may be better than anyone else’s, but they remain unknown. Unknowable.

In contrast, we can see who is building a mine. There’s no prediction in that at all. A public company that builds a mine must disclose it. There’s usually a press release. And if we have better than 94% chances of succeeding by choosing among the companies at random, how much better can we do by choosing the ones with the best projects?

The average of the five best-performing companies in our sample was 695%.

Now, I won’t claim that I’ll be able to pick the top five mine builders of the next 15 years… but I think we can do better than the random average of 133% returns. Anywhere between 133% and 695% with a 94% success rate would make for one heck of a return.

Editor’s Note: Recently, Louis visited a massive deposit in Western Canada called the “Red Gold” mine. The mine is 17 times richer than the average gold mine… and it’s worth an estimated $9 billion. That’s more than the Australian government has in its possession.

This gold mine will go “online” in the next few months, which could push up the stock price of this company quickly and return investors 1,000% or more in the long term. But hurry. Time is running out… You can find out more about this discovery here…

Next up: Energy companies.

PBL editor Teeka “Big T” Tiwari has been at the forefront of this trend. Just last week, Big T returned from the Blockchain Expo in London. And he says there’s a mad dash of industries rushing into blockchain technology.

The latest is a major utility company. It’s using blockchain technology to allow you to recharge electric vehicles at a fueling station—without even leaving your car.

In today’s must-see 3-Minute Market Minder (transcript here), Big T reveals who this company is and how its technology will work. 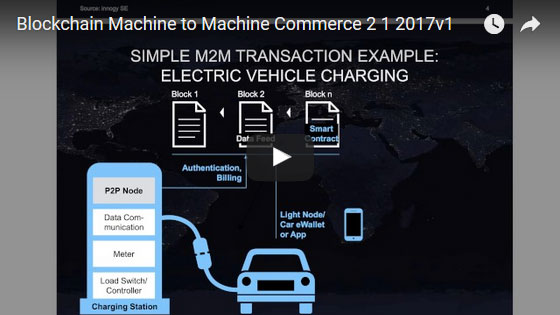