“It’s not worth the ink it’s printed on, really.”

That was the recent feedback in our office on an essay where I noted that bitcoin could hit $500,000 or even $1 million per coin…

In a bull market, nobody bats an eye at a bold claim like bitcoin hitting $1 million.

But in a bear market? That’s when you get called crazy.

So, in today’s essay, let’s break down three key reasons why I think bitcoin can hit six figures in the years ahead… And why you should be dollar-cost-averaging in the current Crypto Winter.

We’re still seeing the impact of crypto platform FTX’s implosion. Many smaller exchanges like AAX and BlockFi have also frozen up, and uncertainty still reigns.

Data from Coinglass shows that even as centralized crypto exchanges have frozen up or gone bankrupt, investors have moved their bitcoin off exchanges in droves. 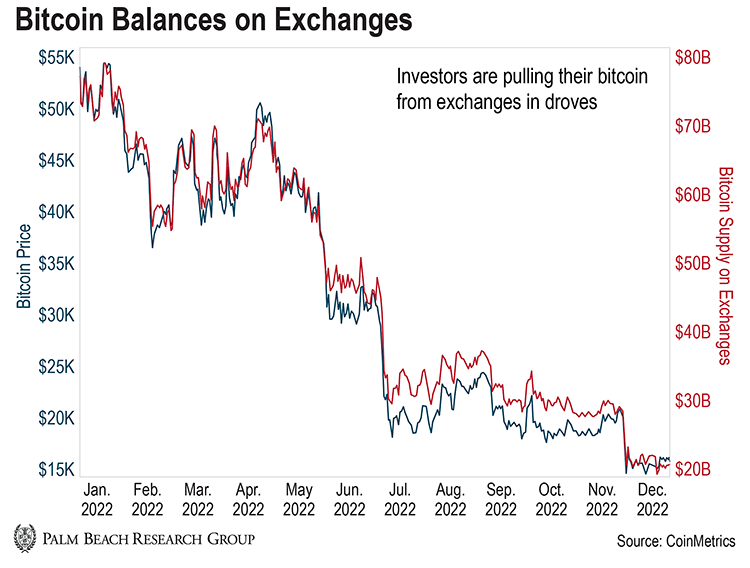 From this data, it may look like investors are headed for the hills.

After all, investors didn’t stop investing in stocks in 2008 following the bankruptcy of Lehman Brothers or Bear Stearns. Instead, stronger financial institutions picked up the pieces.

Sure, the native token prices for these decentralized prices are down with the overall pullback in the crypto market.

But once these DEXs prove their stability and legitimacy, that fear will subside, and their prices will rise again…

Just like stock prices rose in 2009 when no other brokerage firms went belly-up.

As the top crypto, bitcoin will lead the way up…

Since it’s decentralized, you can’t tamper with or alter the bitcoin code. That makes it essentially immutable, unlike centralized crypto exchanges like FTX that are subject to human greed… And that will prove a key factor for bitcoin’s steady, higher returns.

Since bitcoin runs on a transparent, decentralized blockchain, anyone can see the health of its network at any time…

For the U.S. alone, bitcoin users have risen from about 8% of the population in 2019 to over 23% at the end of last year… with estimates of about 25% this year.

While that’s a bit of a slowdown, the big jump over the past few years still leaves about 75% of the population available for future growth.

The second key data metric is bitcoin’s “hash rate.” This shows the computational power needed to determine the security and mining difficulty for new bitcoin.

And although the price of bitcoin has fallen more than 75% in 2022, its hash rate has been setting record highs in 2022.

This shows that users are continuing to mine for bitcoin… And that network strength remains robust.

It also indicates that bitcoin’s price will likely rise once the current market fears subside.

As an early-stage asset class, its returns fluctuate wildly… But if it can successfully rival gold as a reserve asset in a fiat world, BTC can ultimately be worth hundreds of thousands of dollars.

And if bitcoin grew to be worth just 5% of global assets, each coin would be worth over $2 million… That’s even more bullish than we expect by 2030, but not unreasonable.

In a world where governments print money at will, the fixed supply of bitcoin means its price will continue to rise in the long term.

Can we predict an exact valuation? Or an exact year? Probably not.

Much like trying to value the price of gold, there’s no underlying business or cash flow to analyze.

So when it comes to valuing cryptocurrencies, we must look at other trends.

Bitcoin hasn’t been around long. But it has shown a four-year cycle.

Right now, we’re in the middle of the winter part of that cycle. Things look grim. And that likely won’t begin to change until the next halving in early 2024.

But as we saw in the last Crypto Winter, investors who buy in those winter months are more than fairly rewarded for their patience.

So patience is a virtue that’s still rewarding to long-term investors… The downward moves might be bigger, but the wins will be, too.

Bottom line: Crypto is down right now for a number of reasons.

But it’s not “crazy” to see that bitcoin can recover from the current market mayhem and thrive in the years ahead.

Investors are still embracing the bitcoin network. And those who start buying now can reap the rewards in the next bull market.