Nick’s Note: In our search for money-making opportunities, we’re always looking to protect our downside. That’s why at the Daily, we always stress the importance of risk management. Whether it’s cryptocurrencies, stocks, or commodities, you should never invest more than you can lose.

Today, we hand it off to master trader and longtime PBRG friend Jeff Clark. Jeff learned the hard way that you shouldn’t put too much money into any one idea. But the lesson allowed him to retire by age 42…

I was only 19 years old when I made my first options trade.

My next trade was in IBM. I bought 10 calls for $1. This time, it took a couple days to double my money. Next, I bought Digital Equipment put options… which nearly tripled in just a few days.

I made 17 trades during my first six weeks as a trader. Every single one was a winner.

Going 17 for 17 was a remarkable feat for a rookie trader—especially since I wasn’t using any sort of fundamental or technical analysis. I was just going with my gut.

And then I decided it was time to get serious. No more tiny trades. I was too good for the small stuff. For whatever reason, I had figured out a way to beat the market.

You can probably guess what happened next.

The stock market has a habit of humbling folks who think they’ve figured it out. For me, the humbling started right away.

At first, the positions started slightly moving against me. It was nothing to be concerned about. One good day would put everything back in the profit column.

But then, one by one, each position blew up on me. It was too painful to watch. I kept the television off and avoided reading the newspaper for fear I’d see something bad about the stock market and my positions.

When I finally got up enough courage to call the branch manager and check on the status of my account, I learned all the gains I had built up over the previous six weeks were gone.

“Just sell everything,” I said.

That was an expensive lesson to learn. But it’s one every options trader learns at some point. I was just fortunate it happened to me early in my career.

You see, that experience changed how I looked at trading. Instead of using options as vehicles for speculation—a way to juice my returns and get more bang for my buck—I started using them the way they were intended to be used: as a way to reduce risk.

That’s a huge difference. It has allowed me to trade options successfully for nearly three decades. And it allowed me to retire at 42.

P.S. Like any honest trader will admit, this is far from the only horror story that’s occurred over my career. But my favorite story, which started out just as scary… ended quite differently.

You see, I’d learned from my previous mistakes… and turned what was almost a devastating loss into one of the biggest wins of my career. Click here to hear all about it.

Last month, world-renowned cryptocurrency expert Teeka Tiwari made the boldest prediction of his career during a live broadcast from Glenn Beck’s Dallas studios: Bitcoin is going over $65,000.

It was the largest event in our firm’s history, with nearly 50,000 people tuning in. As you can imagine, we were overwhelmed with questions—more than 16,000 from across the world.

Due to the demand, Teeka has agreed to do a live follow-up Q&A briefing on August 8 at 8 p.m. ET. 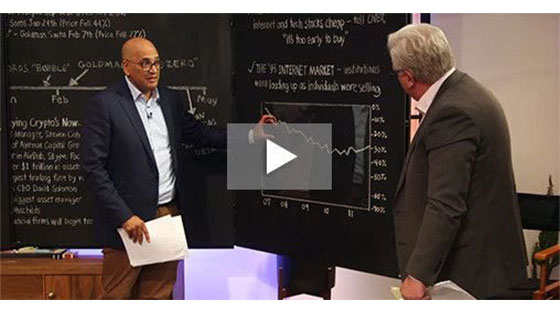