Michael Cheng just bought a road. But not just any road.

He bought Presidio Terrace (and its sidewalks) in San Francisco.

If you live in San Francisco, you know that this circular block is one of the most exclusive neighborhoods in the city.

Sen. Dianne Feinstein, Rep. Nancy Pelosi, and a former city mayor have all lived there. The community has 35 multimillion-dollar homes. 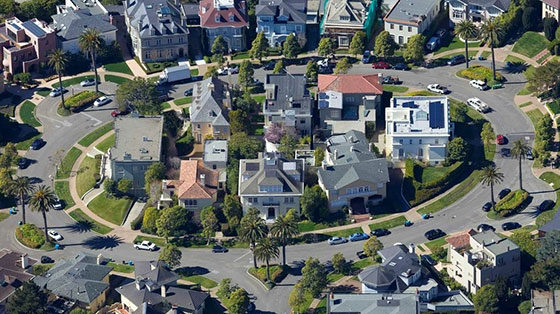 An aerial view of Presidio Terrace

In San Francisco, the owners of private roads must pay property taxes on them.

The tax on Presidio Terrace was just $14 per year. But for years, the community did not pay the tax. Residents say the community never received the bills.

For whatever reason, the bill didn’t get paid. And the city put a tax lien on the street.

Cheng bought the lien in 2015 at an auction for $90,100. And he’s now looking for ways to monetize it… much to the chagrin of residents.

Cheng made a wise investment when he bought the lien at auction. In fact, this little-known investment strategy is one of our favorites at the Daily.

An Alternative Way to Invest in Property

Cheng isn’t just a dope off the street who got lucky.

He’s a professional real estate investor. And he’s done his research. That’s why he bought the tax lien on Presidio Terrace.

If you own a house, you know that every year you’ll get a tax notice… Even worse than receiving the notice is writing out a check to pay it.

If you don’t pay the taxes, you’ll go into arrears. And the county where you reside can put a lien on your property.

Both types of auctions can be lucrative for investors.

Some people prefer to buy properties outright. But if you don’t want to change light bulbs and clean toilets, buying a tax lien certificate might be the better option.

Counties sell tax lien certificates to investors to recoup property taxes. In exchange for paying a property’s back taxes, counties give investors returns guaranteed by state statute and backed by collateral (the property).

And what are these guaranteed returns?

Best of all, anyone can buy these certificates. You just need to have the cash to pay for them.

Big gains like these are possible. You just need to find good deals—like Michael Cheng did—and wait for the money to come in.

There are 3,144 counties in America. Each one is its own market, open for investors—some with thousands of properties up for auction. So deals are out there to be had.

If you’re looking for extra income, tax lien certificates are a great place to start.

This Company Is Thriving on Geopolitical Uncertainty

Crisis is good for defense contractors…

Just look at Raytheon (RTN). The company makes a wide array of weapons. And it has one of the best cybersecurity teams in the world.

With the United States in a potential nuclear showdown with North Korea, the system is being deployed in South Korea.

And as you can see in the chart below, the geopolitical uncertainty is boosting Raytheon’s stock. 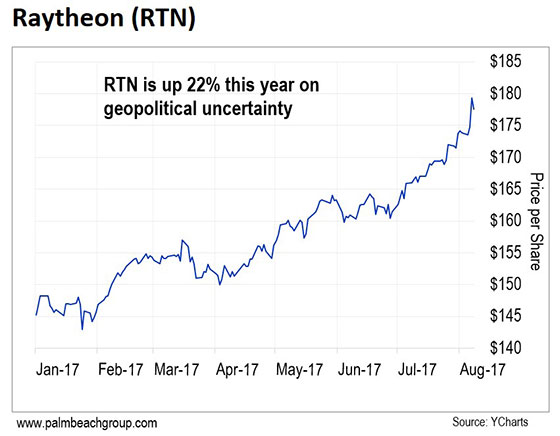 Raytheon is up 22% this year. And it will continue to climb higher as long as the U.S. is involved in foreign entanglements.

Now, in a private sit-down, he’ll reveal how you can beat the market 10 times over. Click here to find out why they call him “America’s top trader”… 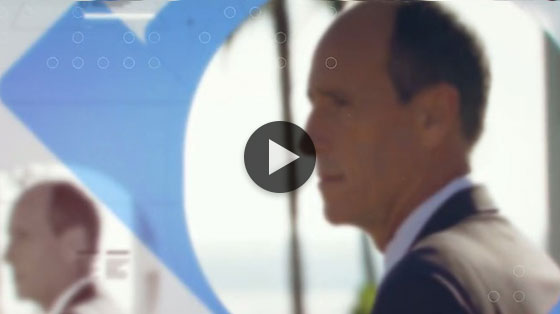