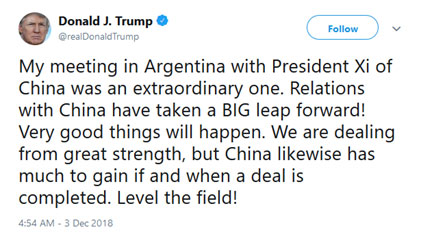 He was referring to a handshake deal brokered with Chinese President Xi Jinping during the G20 Summit in Buenos Aires over the weekend.

On Sunday, Trump tweeted: “China has agreed to reduce and remove tariffs on cars coming into China from the U.S. Currently the tariff is 40%.” And he called the informal agreement “one of the largest deals ever made.”

Word from the Chinese media differed, though. They said that a tariff deal is conditional on the two countries resolving key issues within 90 days.

Regardless, markets soared on the news.

Those are large one-day moves for companies of that size.

(However, these moves reversed on Tuesday… Caterpillar and Micron traded below their pre-trade agreement announcement closes last Friday.)

Trump’s announcement will be a big win for Wall Street… if a trade deal is actually signed. Free trade is good for business, especially for large U.S. multinationals.

But an official trade agreement still isn’t on the books yet. And the markets just signaled they’re uncertain if that will happen. So before we can buy the rumor, we need to watch for one important thing this week.

We’ll get to that in a moment. But first…

Regular Daily readers know that we’ve expected President Trump to make some trade deals before the end of the year. We first brought you our theory in July 2018.

At the time, we said the president’s master plan is to work out trade deals with his adversaries ahead of the fall midterm elections. The goal was to help the Republican Party retain control of Congress by showing a strong economy.

This summer, Trump struck trade deals with Canada, Mexico, and the European Union.  However, it wasn’t enough to help the GOP hold onto the House, as it lost more than 40 seats—though his party did expand its advantage in the Senate.

Our point was that Trump would try to get some deals through (he did)… not that those deals would necessarily result in a complete GOP victory. (But as we pointed out above, the party did add a few seats in the Senate.)

The market appeared to like those initial trade deals, rising 8% from mid-July to October. Then, uncertainty over the midterm elections, negative investor sentiment, and fears of trade wars and rising interest rates set in—sinking the market 11%.

But with the midterms now behind him, Trump is turning his sights to his own re-election in 2020. A divided Congress will make it harder for him to pass any kind of economic stimulus, which could hinder his chances to win the White House again.

So the easiest (and maybe only) way for Trump to stimulate the economy between now and then is through bilateral trade deals.

Now, I know the Chinese trade deal isn’t official yet. Trump said that he agreed with Xi to pause tariff hikes for 90 days. Much remains to be seen. But it’s a start… and the market signaled on Monday that it would like Trump to strike a deal.

What to Look for Next…

To see what’s going to happen next, we should look at how the market reacts during the rest of the week to Trump’s announcement of a China trade deal.

We won’t be able to do anything today because the markets are closed to honor former President George H.W. Bush, who passed away last week. But pay close attention to the price action on Thursday and Friday.

If investors resume buying shares, that could signal the current market correction is over. But if investors sell further and drive the price back below the market’s 200-day moving average, it’s a signal that we’re still in correction mode.

Pay attention to the investor reaction the rest of the week… And let the market tell you which way it wants to go.

P.S. After watching Tuesday’s market action, I’m leaning towards thinking the market is still correcting. The S&P 500 fell about 3% and is back below the important 200-day moving average. Continue to be careful.