The vitriol between Republicans and Democrats is seeping into everyday life. For instance:

The only thing Republicans and Democrats seem to agree on is that political divisions are a serious problem in America. According to an NBC News/Wall Street Journal poll, 80% of people say the country is “mainly” or “totally” divided.

The political divide is worrisome—and it’ll likely get worse as both sides dig in their heels. But our job at the Daily isn’t to referee these fights. (In fact, we actually think less politics is the answer to our political divisions.)

The chasm between the left and right will continue to grow—there’s nothing we can do about that. But it does present investment opportunities for people like you and me.

People are separating themselves into two teams: Republicans and Democrats. And they’re acting like archrivals.

Each side hates the other—and thinks each other’s ideas are ridiculous. The political mantra today is: “It’s our way or the highway.”

That makes working together impossible. In fact, I’d bet a lot of money that Congress will pass fewer bipartisan bills this year than it did a decade ago. With the House and Senate split, gridlock is the new normal in Washington.

The Wall Isn’t the Only Stalemate

The public’s pessimism about partisan relations in Washington is now greater than it was after the three prior midterm elections. And if the recent, record-long federal government shutdown is any indication, the public has reason to worry.

The stalemate over funding for a wall along the U.S.-Mexico border is the biggest policy impasse in D.C. And President Trump’s national emergency declaration to build a wall will likely be tied up in court for months or even years. So expect more gridlock.

And here are three other major policies lawmakers will battle over—along with the investing implications for each:

Republicans couldn’t even repeal Obamacare when they had control of both the House and Senate. Admittedly, that’s hard to do. Once the government provides benefits to people, it’s politically challenging to take those benefits away. Besides, Republicans didn’t have a better alternative at the time.

The movement to repeal Obamacare is doomed; I expect the legislation will still be around for years in some form or another.

Now, the biggest winners under Obamacare are healthcare companies. Hospitals and insurance companies instantly got 30 million new, profitable customers. And they’re going to be sticking around.

You can take advantage of this with the Health Care Select Sector SPDR Fund (XLV).

Outside of Social Security and Medicare, the military is the next biggest item on the federal budget. The U.S. spends more on its military than the next 10 countries combined.

And although he’s not a foreign policy hawk, President Trump supports a strong military. Last year, the U.S. budgeted a record $716 billion in military spending.

It’s now considered anti-American to even consider cutting military spending. If you do, you aren’t “supporting the troops.” No Republicans—and very few Democrats—would vote to cut the military budget.

The way to play this is to buy defense companies. The easiest, one-click way to get exposure is through the iShares U.S. Aerospace & Defense ETF (ITA).

In the past, Republicans at least pretended to care about budget deficits. But it seems they’ve given up on that, too. Last year, President Trump oversaw a $779 billion deficit. And the projected deficit for 2019 is $985 billion.

Democrats have made no pretenses about deficits—they’re all for them. With their recent embrace of Modern Monetary Theory, they’re going to push for even more government spending. And more spending will increase inflation.

The best defense for investors is to buy gold. We recommend physical gold as a hedge against inflation. But if you prefer to buy gold through your brokerage account, consider the Sprott Physical Gold Trust (PHYS). It backs up each share with physical gold.

With the political divide increasing in Washington, I don’t expect any meaningful legislation to get passed this year.

Since it’s predictable, the gridlock does make investing a bit easier. We know where the government will spend funds and where it won’t.

That means we can follow the money and comfortably invest in certain sectors.

P.S. Most Americans believe the political divide is a major problem in the United States. How are you dealing with the political gridlock? Tell us right here…

Nick’s Note: When it comes to getting a “technical” analysis of the market, I follow PBRG friend and master trader Jeff Clark. Regular readers know that Jeff ran a private money management firm in Silicon Valley for an exclusive group of about 100 wealthy clients. It was there that he perfected his technique for reading stock charts.

The Next Big Move for Bitcoin

Have you noticed that nobody seems to talk about bitcoin anymore?

That’s what happens after a long, drawn-out decline in any asset. Folks get tired of calling for a bottom, hoping for a bounce, and trying to time the next big rally. They give up… shut up… and move on to other things.

But that’s usually about the time when the asset starts to rally.

So the recent silence in the bitcoin world is probably a bullish sign. And it just so happens that the chart is starting to look bullish, too. Take a look… 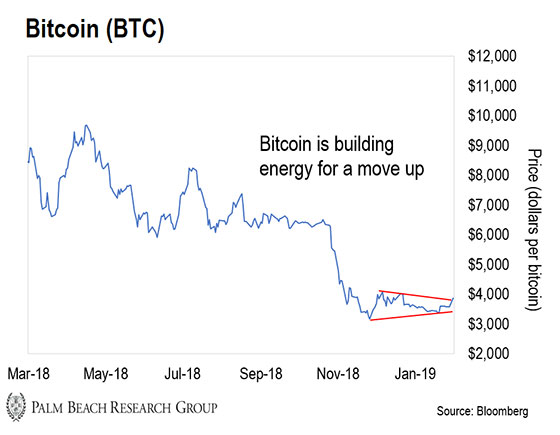 For all of last year, this chart remained in a pattern of lower lows and lower highs. That’s a downtrend—and it pressed the price of bitcoin down from a high of nearly $20,000 in 2017 to a low near $3,200.

The pattern over the past two months, though, has morphed into a “consolidating triangle.” This pattern is created when a chart chops back and forth in a relatively tight trading range, and it serves to build energy for the next big move.

If you look closely, you’ll notice that bitcoin appears to have broken above the resistance line of this triangle. So there’s plenty of energy to fuel a large move.

The last time this chart displayed a similar pattern was back in November 2018. Bitcoin had chopped back and forth in a tight trading range for a few months. The moving averages were coiled together. And then, we got a big move—lower.

This time, though, with bitcoin having recently broken above the resistance line of the triangle, it looks to me like the odds favor the next big move for this cryptocurrency to be higher.

It wouldn’t surprise me to see bitcoin trading back near its December 2018 high of about $4,200 within the next few weeks.

Nick’s Note: If you know Jeff, you know that he doesn’t usually make public appearances. But recently, he made an exception…

He had an idea that he just needed to get out there. So he got together with a select group of investors and delivered a talk detailing a specific strategy.

It’s one that Jeff’s used throughout his life to navigate market booms and busts… start his own money management firm… become the dean at a California business school… and retire 25 years early.

I think it’s essential viewing for anyone with money in the market right now. And you can check out his presentation right here… 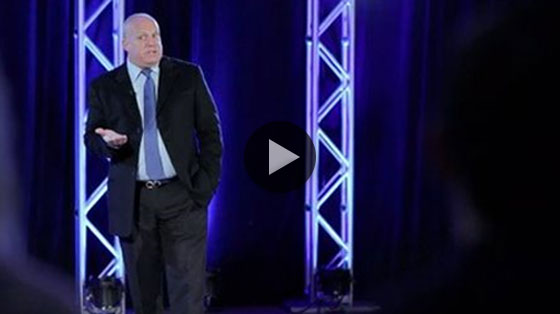