In 2019, the market for legal cannabis stocks was “dead in the water”… at least according to Forbes. And if you’d only read the headlines or glanced at stock prices, you’d probably think they were right.

After all, the Horizons Marijuana Life Sciences Index (HMLSF) – a fund with holdings in over two dozen legal cannabis companies – ended that year about 50% lower than it started…

And stocks like Canopy Growth (CGC) underperformed the general market by 53%.

But at PBRG, we didn’t fall for the fake-news hype… After countless hours of independent research, we saw an undeniable megatrend in legal cannabis that would overcome the minor stumbling blocks the mainstream media was obsessed with.

And a little more than a year later, we’re seeing the signs of that trend. Cannabis stocks are on the move again… Canopy is up more than 200% in the last 12 months… HMLSF is up 105% in just six months… and these gains are only the beginning.

Today, I’m going to share why cannabis stocks have much bigger upside ahead… And I’ll also share a special “blueprint” that offers even more upside than traditional investing returns.

Since the initial stages of cannabis legalization in 2012, sales have never stopped climbing… But you’d never know that by looking at shares of cannabis companies. Take a look at the chart below. It plots the price of HMLSF versus total cannabis sales over the same period: 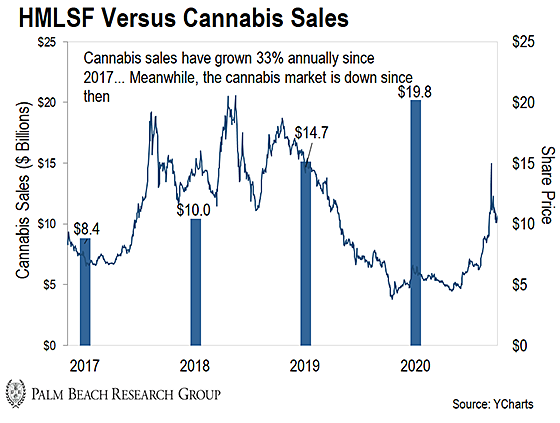 All told, the legal cannabis market grew from $8.4 billion in sales in 2017 to $19.8 billion in sales last year. That’s a 33% annual growth rate. And it’s expected to continue growing at a similar rate to over $24 billion this year.

As you can see above, enthusiasm for cannabis stocks reached a fever-pitch in 2018. But that all came crashing down through 2019 and bottomed last year…

Slow initial sales in Canada and a vaping crisis in the United States combined to dampen investor sentiment. And like many other companies, cannabis stocks were hit hard by the COVID-19 pandemic.

But as the chart shows, sentiment is rebounding. That makes this recent pullback a great buying opportunity we can get into before the market takes off again.

And the future for cannabis is looking bright.

A Billion-Dollar Wave Is Coming

There are many reasons why we’re still bullish on legal cannabis.

Add to this list the fact that New Jersey and Virginia just passed legalization measures, and you have a massive domino about to hit the densely populated northeast… And we expect New York and Pennsylvania won’t be far behind.

Legal cannabis sales are expected to grow to $73.6 billion by 2027 – an annual growth rate of 20%. It’s rare to find an industry with that kind of growth potential, and right now it’s attracting big money into the sector.

Last month, one of the largest cannabis producers in the U.S. quietly took a $100 million check from an anonymous institutional investor. It’s not a story you’ll hear on CNBC or Bloomberg… It doesn’t fit the media’s narrative of cannabis stocks being a fringe investment.

But this huge influx of cash is a sign that the sector is maturing.

Institutional investors are the big players. These are pension funds with trillions of dollars… or elite families with hundreds of billions. They want to grow their money year in and year out without worry of losing it all on a questionable speculative investment.

So as legal cannabis sales continue to rise, this growth will see these investors move billions of dollars into the sector. That cash will extend the rally in cannabis… and bring about even more opportunities for investment in the sector.

Like the crypto market, we expect the cannabis market to explode again. And the next cannabis bull market will make the previous one seem like chump change.

If you want to take advantage of this trend, consider a stake in HMLSF. It contains over 25 of the top cannabis companies today, and it will continue to rise as this market takes off.

P.S. Now, you could get broad exposure to the cannabis market through HMLSF. But to really move the needle on your net worth, you want to buy cannabis companies before they go public.

At least 14 cannabis companies have filed for initial public offerings (IPOs) this year… And we expect many more to go public as well.

That’s why Daily editor Teeka Tiwari put together a special presentation on how to get into these private companies while they’re still on the ground floor. He calls this the “Blueprint Path” to life-changing gains.

In fact, Teeka gave his subscribers a chance to get in one pre-IPO cannabis company at just 50 cents. And when it went public last November, they had the chance to make triple-digit gains of about 149%.

Right now, Teeka has four pre-IPO deals open, including two in the cannabis space. But they won’t stay open long. And once the window of opportunity closes, they’ll be gone for good.

So click here to watch Teeka’s presentation… and take your first steps on the Blueprint Path to life-changing gains.