President Trump is playing the mainstream media like a fiddle.

Notice anything about these recent headlines?

What do all three of these headlines have in common? They stir up emotions… but have no real effect on 99% of people. Most of us aren’t getting deported, nor is the wall going to change our daily activities.

Like a magician, Trump’s sleight of hand has people looking one way, while the real action happens elsewhere.

You see, Trump is the master of manipulating the media and controlling the message. Those headlines are all decoys. People like reading these emotional stories because they’re easier to digest and react to.

But in doing so, they’re missing what’s really important…

We can find the real stories buried deep in the economy sections of The Wall Street Journal, for example. Here, we see what’s really going on—the real issues that will impact everyone where it hits the hardest: their wallets.

Let’s break these two orders down…

In response to the financial calamity in 2008, lawmakers passed the Dodd-Frank Wall Street Reform and Consumer Protection Act. It proposed more thorough monitoring of banks in order to prevent them from high-risk activities.

Proponents said it was necessary to rein in banks and keep them from becoming “too big” and needing bailouts.

But the Act didn’t stop banks from becoming “too big to fail.” And the 2,300 pages of regulations put too many unnecessary restrictions on big banks. The regulations were too burdensome on small community banks, as well, forcing them to merge with larger ones just to survive.

This resulted in even bigger banks than before.

As for the Fiduciary Rule, Obama intended for it to take effect this April. The rule would prevent financial advisers from putting client money in mutual funds or annuities in order to get bigger commissions.

At face value, this seems like a beneficial rule. But the Fiduciary Rule can restrict what advisers can do for their clients.

For example: If an adviser wanted to put a client in a certain fund with high fees, he would have to justify it. And if the investment tanks, the adviser could face a lawsuit. Why would the adviser even bother… though it might have been a sound strategy?

This might explain why advisers have been putting more people into basic, one-size-fits-all plans—not always a good thing.

But now, thanks to Trump’s plan, they may be able to earn that money.

And that’s part of why financial stocks are up so much since the election. As you can see in the chart below, the SPDR Financial Select Sector ETF (XLF) has outperformed the S&P 500 ETF (SPY) by 11% since Election Day. 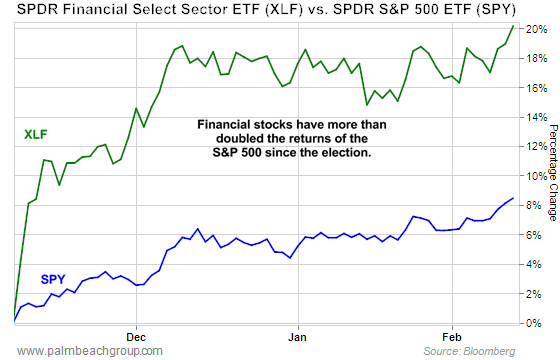 This is the real story.

While more emotional stories dominate the headlines, Trump is getting the “important” work done with almost no resistance.

Bet on Trump continuing to manipulate the media and having everyone look the wrong way.

The next time you sit down to watch your favorite news show… or scan the front pages of The Wall Street Journal… try looking through the noise.

The message is clear: Financial regulations could soon be diminishing. If these regulations are delayed or rolled back, look to buy banks and investment management firms.

P.S. Seeing financial stocks up 21% might make you think you’ve missed the party. But you haven’t. I’ll show you tomorrow that banks are far from expensive right now…

On Monday, I delivered the final step to my three-step method for picking elite companies…

One of the longest holdings in our cheap, elite portfolio is Lear Corp. (LEA).

According to our model portfolio, it became a holding starting in February 2015. And it’s remained cheap ever since.

The chart below shows LEA’s performance and how quality companies can grow our wealth at about 21% a year. 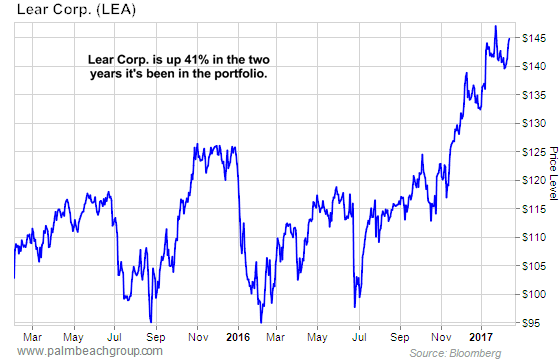 Not all positions stay in our model portfolio that long. Many go up in price and become expensive far before then. But this is a perfect example of the power of buying elite companies when they’re cheap.

The First-Ever Government Blockchain Program: Last week, the Republic of Georgia committed to adopting blockchain technology as a platform for validating property-related government transactions. The Georgian government and Bitcoin developer Bitfury Group agreed to co-develop a private blockchain for submitting land titles and use a Bitcoin-based blockchain to verify them. They plan to use this system for nearly all future real estate transactions. This move should be a huge boon for blockchain technology and another indicator of its imminent adoption spike.

Monte dei Paschi’s Dried-Up Grape Vines: Millions of Banca Monte dei Paschi di Siena’s near €360 billion in nonperforming loans sits tied up in a group of foreclosed wineries in the Maremma region of southwest Tuscany. With Monte dei Paschi reportedly needing another €8.8 billion in bailouts to repair its balance sheets, those grapes will likely stay sour. Keep an eye on Italy’s debt contagion as it slowly spreads through Europe, and be prepared if it makes its way across the Atlantic.

Border Tax = Cheaper Energy… for Most: President Trump’s proposed border tax could bring relief to half of the world’s energy consumers… but not the U.S. That’s according to a new report by Goldman Sachs analysts, suggesting that the proposed border tax would cause the dollar to appreciate, bringing down coal and liquefied natural gas (LNG) prices for foreign importers. But American energy consumers, who hardly rely on imported coal and LNG, may not see much difference. If this is signaling the dawn of “peak globalization,” the U.S. could take a hit.

Editor’s Note: Are you in favor of the new administration’s proposed border tax? Let us know why or why not right here.

Editor’s Note: Nick’s essay series on picking elite companies has been a hit with readers this past week… and they’re clamoring for more.

From Kevin M.: I wanted to tell you that the addition of Nick to The Palm Beach Daily is absolutely incredible. He is adding serious value each and every time he writes. This doubled the value of this daily. Thank you for never ending your pursuit of perfection!

From John H.: Enjoyed all three articles on high-ROIC companies… keep them coming.

Nick’s Reply: Thanks, guys! It’s great to hear you are enjoying the new Daily. The feedback we received about these elite businesses has been incredible.

As always, if there’s anything you’d like to hear about, we’re always open to suggestions.

From Lance F.: Please keep posting your information and lists of the fastest-growing profitable and cheap companies! That is the kind of research that made me an Infinity Member!

Good news, Lance… If you’ve been following our series, be sure to read the Daily later this week. Nick has something special to share with you…