Editor’s Note: With 2016 in the history books, PBRG options analyst William Mikula takes a look back at the performance of Palm Beach Income. Spoiler alert: We couldn’t be happier with our trading results…

Think back to this time last year… The market was stumbling through its worst start to a calendar year. Ever.

Investors panicked as the S&P 500 crashed nearly 9.2% from January 1 through market close on February 11. The market’s fear gauge—the VIX—spiked nearly 50% in that time frame.

After hitting bottom in mid-February, the market had bounced 16.2% by early June… and it seemed like nothing but clear skies ahead.

Mainstream analysts and pundits were blindsided by Britain’s decision to exit the European Union. In a close vote, citizens voted to reject the status quo and chart a new path.

As you know, the market hates uncertainty above all else. So on the heels of Brexit, the S&P 500 promptly dropped 5.3% in nearly five days of trading at the end of June.

After recovering from this temporary shock, the market grinded sideways from July until the week before the U.S. presidential election.

Whenever it seemed like Donald Trump had the lead in the polls, the market would sell off a bit. When Hillary would edge out a lead, we’d see a little rally. But nothing significant in terms of volume, breadth, or follow-through.

Then, on the night of the election (Tuesday, November 8), market futures dropped drastically as it became clear that Donald Trump would clinch a surprising win.

But suddenly—as the U.S. market opened for business on the morning of November 9—the market recovered its losses… then shot higher without looking back as 2016 came to a close.

Here’s a one-year chart of the S&P 500 with the major events we just described highlighted: 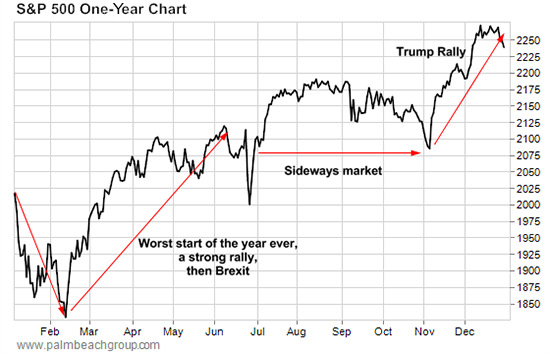 The majority of these gains came after the election finally came to a close (from November 10–December 31), as the market was otherwise cruising toward a lackluster year before the surprise outcome.

We’ll be curious to see how individual investors did in 2016 as soon as research firm Dalbar releases results. Our suspicion is that average investors probably let emotions get the better of them and bought and sold at all the wrong times.

But at the end of the day—although tumultuous—the market still managed to lock in a good year based on returns.

So… the question becomes: How did Palm Beach Income do compared to the overall market? And most importantly, did our subscribers have an edge over average investors?

Spoiler alert: We could not be happier with our trading results for 2016. Why?

Of those 34 low-ball offers, the market accepted our offers to purchase shares at a discount four times. This meant our offers expired worthless (a good result) 88.2% of the time.

For these 34 closed trades, 100% closed as winners (even the four where the market initially accepted our offer).

Our average annualized full-cycle return for all 34 closed trades was 18%. This is a full 6.8 percentage points over the S&P 500 (in other words, outperformance of 60%).

The S&P 500 is our main benchmark for comparisons because it contains the type of large, dominant companies we typically trade.

Our average holding time per trade was 46.3 days (a little over a month and a half).

Not counting commissions, if someone sold one contract on every trade we made in 2016, he or she would have collected $3,510 in income. If he or she sold five contracts, that would translate to $17,500 in income.

And for our subscribers with larger accounts, if they’d sold 10 contracts per trade, they would’ve banked $35,100 in income for the year.

Now, as regular readers know, we don’t try to reach for home runs on every trade. Our goal is to hit consistent singles and doubles with the occasional home run thrown in. All in an effort to beat the S&P 500 index each year.

By doing so, we provide value to our PBN subscribers.

Here are a few charts that show our important statistics from 2016: 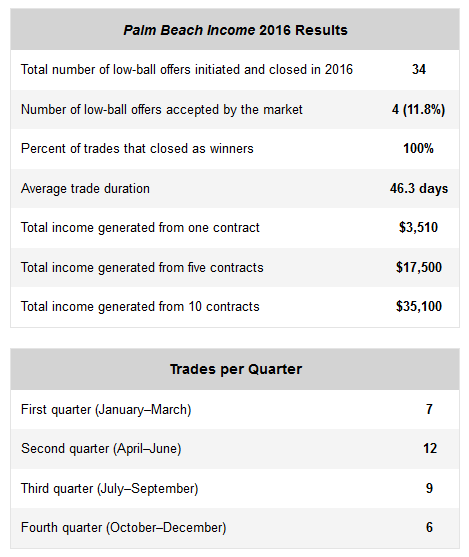 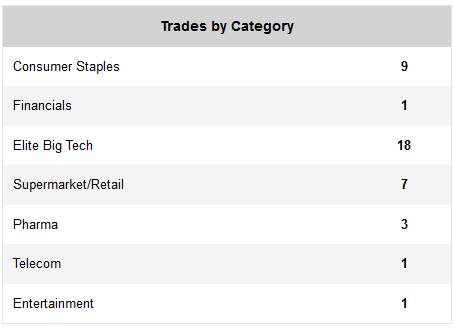 All right, we hit our goal in 2016 with a high win rate and a high double-digit annualized return. But the question many people may have is: How did we do it?

If we could boil it down to a couple of sentences it would be: We removed emotions from the equation. And we stuck to our trading system.

That sounds simple, we know.

But think about how hard it is in practice. When your co-workers were panicking around the water cooler during the January sell-off, frantically refreshing their brokerage account screens, were you tempted to sell?

When your friends at the bar asked you, “What the heck is a Brexit, and why is it causing my 401(k) to crash?”… did you check your brokerage account… see red splashed across the screen… and panic?

And when friends and family members were going wild one way or another about the U.S. presidential election, did you find yourself swayed by emotion?

If you did, look back at our past issues in 2016. (PBN subscribers can click here to read past issues. If you’re not a subscriber, you can learn how to sign up here.)

We don’t have a crystal ball. But we were able to enjoy such remarkable success because we stuck to our winning system that has taken us tremendous time and resources to develop.

For example, we used the sell-off in January to strike with six new trades. With fear running rampant, we received thick cash payouts. All trades closed as winners, and we banked an average annualized return of 17%.

Then, when Brexit struck, we dug deeper. Our thinking was that this was a classic—although larger than normal—Wall Street Overreaction. We struck accordingly.

[A “Wall Street Overreaction” trade is when Wall Street goes crazy over what we perceive to be a minor, easily fixable event.]

We traded around the sideways market of July–October by using our Sharpshooter Approach.

With this approach, we scour the market for profitable one-off situations. So while the VIX is low, we find individual setups that pay off handsomely.

And we’ve ridden the Trump Rally from the end of 2016 to today by closing out profitable trades and freeing up capital to strike once the conditions are right.

Time will tell how 2017 plays out. At the outset, we’re watching a few major catalysts…

How smooth will President Trump’s first 100 days in office be? Will the Fed remain aggressive on rate hikes, or will it back down a bit? Will more countries in Europe vote for change in their relationship with the EU?

Remember, these items—and many more—have the potential to cause regular investors to panic… and the VIX to spike.

But if you subscribe to Palm Beach Income, you won’t be a regular investor. You’ll be a calm, confident options trader. And you’ll use our trading strategies to wring income from the market month after month.

On January 20th, Donald Trump wrote his name into history as America’s 45th president. But what happens after that could change everything…

This is so critical that longtime PBRG friend Doug Casey recently issued a shocking warning… Click here for the cold, hard truth you won’t hear on Fox, CNN, or anywhere else. 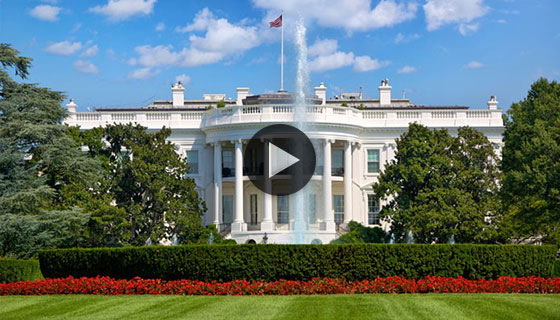