The last few weeks have been rough for Tesla…

Regular readers know that I’m no fan of the electric automaker. Last August, I predicted the market would punish the company because it wouldn’t meet its lofty production goals.

Initially, my prediction looked off. Tesla popped the following day on earnings… which were terrible, but Tesla said they were still on target to meet production goals.

But now Wall Street is catching on to what I said: It’s impossible to meet those goals. Tesla shares are down 18% since then… 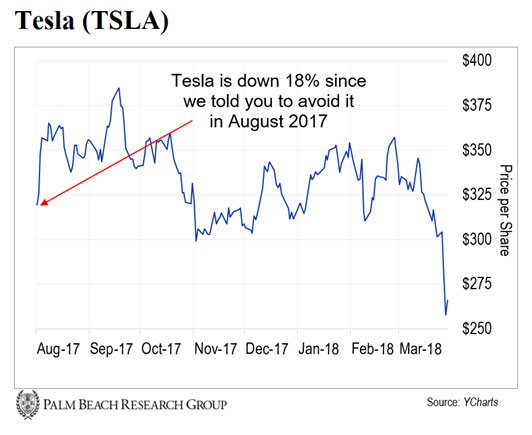 If you followed my advice at the time and avoided Tesla (or sold shares), you would have avoided a nearly 20% loss.

But here’s the thing… I think Tesla is going even lower. And that’s giving us a chance to make a quick profit.

Admittedly, this play isn’t for everyone. It’s riskier than the trades we usually suggest in the Daily.

But if you follow our asset allocation strategy and have set aside a small amount for Smart Speculations, you could see double-digits in a few months.

I said there was no way Tesla would meet those production goals. And it’s now clear to everyone that they won’t.

The production misses are a major problem for Tesla. That’s because fewer cars means fewer sales, which means less cash in the bank.

The company is burning an amazing amount of money. Last year, Tesla’s free cash flow—the cash (or lack of cash) after paying all the bills—was negative $3.5 billion.

Obviously, no company can burn billions of dollars and survive for long.

If Tesla keeps spending at that rate, it will run out of cash—most likely by the end of the year. The company will either have to issue new bonds or sell more shares to raise money.

But selling bonds may no longer be a viable strategy.

Bondholders Are Getting Jittery

That’s a lot of debt for any unprofitable company. And it’s raising eyebrows on Wall Street.

But bondholders aren’t waiting for another downgrade, though. They’re selling now.

You see, bondholders are “smart money” because they’re generally professional investors. So the chart below should worry all Tesla investors: 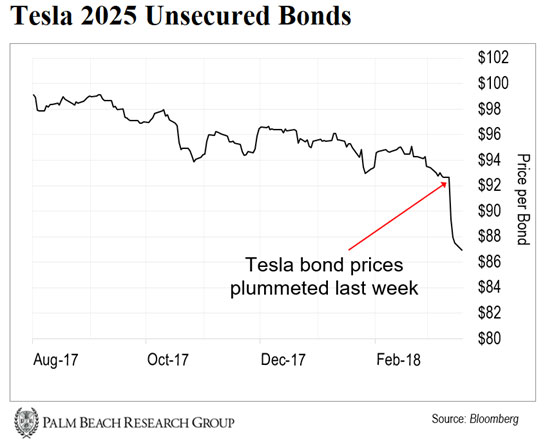 Despite the fluctuations in Tesla’s stock price over the past couple of years, its bonds have always traded between $93 and $100. But prices plummeted below $88 last week.

That means the smart money is getting very worried about Tesla’s ability to make enough cash to pay back the bonds.

How to Profit From Tesla’s Woes

Tesla has many flaws in its business strategy. Its stock is heading lower.

And the bad news continues to roll out…

On Monday, Tesla announced it’s recalling 123,000 Model S cars because the power steering bolts in some of them were showing “excessive corrosion.” It’s the company’s biggest recall ever.

Now, nothing heads lower in a straight line. All it takes for Tesla’s stock to pop a little is for CEO Elon Musk to tweet a bold prediction.

But with all its woes, Tesla could easily drop another 25% in the short term.

If you are an aggressive trader, you could consider initiating a short position here. But shorts are risky. So if you take one, make it a small position.

P.S. We generally recommend allocating no more than 5% of your asset allocation to Smart Speculations, such as shorts. Palm Beach Letter subscribers can view our entire asset allocation guide right here.

Do you have your own asset allocation model? If so, tell us how it works right here.

On March 19, a self-driving Uber car hit and killed a pedestrian in Tempe, Arizona. A few days later, a Tesla vehicle on autopilot crashed in California, killing the driver.

Nvidia makes chips that go into driverless car technology. After the accidents, the company announced it’s suspending its own self-driving car tests. 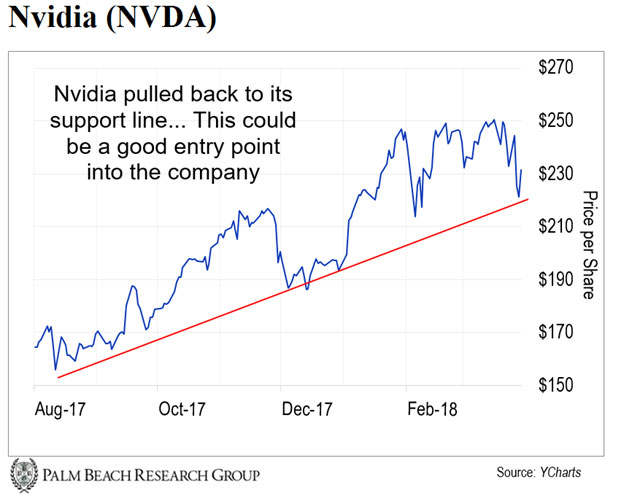 But as you can see, Nvidia is bouncing off its support line. This looks like it could be a good entry point into the company.

Nvidia is at the forefront of many of the biggest trends in technology. Not only is it a major player in driverless technology… it’s also a leader in virtual reality, video gaming, robotics, and cryptocurrency mining.

Nvidia is doing the right thing by suspending tests until it makes sure its technology is safe. This should be just a small hiccup in its growth.

Hidden inside 5-billion-year-old bacteria, scientists have discovered the key to unlocking the secrets of DNA…

This could end genetic disease, save the global food supply, and grant us energy independence. Only three companies hold all the key patents. 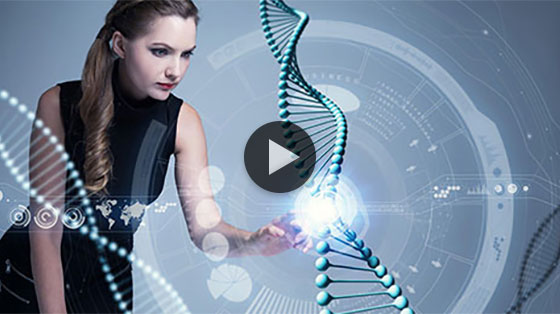