Bitcoin is up over 332% since Palm Beach Letter editor Teeka Tiwari recommended it last year.

Two of the cryptocurrencies in the Palm Beach Letter portfolio are up 916% and 947%, respectively.

No wonder we’re getting letters from readers like William N., who just let us know he’s up $28,000 over the past two weeks.

And from Robert G., who told us he’s made over $45,000 on his cryptocurrency investments so far.

We’ve received countless other emails like this from readers who’ve made a ton of money playing the profitable cryptocurrency trend.

Congratulations if you had enough guts to jump into this exciting new market.

But there is a downside to all this success…

At some point, we’ll want to take profits. And that leads to a very common question…

Cryptocurrencies Are Not Tax Havens

Our mission at PBD is to help you get a bit richer every day. And we recommend a number of wealth-generating ideas—from income-producing stocks to tax liens—to help you do that.

Like any other income you make from our ideas, your gains on cryptocurrencies are subject to taxation by the IRS.

However, cryptocurrencies are so new that many people don’t know how to treat them for tax purposes.

So we reached out to an expert in this space to explain some of the basics. In a moment, we’ll share a few tips he gave us.

But first, we need to dispel a popular misconception about cryptocurrencies.

They are not a tax haven. You can’t use them to hide income from the IRS.

In March, the IRS requested transaction records from Coinbase—a popular exchange for buying and selling bitcoins.

Once the IRS gets Coinbase’s transaction records, it can check for people trying to evade taxes by storing money in bitcoin.

Don’t try to hide your gains from the taxman. He could trace your bitcoins back to you.

If you don’t want problems with the IRS, here are some steps you can take…

(Important note: We’re not lawyers and this is not legal advice. Before taking any action, you should consult with a qualified tax professional.)

Bitcoins Are Considered Property, Not Equity

Since cryptocurrencies are a new asset class, there isn’t a lot of clear guidance on how to pay taxes on their gains.

So I reached out to Tyson Cross.

Tyson is a tax attorney and founder of Cross Law in Reno, Nevada. He’s carved out a little niche for himself in the cryptocurrency tax space.

According to Tyson, the IRS classifies cryptocurrencies as property. That means they are treated more like real estate than stocks for tax purposes.

He says cryptocurrency owners should keep a careful record of their gains.

Here are a few steps Tyson said you can take to make filing easier:

It’s easy to track your cost basis if you made only one purchase. But it gets confusing with multiple purchases.

One good place to calculate the cost basis of your cryptocurrencies is Bitcoin Taxes. You can download a free tax calculator from the website.

(The free version allows you to track up to 100 transactions. If you want to track more than that, you have to pay for the premium version.)

For example… if you use bitcoins to buy your daily cup of coffee, you need to report each and every coffee purchase. (That’s because every time you convert bitcoin into dollars to purchase something, you’re making a potential gain on the conversion.)

We recommend bitcoin as a buy-and-hold investment, not for everyday purchases. So this shouldn’t affect most bitcoin investors.

Bottom line: Cross says don’t try to avoid paying taxes on cryptocurrencies just because the government can’t track you yet. It’s possible for the IRS to go back and find all your transactions.

Cryptocurrencies are exciting, but the tax implications for this new asset class can be daunting. But don’t be intimidated and miss out on the potential life-changing gains.

Eventually, the process will get smoother.

If you have questions about the tax implications of your cryptocurrency gains, you should contact a qualified tax professional. You can also check out the Cross Law Group right here.

The “Trump trade” has reset…

The Trump trade was a bet that certain industries would thrive under President Trump’s policies while others would struggle. 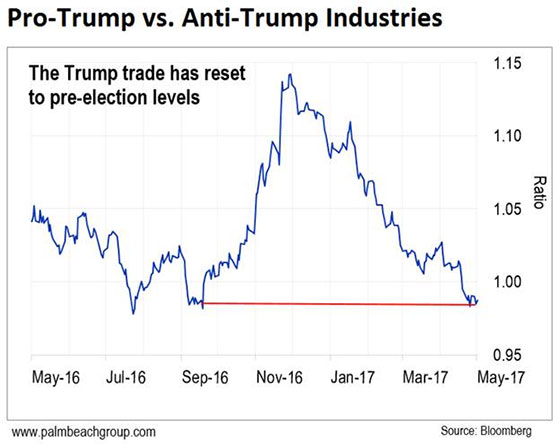 But since then, Trump has had numerous political setbacks. And health care and technology stocks have rallied to catch the pro-Trump industries.

Now we’re back at square one.

If you think Trump can move his agenda forward, you have another opportunity to get in on the Trump trade.

To do that, consider buying exchange-traded funds (ETFs) that track pro-Trump industries.