That’s what my friend Josh said over dinner a few weeks ago in Chicago.

I was there scouting money-making opportunities for our PBRG readers. And contacting my insiders on the ground is part of my due diligence before investing in any market.

You see, Josh is a top salesman for a medical technology company. His travels take him all over the Windy City and give him unique insights about its economy.

And the last time we talked, Josh was disillusioned. A combination of high (and increasing) taxes and expensive real estate took its toll. So he was looking to move elsewhere.

But now, his plans have been upended.

“The new lease was in my inbox and my bags were packed. But [this law] changed everything,” he told me.

And today, I’ll reveal the new law keeping Josh in Chicago—and why it could hand investors across the country big profits…

On June 25, 2019, Illinois became the 11th state to legalize recreational marijuana. It’s now the second-largest legal market in the country behind California. And it’s the third-largest in the world behind only California and Canada.

That’s why Josh backed out of his new lease in Wisconsin. With his success in medical sales, he wants to get involved in Chicago’s exploding cannabis market.

And it’s no wonder why…

According to a Chicago Sun-Times report, the total mature-market marijuana industry in Illinois could generate $1.7–2.6 billion per year in revenue.

Now, there are plenty of opportunities in Illinois for savvy entrepreneurs like Josh. But this is just the tip of the iceberg.

Unlike other states legalizing medical and recreational marijuana at the ballot box, Illinois is the first to legalize it via its legislature.

Here’s why that matters: The law had bipartisan support.

The path for federal legalization will require a bipartisan effort, too. And Illinois just proved it can be done.

And at the federal level, dozens of marijuana legalization bills are weaving their way through Congress as lawmakers finally catch up to public sentiment… 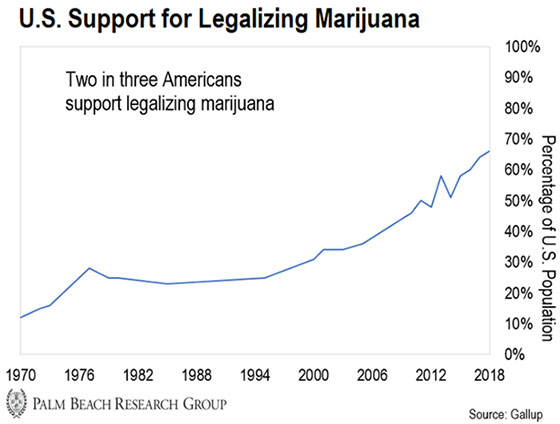 Now, not enough members in Congress are on board with nationwide legalization just yet. Plus, some states still haven’t legalized pot in any form. Forcing legalization onto them could do more harm than good.

So the answer is a middle ground: the “test run.”

For example, lawmakers introduced the Secure and Fair Enforcement (SAFE) Banking Act in March. If approved, it’d prevent the federal government from applying sanctions to banks working with cannabis businesses.

It would also allow financial institutions to invest in American pot companies without breaking federal law. And that would unleash a $340 billion tidal wave of institutional capital into this space.

Just last month, lawmakers introduced the Marijuana Opportunity Reinvestment and Expungement (MORE) Act, too. This bill would remove marijuana from the Controlled Substances Act, decriminalizing it and allowing states to write their own policies.

Now, we don’t know if or when these bills will pass… But the writing is on the wall: Marijuana will eventually be legal at the federal level.

With the majority of Americans in favor—and a growing number of politicians taking up the legalization banner—change is inevitable.

It’s important to recognize a massive trend and where you are in it. The earlier you’re in the trend, the more money you’ll make. As editor Teeka Tiwari wrote last week:

In fact, according to New Frontier Data, the global total addressable cannabis market (regulated and illicit) is a massive $344 billion.

And Merrill Lynch estimates that non-intoxicating cannabis alone will disrupt $2.6 trillion worth of industries in the next few years.

This is the definition of a massive, unstoppable trend. The good news is, we have an opportunity to profit right now from a coil of fear wrapping itself around the cannabis market’s throat.

And right now, the market is gifting us with lower prices.

You see, cannabis stocks have had a rough summer. The Horizons Marijuana Life Sciences ETF (HMLSF) is down 8.4% over the last month.

Now, we expect this type of volatility in an emerging market like cannabis. The key is to see these sell-offs as buying opportunities.

If you want to get your feet wet in this space, consider a small stake in HMLSF. It holds many companies that will benefit as regulations continue to loosen.

Remember, cannabis stocks are highly volatile. So don’t bet more than you can lose. You only need a small stake for the potential of life-changing gains.

P.S. As I mentioned above, America’s legal pot “test run” could start within weeks. When it does, it’ll flood $340 billion into U.S. pot stocks. And Teeka and I believe by making one simple move ahead of time, you could make 10 times your money.

You see, we’ve found a small company positioned to add recreational cannabis to its already popular medical line. Investors who delay could miss out on a huge windfall.

You can get the full details from Teeka right here…