As I write, we’re finishing a brutal election cycle that will likely change the political landscape for years.

As of Wednesday, it appeared Republicans would gain control of the House of Representatives, with the Senate too close to call.

If you’re a longtime reader, you know I don’t wade into the political muck. Because regardless of which side wins, the American taxpayer loses.

And as I’ll show you below, we’ll lose because there’s a “sinister” reason behind inflation most U.S. politicians won’t tell you about…

The Real “Sinister” Cause of Inflation

The sinister force I’m talking about has to do with a change in the American psyche. It’s the abandonment of American ideals.

People expect the government to take care of them from cradle to grave. They don’t believe in hard work and want a free lunch.

And it’s a major factor in determining fiscal and monetary policy.

I feel like people don’t connect this change to inflation. But it now seems as clear as day.

America is no longer the land of free enterprise. It’s more like the “land of give me free stuff.”

To be clear: I’m not saying the state shouldn’t help our senior citizens with Social Security… our veterans with medical assistance… or the neediest among us with food subsidies.

These are what I call “free lunch” programs. People who advocate for these benefits expect the government to take care of them from the cradle to the grave. They don’t believe in hard work.

Of course, this isn’t something that’s happened overnight. And both parties played a role in it this change.

Each time government spending goes haywire… the U.S. dollar comes under attack. It all started back in 1971.

In the late 1960s, President Johnson launched the “Great Society,” which involved a huge suite of welfare programs.

It increased spending so much that by the early 1970s, the government had trouble meeting its obligations.

To address rising inflation and discourage foreign governments from redeeming more and more dollars for gold… President Nixon took the U.S. dollar off the gold standard.

This allowed the government to print more money without constraint… and opened the door to even more government spending.

It’s not discussed much today… but this pivotal moment in American history set the stage for what we’re seeing now.

Since 1971, the value of our money has been under siege…

Take a look at the chart below. It shows the decline in the purchasing power of the U.S. dollar going back to 1900… 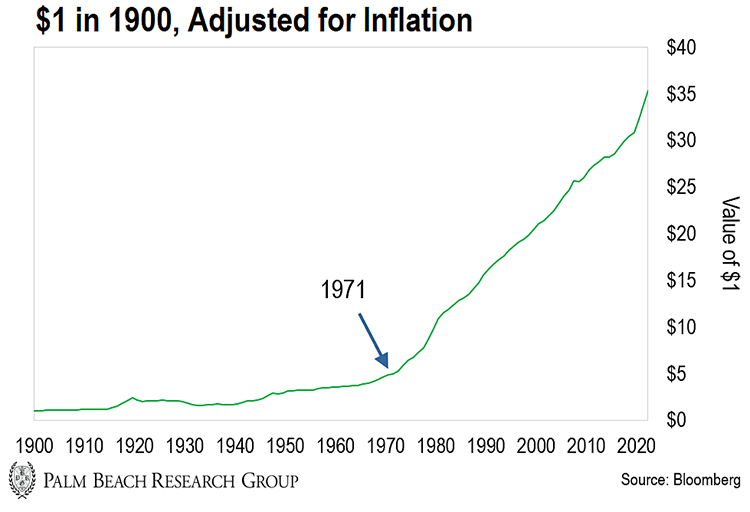 As you can see, it pretty much held its value until the early 1970s. But starting in 1971, the decline started to accelerate rapidly.

This is when what I call the New Order of Money took hold.

In this New Order, obscene money printing and out-of-control inflation pervert how money is supposed to work.

You can see that in the next chart. It shows the amount of government spending since 1900… 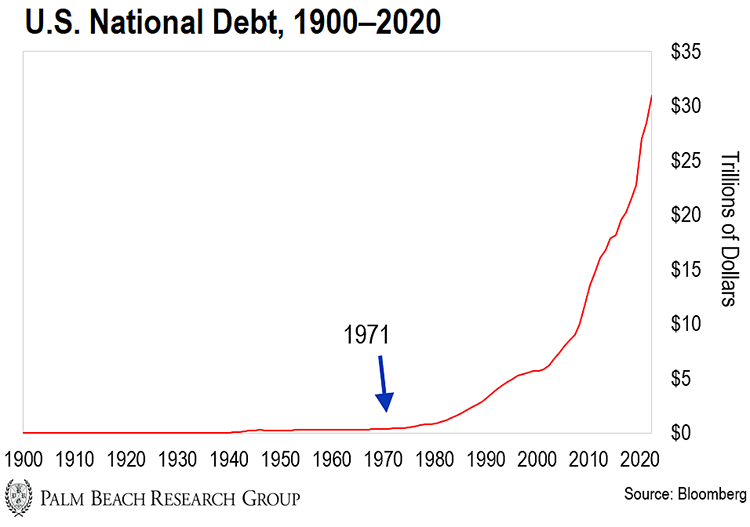 As you can see, the devaluation of our money and government spending goes hand-in-hand.

Now, this last chart really drives home the point I’m trying to make about the New Order of Money.

It shows public debt per capita. In other words, it shows the share of debt each American holds. 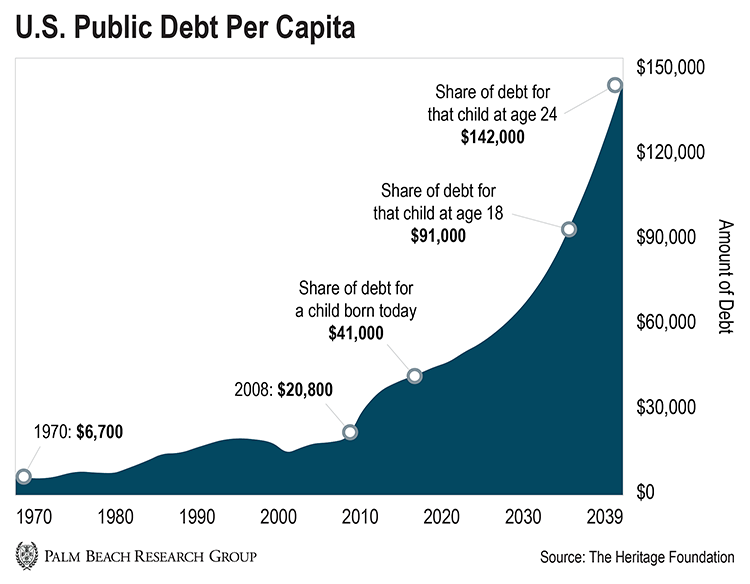 And each person in America owes this much… including you… your partner, your kids… your siblings… Even newborn babies.

Of course, you’ll never hear about this from politicians or mainstream economists. Because revealing the reality would mean they’d have to stop spending.

Friends, the government is quietly stealing your hard-earned money through inflation.

But while most people understand how bad things are with inflation… my fear is they don’t know how much worse they can get.

The Pain From Inflation Is About to Get Worse

In this New Order, you need to think outside the box to outpace inflation and build a nest egg big enough to retire comfortably.

Stocks, bonds, cryptos, and commodities have crashed… and doing nothing – like leaving your cash in a bank – means giving in to the inflation you’re trying to avoid.

Now, if you pay any attention to the news, you don’t need me to tell you all of this. But I fear that some of you think it couldn’t possibly get worse…

So please trust me when I say that it can… and that I believe it will.

Right now, a trigger on the horizon could spark what I call “The Next Lehman.”

In 2008, Lehman Brothers went from being the fourth-largest U.S. investment bank to one of the largest bankruptcy filings in U.S. history.

The bank was hundreds of billions of dollars in debt when it finally collapsed… and its losses shook the market for years to come.

I believe we’re about to experience a crisis with the potential to be 155x larger than the Lehman collapse… One that will compound the pain we’re feeling from inflation and rampant money printing.

That’s why I’m going to share all the details on this “Next Lehman” on Wednesday, November 16, at 8 p.m. ET.

It involves a little-known recession-proof asset that’s less volatile than stocks but offers massive upside… an asset that Wall Street eagerly trades while leaving you in the dark.

I’ll even discuss my “2023 Recession-Proof Portfolio” – and share the name of a stock on that list – absolutely free.

All you need to do to join me is click here to automatically reserve your spot.

Friends, our country is being dismantled by a set of beliefs that is killing the buying power of our dollars…

It’s choking the life out of innovation… and worst of all, it’s brainwashing our children to abandon personal exceptionalism in the pursuit of collective mediocrity.

This is not the America I know.

That’s why I’m hosting the Next Lehman… To give every American the information they need to survive this crisis.

Click here to automatically reserve your spot next Wednesday at 8 p.m. ET… I hope to see you there.

P.S. If you register as a VIP for my event, I’ll send you a bonus report on the three investments you need to avoid right now.

All you have to do is click here to learn more – and get your free report right away.