It’s not often I see a profitable setup in the markets like the one I’m seeing today. Let me explain…

On Tuesday, President Trump appeared to pour cold water on any pending resolution to the U.S.-China trade war.

During a NATO press conference in London, the president said: “A China trade deal is dependent on one thing: Do I want to make it?”

Then, he added: “I have no deadline… In some ways, I think it’s better to wait until after the election, if you want to know the truth. But I’m not going to say that, I just think that.”

Now, with Trump, you can’t tell whether he’s blowing smoke or stating official U.S. foreign policy. And for our purposes, it doesn’t really matter.

But his words do matter to the markets.

Here’s the thing… My stock-picking system recently picked up big-money buying in this same sector. And the last three times this happened, we saw average returns of 26% in about 12 months.

Today, I’ll tell you which sector it is – and why you should buy this dip…

I spent nearly two decades as a Wall Street trader at firms such as Cantor Fitzgerald. In fact, I was one of only a handful of people in the world who could trade $1 billion or more for big financial institutions.

Now, I couldn’t track the big money alone. So I coded computer programs to help. And when I left Wall Street, I decided to build my own stock-picking system. It cost me over $250,000 and years of my life… But it’s proven to work over and over again.

Here’s what it does…

It scans 5,500 stocks every day, using algorithms to rank each one for strength. It also looks for the signs of big-money investors. And when it sees them moving in or out of a stock, it raises a yellow flag. 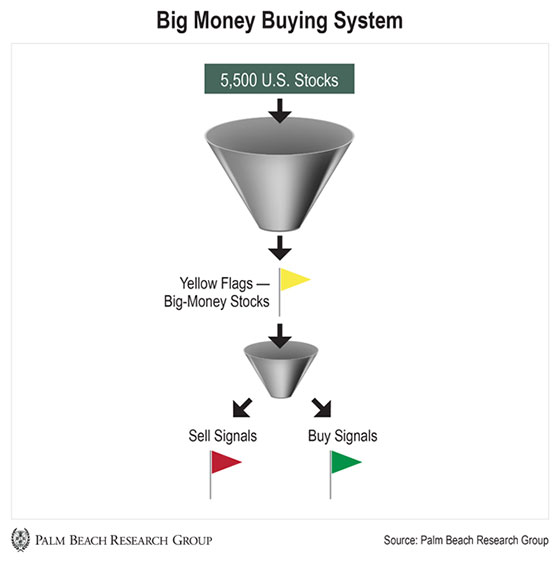 The beauty of my system is, it’s completely agnostic. It doesn’t panic. It ignores tweets, headlines, and noise. It doesn’t sell on fear or buy on fantasy.

It just follows the money…

Now, the chart below shows the Financial Select Sector SPDR Fund (XLF). It holds 67 of the top financials companies. 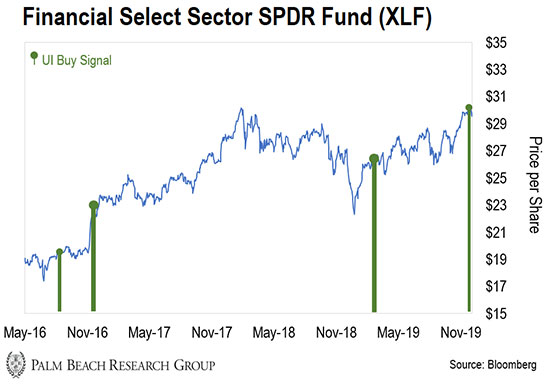 The green bars show when big buying has started. When the big money comes to play, it means big gains ahead.

The green bars appear when there’s more than twice the normal average of buying in a stock. As you can see, my system triggered on November 8. So the big buyers are back to play.

And the last three times XLF triggered my system, it marched higher. The average return a year later was an astonishing 26%.

And as I mentioned, President Trump just handed us a gift.

You see, financial stocks suffered a broad sell-off on Tuesday morning as trade-war fears sent the 10-year Treasury yield toward its biggest decline in over three years. Investors panicked, giving us an even better entry price into XLF. It’s been down as much as 2.8% since December 2.

But my system doesn’t care about any of that. It looks at one thing and one thing only: big institutional buying. And we’re seeing it again.

Financial stocks are headed higher in the coming months. So take advantage of this setup and add some financials to your portfolio today.

If you want broad exposure to the sector, consider XLF. It’ll position you for a possible 26%-plus return by this time next year.

P.S. As I mentioned above, I spent $250,000 and years of my life working on creating a stock-picking system to spot where big investors are putting their money.

That’s because their massive institutional money drives the market. They can swallow up to 4.9999% of any publicly owned company in America from the tiniest microcap to a behemoth.

My system can predict this buying activity 24 hours to 10 days in advance. And to learn how you can gain access to my system – and follow the big money to profits – just click right here to get all the details.